Did Castro Get Kennedy? 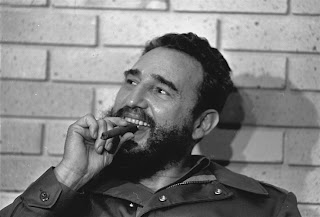 I was writing an exam for geography when Kennedy died that day.  So much of the time and place has been forgotten that needs to be recalled to properly cast the time and place we lived in at that time.  In 1963 certain perceptions were foremost and need to be described.

1                    The and the were in confrontation worldwide. What we forget is that the universal perception was that it was a confrontation of equals.  At the time, populations were comparable, military technology was similar and specific advantages were untried.  Soviet economy claimed success comparable to the west and western spy penetration was hopeless to change that.
2                    Under Khrushchev the soviets had dynamic leadership that was running rings around Kennedy in terms of flamboyance at least.  In spite of recasting later, the west was unconvincing in handling the soviets under Khrushchev.

Then there was Castro who then was less than four years in power and was under persistent attack by American agents.

This article reports on a first hand observer who interacted with Oswald who was obviously perceptive.  He immediately recognized Oswald as a soviet provocateur.  He spent time with him and arranged for an associate to debrief Oswald.  This eliminates the first myth about Oswald.  He clearly was not a stupid man.

This means that his sojourn in surely led to his been properly trained in some level of spy craft.  This means he was trusted to meet with Cuban intelligence.  This is no failed spy at all.

The train of circumstantial evidence immediately suggests he was contracted to kill Kennedy and was in fact paid.  His actual preparation and execution was professional.

What is now missing is the rest of the story and why his escape plan derailed.  He surely had a well prepared escape in place and it possibly relied on American dupes who got cold feet and possibly got wise and saved themselves by tipping police to his location.  He may well have overreached and set up a parallel plot to provide cover for his real employer.  The dupes could even have been the ones who had him shot to protect themselves.  All this makes more sense than the official scenarios.

Lee Harvey Oswald was an effective provocateur at the least and was pursuing introduction to politicized groups such as the Cuban refugees in country and who knows who else.  He was promoting himself as a communist sympathizer in a time when no one did so.

Afterwards we were fed plenty of disinformation that hid the man’s intelligence and probable training and plenty else.

Did Castro Get Kennedy?

“Of all the people I interviewed in regarding the Kennedy assassination, Carlos Bringuier was the one I trusted most. I could see in his eyes he was always telling me the complete truth.” (Oriana Fallaci, L, Europeo, 1969.)

“That weasel walked into my store and started looking around,” recalls Carlos Bringuier about the afternoon of August 5, 1963. “But I could sense he wasn’t a shopper. Sure enough, after a few minutes of browsing he came up and extended his hand. “Good afternoon,” he said. “I’m Lee Harvey Oswald.”

In 1963 the CIA regarded the Directorio Revolucionario Estudiantil (DRE) “the most militant and deeply motivated of all the Cuban exile organizations seeking to oust Castro.” Carlos Bringuier was their representative in . It was DRE agents who infiltrated and brought out the first reports of Soviet missile installations–to the scoffs of everyone from Camelot’s CIA to the State Department’s wizards, to the White House’s Best and Brightest. It took two months for anyone to finally take them seriously. A U-2 flight then confirmed every last detail of what the DRE boys had been risking their lives for months to report.

“Oswald approached me because my name was so often linked to anti-Castro activities in the local () news,” recalls Bringuier. “He even jammed his hand in his pocket and pulled out a roll of bills, offering to contribute to the anti-Castro cause. I was suspicious and declined, but he kept blasting Castro and Communism in very colorful terms the whole time he was in the store. He returned the next day, snarled out a few more anti-Castroisms and dropped off his training manual for the anti-Castro fight, Guidebook for Marines.”

Two days later Bringuier was astounded to spot Oswald a few blocks away from his store distributing Fair Play for pamphlets. Carlos approached, accepted a pamphlet, ripped it to pieces and a scuffle ensued. The cops arrived, the scuffle made the news, and a few days later Bringuier and Oswald debated on radio and TV.

Dozens of books, movies, articles and TV specials depict these events. What they don’t depict is how, between their scuffle and debate, Carlos and a friend Carlos Quiroga turned the tables on Oswald. Posing as a Castro-sympathizer eager to join Oswald’s Fair Play for Committee, Quiroga (who had not been in the store or involved in the scuffle) visited Oswald at his home and they commiserated for hours. “You read everyplace that Oswald was dumb, a flake, a patsy, a set-up,” says Bringuier. “Nonsense. He was a smooth operator and spoke fluent Russian.”

Among the things that caught Quiroga’s eye during his visit was Oswald speaking Russian with his wife and daughter. “Its good practice,” explained Oswald. “I’m studying foreign languages at .” He was lying. Also keep in mind the date:  this was 3 months before the assassination. Oswald’s stint in was virtually unknown at the time.

On the very night of Nov. 22rd 1963, Carlos Bringuier went public on American radio and TV: “We don’t know yet if Lee Harvey Oswald is President Kennedy’s assassin. But if he is, then Fidel Castro’s hand is involved in this assassination. ”

Fidel Castro immediately called a press conference to denounce Carlos Bringuier by name and kick off the media disinformation campaign that finally peaked as high comedy with Oliver Stone’s JFK.

“For 15 years of my life at the top of the Soviet bloc intelligence community, I was involved in a world-wide disinformation effort aimed at diverting attention away from the KGB’s involvement with Lee Harvey Oswald. The Kennedy assassination conspiracy was born—and it never died” (Ion Pacepa, the highest ranking intelligence official ever to defect from the Soviet bloc.)

But Carlos Bringuier was on to the disinformation campaign from its very birthday.

Oliver Stone interviewed me for hours while researching for his movie JFK,” recalls Bringuier. “This was almost 30 years ago. Stone’s loony–left credentials weren’t yet blatant. I figured he was after the truth. So I went along, telling him everything.  Well, his movie comes out –and turns out I’m involved in the conspiracy to kill JFK!” Bringuier laughs. “For fifty years the media has either ignored or turned everything I’ve told them upside down,” says Bringuier. “Finally I got sick of it so when 60 Minutes asked me for an interview a couple years back, I told them: ‘Sure. I’ll do an interview—but this time it has to be live, no editing.’ That ended whatever relationship I had with CBS producers.”

“U.S leaders who plan on eliminating Cuban leaders should not think that they are themselves safe!” warned Castro on Sept 7,1963. “We are prepared to answer in kind.”

Many of those closest to the early evidence were convinced that Castro made good on his boast. “I’ll tell you something that will rock you,” Lyndon Johnson told Howard K. Smith in 1966. “Kennedy tried to get Castro — but Castro got Kennedy first.”

General and former Secretary of Defense Alexander Haig agreed with LBJ. Haig served as a military aide under both the Kennedy and Johnson administrations. “As I read the secret report I felt a sense of physical shock, a rising of the hair on the back of my neck,” he writes about an incident one month after the Kennedy assassination when a classified report crossed his desk. “I walked the report over to my superiors and watched their faces go ashen.” “From this moment, Al,” said his superiors, “You will forget you ever read this piece of paper, or that it ever existed.”

The classified intelligence report that so rattled Haig and caused so many faces to go ashen described how a few days before the Dallas assassination, Lee Harvey Oswald, accompanied by Castro intelligence agents, had been spotted in Havana, where he’d traveled from Mexico City.

For 34 years Markus Wolf was the chief of ’s foreign intelligence service, a branch of the STASI with many contacts and operations in Castro’s . It was the STASI rather than the KGB that undertook the training of Castro’s police and intelligence services. Wolf’s autobiography is titled “Man Without a Face” and subtitled “The Autobiography of Communism’s Greatest Spymaster.” Most intelligence experts agree that the subtitle fits. Wolf was once asked about the Kennedy assassination and quickly replied. “Don’t ask me —ask Fidel Castro.”