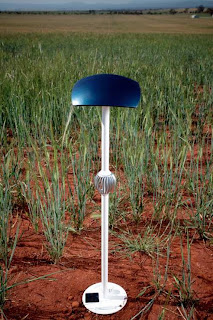 I have talked at some length in earlier posts about the idea of the Eden Machine which has the same purpose as this device.  The merit of this device is that he anchors the device in the ground itself at sufficient depth to lie below the warming top soil and to provide a natural cool zone to work against.  This is a really good idea that it may be possible to take serious advantage of.

I have posted before that the design should work around 100 liters of daily water production.  That happens to be enough to support a pretty healthy tree and its related shade.

It never occurred to me that using the earth for a cooling reservoir was a natural simplification.  Add in a prop to harvest wind energy and centripetal airflow separation and we may be able to draw cooler humid air into the cooling chamber.  With a bit of fuss we may even have it working well without wind at all.

The water itself can be dripped at night into the roots.

I deliberately declared the Eden Machine in the hopes of getting many to work up ideas.  This is good one.  I would love to be able to offer a large prize for the best solution.

Such inexpensive devices will easily double the available arable land on Earth. 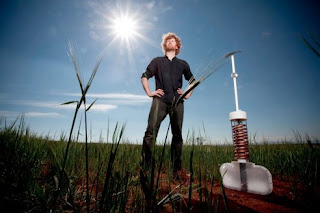 The winner of this year's James Dyson Award is one that focuses on the water crisis in . A continent faced with severe droughts, it is no wonder that Edward Linacre from of Technology in wanted to come up with a solution that will provide fresh water where there is no source on the ground.

A press release notes, "Edward studied the Namib beetle, an ingenious species which lives in one of the driest places on earth. With half an inch of rain per year, the beetle can only survive by consuming the dew it collects on the hydrophilic skin of its back in the early mornings. Airdrop borrows this concept, working on the principle that even the driest air contains water molecules which can be extracted by lowering the air’s temperature to the point of condensation. It pumps air through a network of underground pipes, to cool it to the point at which the water condenses. Delivering water directly to the roots of plants."
The use of biomimicry for water collection designs is popular among engineers -- and that includes studying the Namib beetle. But this is one of the more useful designs we've seen so far. And in areas where drought is causing the destruction of crops, it could be one we need sooner rather than later.

Edward explains the drive behind this design -- from the project's page: "The effects of climate change on are accelerating at an alarming rate. Last year the Darling area experienced the worst drought in a century, lasting 12 years and resulting in irreversible damage to ecosystems, widespread wildlife decline and catastrophic bushfire conditions. Agriculture in the region suffered record losses. An alarming figure of 1 rancher/farmer a week was taking their own life, as years of drought resulted in failed crops, mounting debt and decaying towns."
The research behind the design shows that "11.5 millilitres of water can be harvested from every cubic meter of air in the driest of deserts." However, there are of course limitations to how much can be collected by something like the Airdrop. Still, a $14,000 prize will go a long way to developing a version of Airdrop that can be useful to people living in these drought-stricken areas who need water to grow crops.

Currently, the design can be powered by sunlight, though future versions may also utilize wind power. 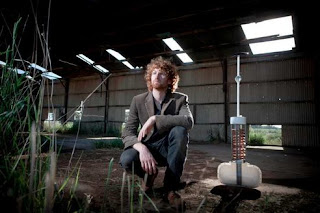