Diseased Hearts to Self Heal 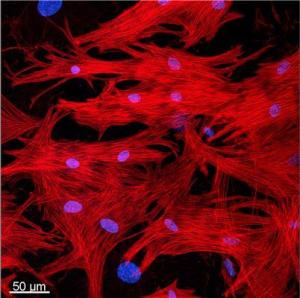 They have located the correct tool and must now learn how to safely use it in every patient.  The good news is that it is plausible that folks with a damaged heart can look forward to outright internal restoration sometime in the future and that basically provides hope for everyone dealing with an impacted heart.

This means of course a decline in the need for an outright heart transplant for a large number of patients.

It may also mean a recovery protocol for congestive heart failure.

Even as our options for outright replacement are seriously improving, it is good to see that a real healing mechanism may get there sooner.

I presume this protocol can be made to work elsewhere on less critical organs like scar damaged lungd.

Diseased Hearts to Heal Themselves in Future

ScienceDaily (Nov. 11, 2011) — Oncostatin M regulates the reversion of heart muscle cells into precursor cells and is vitally important for the self-healing powers of the heart.

Cellular reversion processes arise in diseases of the heart muscle, for example myocardial infarction and cardiomyopathy, which limit the fatal consequences for the organ. Scientists from the Max Planck Institute for Heart and Lung Research in Bad Nauheim and the Schüchtermann Klinik in Bad Rothenfelde have identified a protein which fulfils a central task in this reversion process by stimulating the regression of individual heart muscle cells into their precursor cells.  They now plan to improve the self-healing powers of the heart with the help of this protein.

In order to regenerate damaged heart muscle as caused by a heart attack, for example, the damaged muscle cells must be replaced by new ones. The number of cells to be replaced may be considerable, depending on the extent of the damage caused. Simpler vertebrates like the salamander adopt a strategy whereby surviving healthy heart muscle cells regress into an embryonic state. This process, which is known as dedifferentiation, produces cells which contain a series of stem cell markers and re-attain their cell division activity. Thus, new cells are produced which convert, in turn, into heart muscle cells. The cardiac function is then restored through the remodelling of the muscle tissue.

An optimised repair mechanism of this kind does not exist in humans. Although heart stem cells were discovered some time ago, exactly how and to what extent they play a role in cardiac repair is a matter of dispute. It has only been known for a few years that processes comparable to those found in the salamander even exist in mammals.

Thomas Braun's research group at the Max Planck Institute for Heart and Lung Research in Bad Nauheim has now discovered the molecule responsible for controlling this dedifferentiation of heart muscle cells in mammals. The scientists initially noticed the high concentration of oncostatin M in tissue samples from the hearts of patients suffering from myocardial infarction. It was already known that this protein is responsible for the dedifferentiation of different cell types, among other things. The researchers therefore treated cultivated heart muscle cells with oncostatin M in the laboratory and were then able to trace the regression of the cells live under the microscope: "Based on certain changes in the cells, we were able to see that almost all heart muscle cells had been dedifferentiated within six days of treatment with oncostatin M," explains Braun. "We were also able to demonstrate the presence of various stem cell markers in the cells. This should be understood as an indicator that these cells had been switched to a repair mode."

Using a mouse infarct model, the Max Planck researchers succeeded in demonstrating that oncostatin M actually does stimulate the repair of damaged heart muscle tissue as presumed. One of the two test groups had been modified genetically in advance to ensure that the oncostatin M could not have any effect in these animals. "The difference between the two groups was astonishing. Whereas in the group in which oncostatin M could take effect almost all animals were still alive after four weeks, 40 percent of the genetically modified mice had died from the effects of the infarction," says Braun. The reason for this was that oncostatin M ensured clearly quantifiable better cardiac function in the unmodified animals.

The scientists in Bad Nauheim would now like to find a way of using oncostatin M in treatment. The aim is to strengthen the self-healing powers of the damaged heart muscle and to enable the restoration of cardiac function for the first time. The downside, however, is that oncostatin M was also observed to be counterproductive and exacerbated the damage in an experiment on a chronically diseased heart. "We believe that oncostatin M has considerable potential for efficiently healing damaged heart muscle tissue. What we now need is to be able to pinpoint the precise window of application to prevent any possible negative effects," says Braun.

The above story is reprinted from materials provided byMax-Planck-Gesellschaft.

Note: Materials may be edited for content and length. For further information, please contact the source cited above.

Cellular regression in diseased heart tissue with the help of oncostatin M: the image shows heart muscles under the fluorescence microscope. The myofibrils are stained red, the cell nuclei blue.