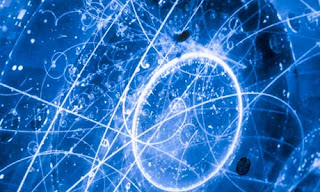 I think we can safely reject naïve objections to this result at this time.  Had such results any merit, the research team has now had time to qualify them and dismiss them.  Thus it is safe to say the following:

It is my claim that a neutrino passing through Earth accepts the local metric established by the mass of the Earth and otherwise accepts the metric imposed by the whole universe outside of the Earth when it is in fact measured.  Because all the other variables remain unchanged at the beginning and end of this measurement, the difference is expressed in terms of an increase in the speed of light.  See my earlier post on this.

This is actually a nice experiment that conforms to my theory of particle physics and the derivative Cloud Cosmology at present unpublished.  Do note the pertinent metric was published last year in AIP’s Physics Essays (June 2010).  In fact had it not been greater, or even insignificantly different, the application of my metric would have been in question or at least in limbo.
Faster-Than-Light Neutrinos: OPERA Confirms and Submits Results, But Unease Remains

New high-precision tests carried out by the OPERA collaboration in Italy broadly confirm its claim, made in September, to have detected neutrinos travelling at faster than the speed of light. The collaboration today submitted its results to a journal, but some members continue to insist that further checks are needed before the result can be considered sound.

OPERA (Oscillation Project with Emulsion-Tracking Apparatus) measures the properties of neutrinos that are sent through the Earth from the CERN particle physics laboratory in , , and arrive in its detector located under the Gran Sasso mountain in central . On 22 September, the collaboration reported in a paper on the arXiv preprint server that it had measured neutrinos arriving some 60 nanoseconds earlier than they would have if travelling at light speed. The researchers obtained that result by statistically comparing the temporal distribution of protons within the 10.5 microsecond pulses that produce the neutrinos at CERN with that of the neutrinos observed in its detector.

The new tests, completed 6 November, did away with the statistical analysis by splitting each pulse into bunches just 1- to 2-nanoseconds long, allowing each neutrino detected at Gran Sasso to be tied to a particular bunch produced at CERN. These tests were carried out over 10 days and provided 20 events. The researchers confirmed that the neutrinos arrived 60 nanoseconds early, with an uncertainty of about 10 nanoseconds, comparable to that of the initial result.

The collaboration has also checked its original statistical analysis, but today's decision to submit the results to a journal was not unanimous. "About four people" among the group of around 15 who did not sign the preprint have signed the journal submission, according to a source within the collaboration, while "four new people" have decided not to sign. That leaves the number of dissenters at about 15, compared with about 180 who did sign the journal submission.


A major concern among the dissenters is the fact that the "time window" within which neutrinos were detected by OPERA in the most recent run had a width of 50 nanoseconds, something that the leader of the superluminal analysis, Dario Autiero, only revealed once the tests had been carried out. It was initially assumed that this window was just 10 nanoseconds wide. This difference does not affect the final result itself, the source notes, but dissenters say it highlights poor experimental procedure. Some researchers are also unhappy that only a small fraction of the analysis, which was carried out by Autiero, has been independently checked by others within the collaboration. This leaves open the possibility, they say, that not all possible errors have been accounted for.


The question of whether or not OPERA really has seen faster-than-light neutrinos will probably be settled only once the results of other experiments are in. Meanwhile, within OPERA, "People are exhausted," says the source. "Everyone should be convinced that the result is real, and they are not."