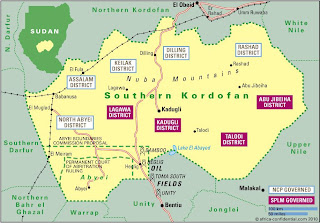 Government sponsored genocide has now been ongoing for decades and it appears that as one region is cleared out another is then targeted.  We can understand the attack on Christian tribesmen but the larger target is most likely more tribal and animist.

That the has been forced to split of as a separate nation at least provides a safe haven for the inevitable refugees or at least some of them.

One also wishes the would treat the present game of outright denial by the Sudanese with a completely denied carpet bombing of the Sudanese military assets.  It really is that outrageous and it is obvious that decades of negotiations have barely slowed the genocide at all.

Our problem is that we rally do not want to go in there at all.  was difficult and we had allies on the ground with NATO.  It still took intervention to end the horror.

The lesson of course is that it is going to take outright intervention on the ground to stop .  African nations are now becoming more effective and can act as creditable allies although south has not had time to fully organize a working military and their presence is necessary.

In the meantime the horror will continue for another decade.

is a kind of diabolical Groundhog Day. In the film by that name, Phil Connors (Bill Murray) re-lives the same day over and over again until he learns the lessons needed to change his life and save the lives of others. In today, people of the and are re-living the horrific nightmare from which they thought they had finally awakened after the signing of ’s 2005 Comprehensive Peace Agreement. But in this case, it is the government that has failed to learn the lessons needed to change conditions and save the lives of others.

Along with the citizens of what is now the new nation of the Republic of South Sudan, the people of the Nuba Mountains and Blue Nile State were for decades mercilessly persecuted and slaughtered by their own government. Starvation and enslavement were used as weapons of war along with ground combat and aerial bombardment. The hallmark of ’s multiple declarations of jihad against its own people is the deliberate targeting of civilians and particularly of Christians. In the case of , one Sudanese military commander,Taib Musba, was responsible for the killing of 15,000 Uduk Christians in the mid 1980’s. Some he killed personally by driving three-inch-long nails into the tops of their heads. Others were crushed by a 50 ton Soviet-made tank.

Deliberate targeting of civilians is also the hallmark of ’s current offensive against the Nuba Mountains and Blue Nile State. Since June 5, 2011, the Islamist regime’s forces, aided by militias, have been conducting an ethnically-based extermination campaign in the Nuba Mountains of while attempting to crush the resistance movement of the People’s Liberation Movement-North (SPLM/N). And in September they began attacking , as well.

In June Islamist militias first conducted a door to door search looking for Nuba with orders from ICC-indicted war criminal President Omer al-Bashir to “sweep out the trash,” and whenever they find a Nuba to “clean it up.” The horrific “cleaning” has been verified by the Satellite Sentinel Project. This invaluable effort, started by actor George Clooney, has provided evidence of mass graves believed to be of some 7000 people that were rounded up at the UN compound in the capital city of by Sudanese government collaborators and massacred. Since June, regular aerial bombardment has killed many and sent hundreds of thousands to seek refuge in caves and beyond in .

To add to the nightmare, began attacking Blue Nile State inSeptember. Unknown numbers of men, women, and children have been killed and tens of thousands have been displaced, even as the Sudan People’s Liberation Army-North (SPLA/N), the resistance movement’s forces, fight to protect the people and maintain territory. The people of and the Nuba now face starvation in government-orchestrated famine. has banned all humanitarian assistance from the regions. Now ’s rainy season has ended and is resuming land attacks, moving mechanized infantry columns into place, in addition to aerial bombardment.

On November 3,  announced the capture of Kurmuk, the capital of Southern Blue Nile State, by Government of (GOS) forces. These forces include both the regular Sudanese army and Mujahedeen and Janjaweed transferred from slaughtering civilians in Darfur civilians to slaughtering civilians in . According to Blue Nile Association North America, “before entering Kurmuk the GOS forces used aerial bombardment, heavy artillery and helicopter gunships targeting the city of and the surrounding areas, destroying water storage tanks, churches, schools and civilians’ homes.” Tens of thousands of indigenous people were displaced, injured, and killed. may also have employed chemical weapons. Many of the injured SPLA/N soldiers “had strange bleeding from their ears and noses.”

Reports on the ground confirmed that all of the villages and towns in the 100 or so miles between Damazin city and Kurmuk as far as the Ethiopian border were completely looted, burned and destroyed by the invading forces. The Blue Nile Association stated that ICC-indicted war criminal president Omer al-Bashir had declared following the secession of that there was “no room for any talk about diversity.” He announced that was now a “pure Arab Islamic State.” “It seems that after this campaign and the campaign in South Kordofan President Basher [sic] is following his words to eradicate and cleanse the indigenous people in Blue Nile and of South Kurdufan,” the Association declared.

Not content to bomb men, women, and children in their own home regions, Sudanese Russian-built Antonovs recently crossed international borders and dropped bombs in the new nation of where many people from the north had fled. On Thursday, November 10, Sudanese bombers attacked South Sudan’s ’s Yida refugee camp, run by the Christian aid organizationSamaritan’s Purse. And the day before, the Sudanese had bombed Upper Nile State, also in .

At least 20,000 people had sought refuge at Yida, just over the border from . The refugee camp was hit by four bombs, three of which detonated, causing extensive property damage. Thankfully, no persons were injured. The one bomb that did not detonate could have been the source of greatest tragedy. It landed wedged into the side of one of the huts used as a school building, filled with some 200 children. But the commissioner of , , reported 12 people killed and 20 wounded in the area. The aerial attack on was reported to have killed 7 people in the area of Guffa. Church sources there said that the bombing was “serious and deliberate.”

With the kind of nerve for which it has long been infamous, the Sudanese regimedenied the entire episode. “This information is completely false. We didn’t bomb any camps or any areas inside the borders of South Sudan,” Armed Forces spokesman Sawarmi Khaled Saad told the AFP news agency. “What is going on in belongs to the southerners. We don’t have any links to this,” he declared. The Sudanese Ambassador to the UN, Daffa-Alla Elhag Ali Osman, similarly denied the charges, saying that the reports were “fabrications” and “there was no aerial bombardment.”

Meanwhile, the response of the Obama administration has been more of the same moral equivalency that has enabled to continue on toward its final solution, an ethnically-cleansed Arab Islamist state, for years. On November 9, after the aerial attack on , the State Department issued astatement condemning “in the strongest possible terms the aerial bombardment by the Armed Forces that occurred near the international border between and .”

After saying that “indiscriminate aerial bombardment of civilian targets always is unacceptable and unjustified” the State Department states the obvious: “This attack only further emphasizes the need for an immediate halt to indiscriminate bombing of civilian areas by the Armed Forces…” The statement warns that this also further emphasizes the need for “resolution to the conflict through a resumption of political talks between the Government of and the People’s Liberation Movement-Northern Sector.” It concludes by urging “both sides to fully commit” to African Union talks “facilitated by Thabo Mbeki.”

Apart from the doubt that many Sudanese have expressed concerning the former president of ’s neutrality (since he himself owns a business in ), the idea proposed by the State Department that there can be a political solution to the conflict is absurd when the conflict is jihad. The oft-stated goal of ’s jihad is a pure Arab Islamist state. The majority of the Sudanese people do not want this Islamic utopia. They want freedom, democracy, and separation of church/mosque and state, and they have fought harder and sacrificed more for more years for it than any denizen of “Arab Spring.”

“We know very well the plans of the Khartoum regime, which is working on a strategy of demographic change and replacement of indigenous people with foreigners from Somalia and Niger,” said SPLM/N spokesman Arno Ngutulu in a November 11 press release. “We are more determined than ever to continue the struggle until the toppling of the regime and eliminate it from the roots completely,” the statement concluded. In this recurring nightmare in which those who want freedom and democracy in Sudan have to struggle against not only the Islamist regime in Khartoum, but must fight an uphill battle with the United Nations and even with the U.S. government, that “toppling” will not come easy.
Posted by arclein at 12:01 AM