Thorium Reactors to be Built in India and China 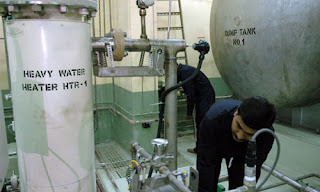 is launching a thorium reactor and at the same time has announced plans to build out a series of reactors using a liquid thorium salt system which sounds even more attractive.

Whatever the outcome, it is certain that we will soon have thorium based reactors in place.  This is extremely good news as these reactors are ideal for consuming other waste radioisotopes such as plutonium.  Thus even if the heat engine business is dominated by the Rossi Focardi reactor there will remain a market for thorium rectors to assist in the elimination of the huge remaining stockpiles of uranium and uranium derived waste products.

If for whatever reason we do not get a better energy source, thorium is certainly superior to what is available using uranium protocols and the transition to thorium will run to completion driven by the growing desire to eliminate the uranium fuel cycle.

Use of relatively low-carbon, low-radioactivity thorium instead of uranium may be breakthrough in energy generation

India has announced plans for a prototype nuclear power plant that uses an innovative "safer" fuel.

Officials are currently selecting a site for the reactor, which would be the first of its kind, using thorium for the bulk of its fuel instead of uranium – the fuel for conventional reactors. They plan to have the plant up and running by the end of the decade.

The development of workable and large-scale thorium reactors has for decades been a dream for nuclear engineers, while for environmentalists it has become a major hope as an alternative to fossil fuels. Proponents say the fuel has considerable advantages over uranium. Thorium is more abundant and exploiting it does not involve release of large quantities of carbon dioxide, making it less dangerous for the climate than fossil fuels like coal and oil.

In a rare interview, Ratan Kumar Sinha, the director of the Bhabha Atomic Research Centre (BARC) in Mumbai, told the Guardian that his team is finalising the site for construction of the new large-scale experimental reactor, while at the same time conducting "confirmatory tests" on the design.

"The basic physics and engineering of the thorium-fuelled Advanced Heavy Water Reactor (AHWR) are in place, and the design is ready," said Sinha.

Once the six-month search for a site is completed – probably next to an existing nuclear power plant – it will take another 18 months to obtain regulatory and environmental impact clearances before building work on the site can begin.

"Construction of the AHWR will begin after that, and it would take another six years for the reactor to become operational," Sinha added, meaning that if all goes to plan, the reactor could be operational by the end of the decade. The reactor is designed to generate 300MW of electricity – about a quarter of the output of a typical new nuclear plant in the west.

Sinha added that was in talks with other countries over the export of conventional nuclear plants. He said was looking for buyers for its 220MW and 540MW Pressurised Heavy Water Reactors (PHWRs). Kazakhastan and the are known to have expressed an interest, while one source said that negotiations are most advanced with , although Sinha refused to confirm this.

"Many countries with small power grids of up to 5,000 MW are looking for 300MW reactors," he said. "Our reactors are smaller, cheaper, and very price competitive."

Producing a workable thorium reactor would be a massive breakthrough in energy generation. Using thorium – a naturally occurring moderately radioactive element named after the Norse god of thunder – as a source of atomic power is not new technology. Promising early research was carried out in the in the 1950s and 60s and then abandoned in favour of using uranium.

The pro-thorium lobby maintains this was at least partly because national nuclear power programmes in the and elsewhere were developed with a military purpose in mind: namely access to a source of plutonium for nuclear weapons. Unlike uranium, thorium-fuelled reactors do not result in a proliferation of weapons-grade plutonium. Also, under certain circumstances, the waste from thorium reactors is less dangerous and remains radioactive for hundreds rather than thousands of years.

That is a considerable plus for governments now worried about how to deal with nuclear waste and concerned about the possibility of rogue governments or terrorists getting their hands on plutonium. Also, with the world's supply of uranium rapidly depleting, attention has refocused on thorium, which is three to four times more abundant and 200 times more energy dense..

"Given 's abundant supply of thorium it makes sense for her to develop thorium reactors," said Labour peer Baroness Worthington who is patron of the Weinberg Foundation, which promotes thorium-fuelled nuclear power.

She added: "However, many of the advantages of thorium fuel are best realised with totally new reactor designs such as the molten salt reactor developed Alvin Weinberg in the 60s. I hope will also commit to exploring this option."

has the world's largest thorium deposits and with a world hungry for low-carbon energy, it has its eyes on a potentially lucrative export market for the technology. For more than three decades, 's nuclear research programme had been subject to international sanctions since its controversial 1974 nuclear tests. But after losing its pariah status three years ago as a result of the Indo-US nuclear deal, is keen to export indigenous nuclear technology developed in research centres such as the BARC.

There are still restrictions though. One problem is the "trigger fuel" the reactor needs to initiate operation. In the original design, this is a small quantity of plutonium. Instead the new reactor's trigger will be low-enriched uranium (LEU) – which is permitted to import under the 2008 Indo-US deal.

"The AHWR will eventually have design flexibility, using as fuel either plutonium-thorium or LEU-thorium combinations," said Sinha. "The LEU-thorium version will make the AHWR very much marketable abroad, as it would generate very little plutonium ... making it suitable for countries with high proliferation resistance."

The LEU-thorium design is currently at pilot stage. For the first time last year, the BARC tested the thorium-plutonium combination at its critical facility in Mumbai, but is still some way from doing the same for the thorium-LEU combination.
Posted by arclein at 12:01 AM