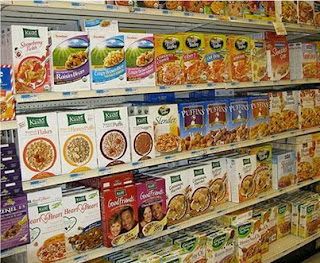 Everything we have learned about a healthy diet pretty well rules out processed breakfast cereals which merely give you a sugar hit which burns of inside of an hour.    Porridge is possibly the least damaging choice.  In fact treat packaged cereals as a pleasant dessert to have from time to time after the ingestion of a protein meal.  That is how I sneak them into my diet without breaking my rules.

My other favorite for breakfast is kippered herring and a side of Korean kimchee and perhaps a bowl of porridge with milk and molasses to make it a complete meal.  If you can source the kippers (a challenge at present) you will be eating my version of the Scandinavian diet also known as the Scottish diet.

It is outrageous that the twentieth century saw a massive increase in consumed sugar solely through the advent of processed foods.  This has been paralleled with a conforming rise in circulatory disease.  The industry of course does all to hide this fact when their customers would be better served by a mutual regulatory scheme that controlled the use of sugar at least.  The industry could set it up and we would never know.  You will be amazed at how fast our taste buds will reset.  If you do not believe me, try eating packaged oriental pastries.  They are simply not sweet enough to our present taste.

I hate to make blanket statements but it is surely true that the majority of our present chronic health problems would actually disappear if sugar simply became unavailable. Stevia could fill the need for sweetening all by itself which is why the sugar lobby worked long and hard to prevent its usage.  I do think though that it is going to take something just that draconian to shift our food regime properly.  I like honey and maple syrup better anyway and they are both too expensive to truly over indulge easily.

It’s Not Organic… But So What?

Kellogg’s and other manufacturers have replaced organic ingredients in cereals like kashi with “natural” ones… but even organic cereals are a health threat.

Have you heard what’s been happening? Organic advocates, groups and media outlets are up in arms because breakfast cereal producers like Kashi and Mother’s were caught switching from organic ingredients to “natural” ones.1

There are endless articles about how this or that cereal has almost no organic ingredients. There’s even a giant report from the Cornucopia Institute called Cereal Crimes.2 It describes how manufacturers are now deceiving you by lowering their organic content without telling you, but still charging high organic prices.

I’ll tell you why in a minute, but first, I’ll let you in on a little secret that’s not very well known: The entire reason cereal exists in the first place is because of the Kellogg brothers who believed eating meat was wrong.

A hundred and fifty years ago, Americans ate pork, beef, or chicken for breakfast. In the 19th century, Americans ate breakfasts heavy on the meat and natural fiber, light on grains. Heart disease was extremely rare.

The Kelloggs ran a sanitarium, and were vegetarians. They developed what we now call “granola” and eventually corn flakes to feed their patients instead of animal products. The patients started requesting it by mail after they left the sanitarium because they believed it was healthy. The Kelloggs started packaging it, and had a business on their hands.

To sell their products, the Kelloggs used shrewd advertising to convince you that cereal is good while meat and eggs are bad. Not because it’s true, but because it was in their commercial interests. The Kelloggs had a commercial and vegetarian agenda that deceived people into thinking their product was “healthy,” and traditional foods were not.

For decades now ads touting cereal as Mother Nature’s wholesome solution for obesity and heart disease have been very effective. Kellogg’s even has a “Mr. Breakfast” character to try and convince parents and children that cereal is the only breakfast food you need.

C.W. Post should know. He was a patient at the Kelloggs sanitarium. His health didn’t improve one bit while there, but he saw the business opportunity, and started his own sanitarium. And his own Post Cereal Company. You might recognize his version of granola. They’re the so-called health food called “grape nuts.”

But what the Cornucopia Institute and others should be talking about isn’t whether or not cereal is organic.

If they really wanted to be an advocate for you, they would admit that cereal is bad for you. It’s not healthy. It will make you fat. It will spike your insulin and put you on the road to diabetes.

The truth is, Mother Nature didn’t intend for you to eat breakfast out of a box. In fact, it would harm your health less for you to eat the cardboard box than what’s inside. At least you won’t digest the box.

Your ancestors only ate grains in an emergency. They thrived on foods like eggs, meat, and fish. This is what gave them power, strength, and vitality.

I remember staying at my grandparents’ place when I was a kid. I’d wake up to the smell of steak and eggs and race down the stairs to get my place at the table.

Your grandparents ate this way, too. It’s much better for you than what the media and food producers want you to believe.

Today, you’re bombarded by commercials for low-fat granola, Cheerios, and Special K. You are encouraged to believe you’re eating healthy products because they tell you it’s “high-fiber, whole oat, and whole grain wheat.”

And it has worked.

There is so much misinformation out there that most people believe cereals are “healthy” and natural. Few people think of cereal as being a threat to their health.

But no matter which one you choose, all those low-fat carbs throw your metabolism out of whack. And eventually, your health will suffer.

Among many other problems, breakfast cereals are high on the glycemic index (GI). A dose of high-glycemic carbs in the morning is the prescription for building excess body fat.

For instance, the GI rating of an average piece of chocolate cake is 38… a Snickers bar is about 55. Still not bad.

Compare that to the GI of Kellogg’s Corn Flakes… which registers a whopping 92.3 That means corn flakes break down into sugar in your bloodstream almost as fast pure glucose, which has a GI of 100!

Remember, high blood sugar triggers a wave of insulin. And insulin is the hormone that sends the message to build and store fat.

Even “healthy” cereals like Grape-Nuts have a GI of 80. That’s also very high.

Forget about the commercials you see on TV. Grains might be a fast fix when you’re rushing to get your day started, but cereal in the morning will make you fat.

If you want carbs, avoid the processed ones at all costs. Enjoy your carbs the way nature made them. Fresh and raw.

But please, don’t skip breakfast. It’s the most important meal of the day, and the one I enjoy the most. I try and change it up to keep it interesting, but meat or fish is always the centerpiece of my morning meal.

Here are three of my favorite breakfasts you might enjoy:

1.  Fried eggs with a side of steak: Look for cage-free eggs at the grocery store. They come from antibiotic-free chickens raised in a natural, healthy environment. Fry them in organic butter.

Make sure to buy grass-fed beef. Animal fat is good for you, as long as it’s from disease-free livestock that haven’t been injected with hormones or fed antibiotics. Stores like Whole Foods carry it, or see if your butcher can order it for you.

If you don’t like frying, take a few extra moments and scramble some eggs. Before you throw the eggs in, sauté some sliced tomatoes and mushrooms. Maybe some onion, too.

2.  Cheese omelet with salmon: Fish is a fantastic breakfast food. The Japanese eat fish and vegetables first thing every morning. They have for over 1,500 years, and have had virtually no heart disease or diabetes.

I like to add a leafy green vegetable to my omelets, usually spinach. For the cheese, look for 100% organic from grass-fed cows, if you can. You get none of the hormones and antibiotics and far more nutrients. Buy wild salmon instead of farm-raised. It has no dyes, less toxins, and higher levels of omega-3.

3.  Ackee with saltfish: This is ’s national meal and the all-time best meal as far as I’m concerned. Ackee is a fruit, and it’s a little bit tricky to prepare. The saltfish is a kind of cod. I also like to eat it with callaloo (amaranth).

Here’s a recipe that serves four:

Instructions:
Cover the saltfish in cold water. Let soak overnight (minimum 8 hours) changing the water several times (this removes most of the salt).

Bring a pan of cold water to the boil and gently simmer the fish for 20 minutes (until the fish is tender).

Chop the onion, sweet pepper, Scotch bonnet pepper and tomato while waiting for the water to boil.

Wash the callaloo in a pot of water and drain thoroughly.

Remove the fish from water and allow to cool. Remove all bones and skin then flake the flesh of the fish.

Melt the butter in a frying pan and add the onion, black pepper, sweet pepper, Scotch bonnet and thyme. Fry for about 5 minutes.

Add the callaloo and half a cup of water, cover and steam for 15 minutes.

Add the tomatoes and flaked fish and steam for another 10 minutes.

When I leave the house, I’m full of energy. And I’ve never missed a day of work in my life.

If you really need a carb fix, save it for the occasional desert. Don’t make it a part of your breakfast. The addiction may be hard to break, but you’ll be a lot happier – and more productive.

Anonymous said...
This comment has been removed by a blog administrator.
November 7, 2011 at 2:04 PM