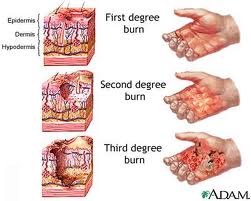 I grabbed this piece from a newsletter post and it is well worth reading.  We learn that a correct second step in dealing with burns is that after the wound has been cooled, it is highly therapeutic to apply layers of egg white.  It forms a moist gel and allows the cells to breathe and absorb proteins and vitamins.  A simple gel coat will also help because it keeps the damaged skin moist.  However such gels are never available, but egg whites certainly are.

Damaged skin dries and dies pretty quickly, so rapid application certainly matters and the more this is well known the better.  Dying cells need moisture and oxygen.  An egg white gel creates just that for maximum cell survival as is obvious from these reports.

Keep this in your bag of tricks along with immediate and protracted CPR for heart attack victims.

Additional note:  I have addressed burn gels in the past that are able to contain biologically available oxygen.  The science is presently misunderstood.  However upon reflection it is clear that the albumen must draw oxygen from the atmosphere through the shell membrane and this also must be in the form of bio available oxygen.  Thus albumen is a naturally occurring form of burn gel that is also able to supply emergency oxygen to a wound surface.  This is good news for treatment of open wounds that need healing support.

A young man sprinkling his lawn and bushes with pesticides wanted to check the contents of the barrel to see how much pesticide remained in it.  He raised the cover and lit his lighter; the vapors inflamed and engulfed him.  He jumped from his truck, screaming.  His neighbor came out of her house with a dozen eggs, yelling: "bring me some eggs!"  She broke them, separating the whites from the yolks.  The neighbor woman helped her to apply the whites on the young man's face.  When the ambulance arrived and when the EMTs saw the young man, they asked who had done this.  Everyone pointed to the lady in charge.  They congratulated her and said: "You have saved his face."  By the end of the summer, the young man brought the lady a bouquet of roses to thank her.  His face was like a baby's skin.

Keep in mind this treatment of burns which is included in teaching beginner fireman this method.  First aid consists to spraying cold water on the affected area until the heat is reduced and stops burning the layers of skin.  Then, spread egg whites on the affected are.

One woman burned a large part of her hand with boiling water.  In spite of the pain, she ran cold faucet water on her hand, separated 2 egg white from the yolks, beat them slightly and dipped her hand in the solution.  The whites then dried and formed a protective layer.

She later learned that the egg white is a natural collagen and continued during at least one hour to apply layer upon layer of beaten egg white.  By afternoon she no longer felt any pain and the next day there was hardly a trace of the burn.  10 days later, no trace was left at all and her skin had regained its normal color.  The burned area was totally regenerated thanks to the collagen in the egg whites, a placenta full of vitamins.

I did read the snopes item and am not particularly impressed. First problem is that the explanations for either is at best speculative.

On that basis alone, applying a froth of egg whites to open wounds or cooled burns appears to be a pretty good idea.

When and if i resume work on bioxy gel, i will also run an additional burn test on my arm with water, the gel and also egg white to compare behavior. The gel by itself cut healing time in half. I suspect that the egg white will be just as good.

By the way, the egg white will also keep the wound damp and protected which is a great improvement over just water. There are plenty of good reasons to apply this protocol when confronted with the problem.

I heard of a friend who got a bad burn and he pour white sugar over it and wrapped it up in saran wrap before going to the hospital. Didn't seem to hurt him any. Said it was an old army trick.

the scariest thing about using egg white is the possibility of infecting the area with salmonella. There are other barriers (which is really what the egg white does) that are just as effective without this possible threat.