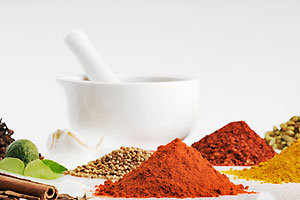 For years we have been led to believe that spicy foods caused difficulties with the sensitive digestive tract as part of the medical lore best described as old wife’s tales.  The reality observed here is that the general run of such spices generally ameliorate the proper digestion of oily foods in particular leading to a superior profile in terms of coronary disease.  The improvement indicated is in fact substantial.

I no longer feel any need whatsoever to ever apologize for my life long excessive usage of all these spices.  Their heavy use in the preparation of curried meats is now much better understood.  It naturally counters any negative excesses.

If there is a surprise it is to see many spices that I see as fairly bland right there with the rest, so it is really not entirely about flavor.

Fill out the spice rack with fresh spices and use constantly.  It is really good for you.

Spice things up: Protect your heart with cinnamon and paprika

Sprinkle a little paprika on your eggs. Add cinnamon to that coffee. Order the curry. A new study published in the Journal of Nutrition has found that a diet rich in spices like turmeric, cinnamon and paprika can counter the damaging effects of fatty foods.


“Normally, when you eat a high-fat meal, you end up with high levels of triglycerides, a type of fat, in your blood. If this happens too frequently, or if triglyceride levels are raised too much, your risk of heart disease is increased,” study leader Professor Sheila West told Science Daily.


“We found that adding spices to a high-fat meal reduced triglyceride response by about 30 per cent, compared to a similar meal with no spices added.”


The research team prepared two test meals for six men ages 30 to 65, all overweight but otherwise healthy. The meals were identical, save for the addition of two tablespoons of culinary spices — an antioxidant dose equivalent to 1.4 ounces of dark chocolate — to one of the meals.


“We selected these spices because they had potent antioxidant activity previously under controlled conditions in the lab.”


After each meal — chicken curry, Italian herb bread, and a cinnamon biscuit — the test participants had blood drawn every 30 minutes for three hours. The results: antioxidant activity was up 30 per cent and insulin response decreased by 20 per cent after the spice-infused meal. (High insulin levels can be toxic over time, contributing to heart disease, arthritis and diabetes.)


Skulas-Ray says that none of the participants experienced any gastrointestinal discomfort from the spicy foods. In the future, West and her team will investigate if smaller doses of antioxidant spices can produce similar results.
Posted by arclein at 12:01 AM