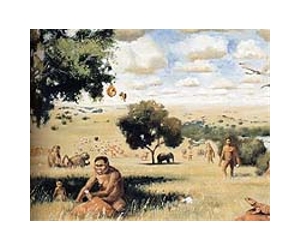 Modern humanity is a recent development that arose perhaps 250,000 years ago around the coasts of southern .  I suspect we will find a convenient coastal keyhole to push him through from his grassland lifeway involving small hunting bands into an extended village clan system utterly necessary for modernity to arise at all.

Before all that, open hunting grounds needed fleet hunters working cooperatively.  Woodlands create a different style favoring individual prowess.  A flung stone from cover is as much as you need.

Mankind and his predecessors were never obviously adapted for woodlands as that requires lone hunting and inter band conflict as the Amazon has long shown.

I suspect that the open plains hunters like the lion have never had it so good since mankind generally lost interest with the advent of agriculture..

Humans evolved in grassland, not forests?

A study questions the theory that early humans evolved in closed woodland in and then moved to open savannah as they become bipedal.

Researchers at the of say an analysis of fossil soils in regions associated with early hominins in eastern 6 million years ago suggests our early ancestors evolved in a savannah-like environment with less than 40 per cent tree cover, rather than in more closed woodland.

Fossil soils can yield information about the vegetation that once grew in the regions and can provide clues to the type of ecosystem that existed in different time periods, a university release said Wednesday.

"We've been able to quantify how much shade was available in the geological past," said geochemist Thure Cerling, one author of a study appearing in the journal Nature. "And it shows there have been open habitats for all of the last 6 million years in the environments in eastern where some of the most significant early human fossils were found.

"Wherever we find human ancestors, we find evidence for open habitats similar to savannas -- much more open and savanna-like than forested," he said.