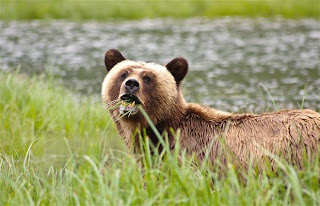 The great bear rainforest is a treasure of profoundly old true wilderness unlike most places on this planet.  The hand of man has been extremely light.  For a century, some forest was removed and will now fully recover.  Man never was able to establish a successful lifeway in these forests that could possibly support a community.  The salmon culture was always on the forest’s edge rather than truly a part of the forest.

The simple effort to merely walk through the forest itself will quickly cause one to understand why.  Deadfalls over three meters thick soon cure one of attempting a compass march as you are forced to adopt natural ridgelines and the like.  Bushwhacking through the boreal forest is a hard day’s work and vastly more difficult here.  Cutting roads in the tumbled mountain terrain is just as difficult which is why they are so few.

It all can be done for the big timber, but that alone bespeaks the greater costs involved.

Humanity has not recycled this forest as it has done to both the and the Amazon and everywhere in between far beyond our imaginings.  As this travel log expresses, it is well worth the effort to cruise its shores.

BY MARK SISSONS, FOR THE HERALD

A mother grizzly grazes on the shoreline sedges of Khutze Inlet midway along the Great Bear Rainforest coast.

As dusk descends, an explosion of violence shatters the tranquility of the world's largest remaining tract of unspoiled ancient temperate rainforest. The chase is on.

A frantic deer bolts from the woods only metres from where our zodiac floats on the glassy calm estuary waters. On its heels races a sea wolf in a blur of black fur and fangs. Nostrils flaring, tongues flapping, predator and prey swim straight toward us, then veer off across the inlet.

Unable to overtake its swifter dinner on the hoof, the exhausted wolf abandons the chase and retreats to the rocky shore. There, it paces back and forth, eyeing us in frustration as hungry members of its pack howl for updates from deep within B.C.'s Great Bear Rainforest.

Named for the bears that inhabit its thickly forested islands and inlets - including grizzlies, American black bears and Spirit bears (a black bear born with a recessive gene that produces cream coloured fur) - this vast, mostly uninhabited archipelago twice the size of the Serengeti stretches from the northern tip of Vancouver Island to the border. It is also home to countless species of birds, marine life and other mammals, including coastal wolves that can hunt salmon from streams like bears and swim like sea otters.

"The Great Bear Rainforest is so remote that it's one of the few remaining inhabitable parts of the world that is completely black at night on satellite images," says Kevin Smith, owner and captain of the Maple Leaf, B.C.'s oldest operational tall ship. I'm aboard his 92-foot, two-masted, mahogany-lined schooner for a unique weeklong midsummer nautical natural history tour.

It wasn't until the 1990s that environmentalists coined the name Great Bear Rainforest and began drawing public attention to the devastating logging practises that companies were inflicting on what they then called the Mid-Coast Timber Supply Area. In 2006, an agreement between the B.C. government and a coalition of conservationists, loggers, hunters, and First Nations established a 400kilometre-long protected coastal area.

Today, only a handful of tourist-toting ships like the Maple Leaf operate along the coast of this magnificently rugged, rain-swept wilderness, where snowcapped peaks loom over precipitous, forested fjords that plunge into deep dark channel waters.

And what a ship the Maple Leaf is. Originally built in 1904 as a luxury racing yacht by timber titan Alexander Maclaren, she began life as the queen of the West Coast sailing scene. Then resurfaced as the most legendary halibut longliner of her time, fishing the brutal for over 40 years.

Restored to her original glory in 1986, this maritime marvel has cruised the coast from Bella Bella to Alaska ever since, introducing generations of eco-travellers to one of the world's last remaining truly wild places. Up here, mist often lingers in the tangy salt air like a primordial stage curtain, occasionally parted by rainbows to reveal a world of untouched natural beauty that Smith lovingly calls "a blueprint for how the world can repair itself."

During our voyage from Bella Bella to , some days are blustery, and others gloriously sunny. But we are thankfully spared much of the pelting rain and gale force winds that give this tempestuous stretch of the North Pacific such a stormy reputation.

Each day brings fresh adventures. We take frequent shore excursions, marching through boggy estuaries under the tutelage of the ship's naturalist, Briony Penn, searching for indigenous plants with names like queen's cup and dwarf dogwood, paintbrush and devil's club. There are soaks in hidden natural , forays in search of ancient petroglyphs, fishing off the Maple Leaf's stern, and sailing when weather permits. Most popular are evenings on deck spent feasting on freshly caught giant Dungeness crabs and jumbo prawns, washed down with fine B.C. and international wines.

One brisk morning we stretch our sea legs following fresh wolf tracks along a deserted island's sandy white beach and hike through old growth forest, where we're careful to leave minimal traces of our passing. Another afternoon, we bless the ship at a thundering waterfall.

This involves Captain Smith steering the Maple Leaf's bowsprit right to the spray-soaked edge of one of the countless waterfalls lining the route. Just close enough, it turns out, for first mate Greg Shea to fill an outstretched tumbler with arguably the purest H2O on Earth.

Along the route we encounter few other traces of humanity until we pay a visit to Klemtu, an isolated Kitasoo and XaisXais First Nations village of 400 that's only accessible by boat or plane.

Adorned with the clan emblems of the eagle, wolf, killer whale and raven, Klemtu's mammoth red cedar "Bighouse" hosts important cultural events - the naming of children, traditional potlatches and ceremonies to honour the deceased - that help to preserve Native culture all along this coastline.

Botany and cultural excursions aside, the most magnetic lure for most of the Maple Leaf's eight passengers is catching glimpses of whales, wolves, dolphins and, of course, bears. Since the elusive Spirit bear - estimated to now only number between 100 and 400 - rarely emerges from deep within the forests of Princess Royal and Gribble Islands until fall salmon spawning season, we pin our hopes on grizzly sightings, although Smith encourages us to lay our species checklists aside and simply "put ourselves in the path of the magic."

Turns out, the magic is all around us as we explore some of the same secluded bays, marshy inlets and swift flowing channels that Captain George Vancouver and other early European explorers once charted, and that First Nations peoples have called home for thousands of years.

Magic in the exuberance of white sided river dolphins and Dall's porpoises as they race alongside our ship, darting in and out of the water like aquatic bullet trains. In the friendly flicks of humpback tails, the slapstick routines of sea otters, and the precision-guided dive-bombing runs of eagles and sandhill cranes. And most powerfully, during our first close encounter with grizzlies in a waterfall-draped cove called Khutze Inlet.

Engine cut, our zodiac silently glides toward the inlet's shore, where we spot a 400-pound grizzly and her fluffy cub grazing on shoreline sedges and giant-leafed skunk cabbage. Everyone tenses with excitement, but not fear, because we're in good hands. With a decade of experience as a B.C. park ranger, Smith knows grizzlies and what safety precautions to take. We'll get respectfully close, but immediately retreat at the first hint of disturbance. Both bears seem blissfully undisturbed by our presence, and let us drift closer. That's for two reasons, explains skipper Smith.

"With us nearby she knows that the male grizzlies will keep their distance because they are especially uncomfortable around humans," Smith says, pointing out that males may try to kill young cubs that are not their genetic offspring. "Mama bear is also relaxed because she knows that we're not here to shoot her," he adds.

Bear shootings have dropped dramatically since 2005, when the team of conservationists and scientists at Raincoast Conservation Foundation purchased the commercial hunting licence for a vast area here three times the size of , effectively blocking access to trophy hunters. This innovative approach has helped protect bears and other trophy hunting targets like coastal wolves - already threatened by loss of habitat and a declining salmon supply - from the crosshairs of high-powered rifles.

As our ursine neighbours munch their way toward the water's edge, they take turns rearing up on hind legs to sniff for danger and locate each other in the tall sedge. Then, as suddenly as the deer and wolf had plunged into the water, so do the bears. Startled by something (a nearby male?), they paddle past us like furry torpedoes, noses just clearing the water. Seconds later, they clamber onto the safety of the far shore.

Then vanish into the dark woods.

No lingering like the frustrated sea wolf for this pair. Although the cub can't resist glancing back at these colourful and curious creatures that have respectfully and peacefully entered the lair of the great bears.

- About Maple Leaf Adventure: Voted one of National Geographic Traveler's 2011 Tours of a Lifetime, Maple Leaf Adventures offers several small group, multi-day sailing cruises into the Great Bear Rainforest between April and October, as well as tours to Haida Gwaii, the Gulf Islands, Vancouver Island and Alaska's Inside Passage. For more information, visit mapleleafadventures.com or call 1-888-599-5323

- Getting there: The Great Bear Rainforest trips start in Bella Bella and end in , both of which are accessible by regular, daily commercial flights.

Maple Leaf offers complete travel planning assistance and arranges for taxi or shuttle services to and from airports.

- Staying there: has a range of hotels and motels, including the Crest Hotel, which offers panoramic waterfront views. In Bella Bella, no accommodation is necessary because guests of Maple Leaf Adventures arrive and depart for the Great Bear Rainforest on the same day.

- Things to do: In , explore the historic area, which is lined with interesting cafés and shops. From there, it is a short walk to the Museum of Northern B.C., which features traditional northwest coast architecture and exhibits that explore the fascinating history of the area's First Nations. Also worth a visit is the , which displays a rebuilt 1925 R.E.O. Speedwagon fire engine. is also a world famous sport fishing destination.

- Conservation: For more information about the Raincoast Conservation Foundation's efforts to protect the lands, waters and wildlife of coastal , visit www.raincoast.org.