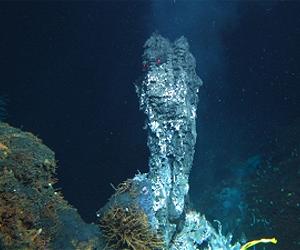 The surprise here is that the biome of the deep sea smokers is also able to use hydrogen which is commonly produced by the smokers.  I do not know if any of this will translate into improved hydrogen systems on land, but we now see nature doing it rather well.

Instead of oxygen, we have a chemistry based on hydrogen, methane and hydrogen sulphide.   It certainly makes the production of life on an oxygen free world rather plausible.  Take a hot rock like Venus and just add water.

The real point is that we now have the unimaginable in a life form that is fueled by hydrogen.  I wonder if it exists on Jupiter?

Hydrogen highway in the deep sea

When hydrothermal vents were first discovered more than 30 years ago, researchers were astounded to find that they were inhabited by lush communities of animals such as worms, mollusks and crustaceans, most of which were completely unknown to science.

The search for new energy sources to power mankind's increasing needs is currently a topic of immense interest. Hydrogen-powered fuel cells are considered one of the most promising clean energy alternatives. While intensive research efforts have gone into developing ways to harness hydrogen energy to fuel our everyday lives, a natural example of a living hydrogen-powered 'fuel cell' has gone unnoticed.

During a recent expedition to hydrothermal vents in the deep sea, researchers from the MaxPlanck Institute of Marine Microbiology and the Cluster of Excellence MARUM discovered mussels that have their own on-board 'fuel cells', in the form of symbiotic bacteria that use hydrogen as an energy source.

Their results, which appear in the current issue of Nature, suggest that the ability to use hydrogen as a source of energy is widespread in hydrothermal vent symbioses.

Deep-sea hydrothermal vents are formed at mid-ocean spreading centers where tectonic plates drift apart and new oceanic crust is created by magma rising from deep within the Earth.

When seawater interacts with hot rock and rising magma, it becomes superheated, dissolving minerals out of the Earth's crust. At hydrothermal vents, this superheated energy-laden seawater gushes back out into the ocean at temperatures of up to 400 degrees Celsius, forming black smoker chimneys where it comes into contact with cold deep-sea water.

These hot fluids deliver inorganic compounds such as hydrogen sulfide, ammonium, methane, iron and hydrogen to the oceans. The organisms living at hydrothermal vents oxidize these inorganic compounds to gain the energy needed to create organic matter from carbon dioxide.

Unlike on land, where sunlight provides the energy for photosynthesis, in the dark depths of the sea, inorganic chemicals provide energy for life in a process called chemosynthesis.

When hydrothermal vents were first discovered more than 30 years ago, researchers were astounded to find that they were inhabited by lush communities of animals such as worms, mollusks and crustaceans, most of which were completely unknown to science.

The first to investigate these animals quickly realized that the key to their survival was their symbiotic association with chemosynthetic microbes, which are the on-board power plants for hydrothermal vent animals.

"We have now discovered a third energy source" says Nicole Dubilier from the Max Planck Institute of Marine Microbiology in , who led the team responsible for this discovery.

The discovery began at the Logatchev hydrothermal vent field, at 3000 m depth on the Mid-Atlantic Ridge, an undersea mountain range halfway between the Caribbean and the . The highest hydrogen concentrations ever measured at hydrothermal vents were recorded during a series of research expeditions to Logatchev.

In the gills of the deep-sea mussel Bathymodiolus puteoserpentis, one of the most abundant animals at Logatchev, the researchers discovered a sulfur-oxidizing symbiont that can also use hydrogen as an energy source.

To track down these hydrogen-powered on-board 'fuel cells' in the deep-sea mussels, the researchers deployed two deep-sea submersibles, MARUM-QUEST from MARUM at the University of Bremen, and KIEL 6000 from IFM-GEOMAR in Kiel. With the help of these remotely-driven submersibles, they sampled mussels from sites kilometers below the sea surface.

Their ship-board experiments with live samples showed that the mussels consumed hydrogen. Once the samples were back in the laboratory on land, they were able to identify the mussel symbiont hydrogenase, the key enzyme for hydrogen oxidation, using molecular techniques.

The mussel beds at Logatchev form a teeming expanse that covers hundreds of square meteres and contains an estimated half a million mussels. "Our experiments show that this mussel population could consume up to 5000 liters of hydrogen per hour" according to Frank Zielinski, a former doctoral student in Nicole Dubilier's Group in Bremen, who now works as a post-doctoral researcher at the Helmholtz Centre for Environmental Research in Leipzig.

The deep-sea mussel symbionts therefore play a substantial role as the primary producers responsible for transforming geofuels to biomass in these habitats.

"The hydrothermal vents along the mid-ocean ridges that emit large amounts of hydrogen can therefore be likened to a hydrogen highway with fuelling stations for symbiotic primary production" says Jillian Petersen.

Even the symbionts of other hydrothermal vent animals such as the giant tubeworm Riftia pachyptila and the shrimp Rimicaris exoculata have the key gene for hydrogen oxidation, but remarkably, this had not been previously recognized.

"The ability to use hydrogen as an energy source seems to be widespread in these symbioses, even at hydrothermal vent sites with low amounts of hydrogen" says Nicole Dubilier.