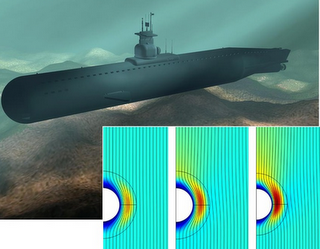 Sounds like a neat idea but reads unconvincingly.  I simply do not think this has a snowballs chance.

All I can think of is the drag created by such an idea.

Try and see if you can do better on this one.

In the computer simulation, a slow-moving cloaked sphere leaves no wake at all as it moves downward (inset, left), while the cloak still reduces the turbulence behind the sphere at faster speeds (inset, middle and right).


Physics World - a pair of physicists in the US have proposed a new type of material that lets water flow around an object as if it were not there at all. The design, which has yet to be built, could boost the energy efficiency of ships and submarines – and even prevent them from being detected. "

The latest design, put forward by Urzhumov and Smith in a paper due to be published in Physical Review Letters, could be called a water cloak, or more accurately a "fluid-flow cloak". It is based on the same theory that gave us previous cloaks, namely transformation optics. In the same way that the equations of general relativity show how gravity can warp space–time, so the equations of transformation optics can show how materials with unusual properties can warp the path of light – or indeed other waves, such as sound or water.

Arxiv - Fluid flow control with transformation media (4 pages)
Even if the metamaterial was able steer water around the vessel, there is a bigger problem: the more the water is steered, the more it will slow down. It is this change in velocity that is responsible for the frothy disturbance at a boat's wake. Therefore, suggest the researchers, the metamaterial would need to actively pump water to counteract the loss of speed. Since this pumping would have to be done throughout the metamaterial, the pumps would have to be tiny.


Urzhumov has a couple of ideas in mind. One is a piezoelectric pump, which consists of a small crystal that bends when a voltage is applied across it. Another is an electro-osmotic pump, in which a voltage across a membrane creates a pressure difference, forcing water through. "Electro-osmotic micro-pumps have a much lower flow rate, so they may [only] be used to build a proof-of-principle, scaled-down, slow-moving prototype," Urzhumov says. "Piezoelectric micro-pumps are the most likely candidates."


If Urzhumov and Smith's fluid-flow cloak were built, the researchers predict that one advantage would be efficiency. As a vessel moves, it drags nearby water with it, displacing more mass than it strictly has to. On the other hand, if the vessel were propelled only by the active metamaterial, then it would displace only the minimum water necessary.

Another advantage is silence: the turbulent wake of a vessel is where a lot of its acoustic noise is generated. By killing the wake, the metamaterial should make a vessel quieter. "Acoustic noise is definitely used by defence [agencies] for detection purposes," says Urzhumov.


Sebastien Guenneau, a physicist at Liverpool University who helped develop the water-wave cloak in 2008, says the fluid-flow cloak could have "tremendous potential applications in aeronautics", reducing the disturbed flow around boats, submarines and even aircraft. "There are obvious applications in civil engineering, but I guess the military would be interested too," he adds.

The proposed cloak would be a mesh of wires or blades, mounted on the surface of the object moving through water. For their model, the researchers chose a sphere, one of the simplest shapes to simulate. The simulated mesh was layered in 10 concentric shells around the sphere, guiding 10 streams of water. The water nearest the sphere needs the most deflection, so these wires or blades would be thickest. The thinner blades on the outside, however, would hardly change the path of the water, giving it a gentle entrance and exit. Micropumps would control the speed of the water in each layer, ensuring that each stream moved near the same speed as its neighbors. This gradual change from the near stillness of the outer layer to the speed of the sphere in the inner layer would prevent the water from dragging on the sphere or itself.


Urzhumov estimates that the cloak on a 10-centimeter-wide sphere could be anywhere from 1 centimeter to 10 centimeters thick. "Generally, thicker cloaks are easier to fabricate, but they also weigh more, so it's a tradeoff that engineers will decide on," he says.

At the moment, Urzhumov is setting his sights a bit lower. In the model described in an upcoming issue of Physical Review Letters, the computer simulation studied a fully submerged, bullet-sized vessel that travels at crawling speed, just a few millimeters per second. Yet even this has applications as the military explores the possibilities of automaton spies that look like birds, insects, and fish. Urzhumov proposes that a cloaked robo-minnow could stealthily investigate an enemy submarine, moving slowly but requiring little energy. As for when the first cloaks could hit the water, he speculates that it will take at least 5 years of basic research and development to get a working prototype.


However, he and Smith suggest that a different sort of cloak, made specifically to reduce the drag rather than the entire wake, might be easier to make and could be scaled up to fuel-efficient dream boats.
We introduce a new concept for the manipulation of fluid flow around three-dimensional bodies. Inspired by transformation optics, the concept is based on a mathematical idea of coordinate trans-formations, and physically implemented with anisotropic porous media permeable to the flow of fluids. In two di erent situations | for an impermeable object situated either in a free-flowing fluid or in a fluid-fi lled porous medium | we show that the object can be coated with a properly chosen inhomogeneous, anisotropic permeable medium, such as to preserve the streamlines of flow and the pressure distribution that would have existed in the absence of the object. The proposed fluid flow cloak completely eliminates any disturbance of the flow by the object, including the downstream wake. Consequently, the structure helps prevent the onset of turbulence by keeping the flow laminar even above the typical critical Reynolds number for the object of the same shape and size. The cloak also cancels the viscous drag force. This concept paves the way to energy-efficient, wake-free propulsion systems, which control and prevent wake formation through a smart spatial distribution of propulsion forces.