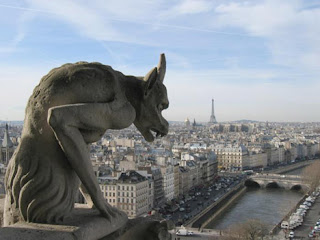 This is another pair of reports on the Chupacabra phenomena.  Both are by informed observers who know what to look for and what to expect when a farm animal dies suddenly.  The second report has a couple of broken gate chains which may totally unrelate.  I also find the specific mutilations hard to link to the eating behavior of a wild animal, but that is often true with other cattle mutilation cases.  Besides recall that the Tasmanian Devil is famous for eating everything including hair.  Perhaps this is not out of line for a transitional flying carnivore that is still close to reptilian ancestors.

A better name for the apparent creature is gargoyle now we have it confirmed again in .

Take away all the speculation and we have a flying creature able to soar hundreds of miles in a night from its hidden high elevation den that is a nocturnal hunter of large animals.  Its main food is to drain the blood from a large herbivore.  It sometimes finishes off with eating part of the prey, but not too much as it still needs to fly.  Soft parts are an obvious target, but bone and other tissue are not immune.

A blood-sucking creature is preying upon goats near . As rational explanations run thin on the ground, the specter of the so-called chupacabra raises its demon head.


Horrified farmers and smallholders are confronted by the drained corpses of their livestock in the morning, bloodless and bearing puncture marks to the neck but otherwise largely in tact.


But local cops are reluctant to record apparent vampire attacks, as they await official recertification, leaving the locals up in arms.

“If this creature is not stopped it could make its way to ! Only our police force are doing jack-diddly about it,” complaining locals told Komsomolskaya Pravda. “They say that there is no Chupacabra. Come if you will journalists, have a look at what is happening to us.”


Death in the night


“It all happened on the night of June 10,” she told KP. “I was sleeping, my daughter was sitting at the computer looking at the internet. She says that about 2.00 am she heard a sound in the yard. Some whining.


“The dog which guards the farm screamed for 15 minutes and then quietened down. The dog’s behavior drew the attention of my daughter Natalie, but she didn’t think it was important. She thought that if a stranger had come to the house then the dog would bark. And here it was more like whining, you think of howling at the moon.


“In the morning it became clear why the dog had been howling. I got up and went to the barn to milk the goats. I looked and saw right on the doorstep a goat with its neck thrown back unnaturally. On the neck there was something like a bite mark, the belly was torn, and there were huge claw marks. I came over bad and started screaming, I ran to the house to see the children were alright,” she said.


Whatever killed the goats never tried to eat the flesh, it just drank its victim’s blood.


Natalya’s news of a near-mythical chupacabra spread like wildfire among residents of Krasnoginnoe village, then it became clear that nearby Tolmachevskoye and Chick villages had also been afflicted.


The blood-suckers had targeted cattle in Tolmochevskoye. “It’s come from the devil. I’ve seen it. My brother, even when he lived near seven years ago accidently photographed a chupacabra. He took the usual family picture and then saw the demonic face through the kitchen window. Grey-red it was, such an unpleasant face, like a bat with fangs,” Natalie’s uncle Viktor Shushpanov told KP.


“My brother showed me this photograph and upon the advice of his family he burned it,” he said.


“All the people are scared, they fear that the creature will move onto children,” the head of the village said. “We have organized night patrols of six people. We walk through the village, on the look out for this wickedness. But so far we have had no results.”

While hopes for speedy retribution are fast diminishing the beast has turned out to be a boon to troubled parents, presenting a very useful threat for naughty children.


The chupacabra is a recent legend, originating from mid 1990s . It is supposedly a heavy creature, the size of a small bear, with a row of spines reaching from the neck to the base of the tail.


But there seems to be a more prosaic explanation: Discovery News reported in 2010 that what were believed to be chupacabra in the turned out to be wild dogs infected with a deadly form of mange. The put forward a similar theory. -themoscownews


Animal mutilations remind us of the strange events that rocked the province nearly ten years ago. Pratt, 51, owns a locker manufacturing facility in Alta Italia. He told the El Diario newspaper that “animals mutilated in a similar fashion” were found on his fields just like they did back then.


At the time, the phenomenon was ascribed to extraterrestrial beings and served to nurture peasant superstitions like the “Chupacabras”. SENASA advised at the time that mutilations in over a hundred of these cases could be blamed on the “red-muzzled mouse”. However, this species does not exist in the region and the mystery was never explained.


Pratt did not make his discovery widely known; some friends discouraged him because “they say that these are just fantasies that people make up.” However, the story became known and Alta Italia’s FM radio station broadcasted it this Wednesday morning.


German Schreiber, the officer-in-charge of the Sheriff’s office, traveled on Wednesday noon to the “El Iman” ranch, belonging to the Pratt family. It is located 13 kilometers from town, and he was accompanied by the town’s veterinarian.


“He was unable to determine the cause of death. It’s just like the cases that occurred at that time,” noted the policeman.


In an interview with El Diario, Pratt says that his foreman found two Aberdeen Angus calves, each weighing 350 kilograms, mutilated in a very strange way and without any traces of blood around them. All this in a 60 hectare spread.


“One was missing its scalp completely, all the way from the muzzle to the left. The bone has been peeled away at the carretilla, and the tongue is missing along with skin from its throat. There isn’t a single drop of blood anywhere; the incision of the skin is perfect, as if done with a razor,” he says, astonished.


The other animal is missing its upper teeth. It’s upper lip is burned to a dark blue, and half of its tongue is missing. No other signs are visible.”


The discovery stupefied the employee who came across the animals as he toured the property, and even Pratt himself. “The man has been working in the field for forty years and is used to seeing dead animals, yet he never saw anything like it. I’ve also seen many dead animals, but never under these circumstances,” he added.


“Carrion animals aren’t involved. No way. It isn’t a puma, or a wild boar, or even a carancho,” he noted.


Aside from the dead animals, two gates along the ranch fences were found with their chains broken, and the ox cart was disconnected.


Pratt did not inform the police, nor did he make the case known to any other agency, since he is well aware of the reply offered by SENASA at the time. “They determined that it was either a mouse or a carancho (vulture). I know that. But if you ask me, I’ll say no. This is something that I’ve never seen, something that really attracts attention.”


Along with his son Mauricio, 18, he took photos of the animals, which were left on the field in a state of decomposition.


Pratt is 51 and he is known in town as “an earnest man.” “I know the subject. I was raised in the countryside. I’m not crazy. I’m normal, like any other local,” he jokes, as he recreates the circumstances of time and space in which the surprising animal mutilation occurred. “The kid who surveys the fields left at one o’clock and returned the next day at noon. [The mutilation] must have occurred during the course of that afternoon, night and the morning of the next day. We found no signs or traces that suggested that the death had been brought about by a bullet or something. We don’t know what killed them.”


“The incision is perfect. Completely so. It’s very strange. That’s my definition. I can’t say what it is, but it’s no carrion eater, vulture or puma,” he adds.


The field where the animals appeared is not close to any rural road or route. “I know about livestock, and I’ve seen many dead animals, but never anything like this,” he insists. “I would like to have someone study this so that the matter can be cleared up someday. At the time they blamed carrion animals, and that’s why no progress was ever made. I find that odd.”


“Did you feel fear when you found this?” asks the El Diario interviewer.


“No, bewilderment. The foreman’s been a cattleman for over 40 years. All the more so, it isn’t normal. He’s a man used to seeing all sorts of animals.”


Yet he admits having allowed paranormal phenomena enter his mind: “Some talk about flying saucers because they must be mentioned, if only to say something. The same goes with witches. I say I don’t believe in them, but they exist, they really do. How can I not believe? But I think its something else. Otherwise those weird things would turn un. I’m not saying that a flying saucer is going to come to my house, but this is weird. It’s surprising. It’s not lightning from a storm or anything customary. This is surprising.” - Scott Corrales - Explicata
Posted by arclein at 12:01 AM