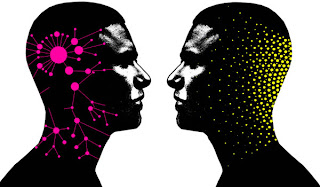 God, the soul, spiritualism and religion have occupied human consciousness universally since the beginning.  Yet the lack of even a purported received knowledge base has forced attempts to understand these topics to fall into the region of pure speculation.

With the center confused, it is no surprise that much of humanity takes the easy route and simply rejects it all.  God does not clearly and visibly speak to the folks who speak for him or even to those who might be worthy, thus we are left with the reduction to rejection.

Without any intellectual base provided, scholarship produced a theory of FORMS that are not real in our physical world.  Thus GOD became a mystical, ethereal entity that governs ALL.  Let me see.  That is two self defining adjectives and a hand wave excluding something that can be described as NOT universe.  This apparent non physical nonsense has been in retreat as science has advanced.  The keepers of the FORMS presently struggle to prescribe these ancient ideas to the present while failing to understand that the ideas themselves were formed in an ocean of ignorance.

The principle reason for making this particular conjecture is two fold:

1                    Mankind will achieve artificial immortality inside the next forty years by been able to copy the information content of the organic brain onto a physical substrate that may well look like a crystal.  Just as clearly human longetivity will in the same time approach 1000 years.  An immediate inference is that the business of humanity can also be entrusted to a distributed fully connected super computer system that can only be described as GOD.  In short, we are going to do it all by ourselves anyway.

2                    We have developed ample support for the idea that mankind arose around 40,000 years ago to the same technical level we have presently achieved.  Thus they had 25,000 years in which to achieve everything described in (1).  They then chose to evacuate Earth around 15,000 years ago in order to trigger a crustal shift that would end the Northern Ice Age.  We will not outline the arguments here but they are available here throughout this blog.

An immediate result of these conjectures is that it allows us to re interpret a lot of ancient scripture.  Noah’s report is a description of a settlement group sent back to establish agriculture after the collapse of the Ice Age had lifted sea levels 300 feet and things had settled down.  This is one clear example.  These scriptures were never reporting on a mystical GOD, but rather a material GOD.  That is a huge sea change in our understanding of the texts.
The point is however, is that mankind was allowed to largely forget the physical reality of GOD and all the rest and to largely get on with the real task of terraforming the Earth.  Thus in place of exact knowledge we have a speculative understanding written in the language of our deep ignorance.  We also have an empirical understanding of the existence of the soul through the efforts of seekers.

This is extraordinary.  The soul is a natural physical outcome of the first part of the conjecture.  A living being wants and craves immortality and will establish an artificial system to provide just that. Thus once this was established perhaps 40,000 years ago it became possible and desirable to inject souls that are available into new born hosts to provide a preset personality and some access to prior memories and talents.

Knowing that the soul is a human being’s direct link to GOD and also the prior experiences of the soul in earlier incarnations clarifies empirical data coming to us from spiritual sources.  Meditation is an effort to retreat from the senses to allow one to experience the present through one’s soul.  Claims are made but what is known is that there is a change of light as a first level, the advent of a channel of sound as a second level and additional sensations on a couple of successive levels.  What we do know is that individuals who succeed at least once become convinced of its truth.

Besides meditation whose object is to experience the additional planes of existence, we also have prayer in which the supplicant pleads to GOD or an intercessor for his own needs.  This is the common experience of most that follow religion.  Again this is passing information through the conduit of one’s own soul though that is not as obvious.

If you have made it this far you must understand that the soul is a physical reality that links you directly to a physical GOD and serves to preserve the present individual reality and to mature the soul itself.  This also explains the real danger to the soul if it rejects the reality just described.  It appears that the soul must make its passage back to its afterlife and to do this it must at least believe that is were it is going.  Please notice my language.  There are a whole range of afterlives that one could accept and even plausibly self create.

Once you accept the physical reality of the soul, one also must accept the reality of been both guided and judged by GOD.  We inexorably arrive there.  After that conclusion is reached, you then face the difficulty of gaining guidance and the problem of course is that few can actually provide such guidance at all.  In the meantime, a clear understanding of the physical reality of GOD and Soul allows the individual to accept conforming information with a clear insight.

My own example was to slide into a light trance on a pleasant afternoon and then engage in a visit to the afterlife abode of my long deceased mother with whom I was never close so this was unexpected.  The passage was similar to out of body reports but unique things were observed.  I saw planted cabbage varieties but from unrecognized types as I passed to an abode not unlike my childhood home.  A wealth of unusual and conforming detail was available to me but importantly the apparent solar illumination was shifted spectrally to golden.  It was as if my eyes were able to see a broader spectrum.  What made it convincing was the sweep of new information I was observing.  It was not hard to conclude that my mother, who obviously has been watching over me, chose this time to show me confirmation of my own ideas and advancing interpretations.

I am satisfied that this was a real event and that it conforms to many other such reports that have attracted controversy over the years.  The take home is to open yourself to the possibilities and see were it takes you.

The purpose of this essay is to properly describe the nature of the soul as a physical manifestation of a physical GOD.  The language presently used by spiritualists is acceptable and recognizes the individual nature of a specific soul in time.