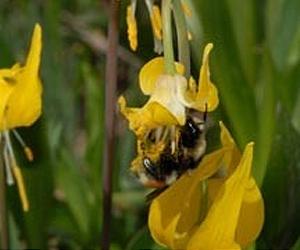 We continue to have an ongoing problem with declining populations of pollinators in the wild that is almost certainly linked in some manner to our usage of pesticides.  The manufacturers will as usual stop at nothing to deny and obfuscate that linkage as long as possible even though they are realistically the only prospective causation that makes any natural sense.

The greenhouse problem is quite a different situation.  There the closed eco system ultimately encourages an overgrowth of pathogens that sooner or later depresses the population.  We have seen this happen with other similar situations.  The good news is that this problem can be solved although the solution is not presently in general circulation.  I know this because associates are presently restoring the farmed cricket population and are now tackling chicken croup in particular with exceptional results.

There will be no other magic industrial bullet that solves this.

However, the science is essentially in and the farm community has learned that it is possible to use completely natural methods in conjunction with industrial farming methods to produce the same yields and a higher more valuable product.  The shift is very much under way and is certainly gathering momentum and industrial processors are also starting to come around.

It will still take a generation or even two to complete the process but in the long term we can be very optimistic.  During the same time period, I expect to see biochar actively implemented to preserve soil nutrition and we will end the nutrient escapement problem and have a completely sustainable industrial agriculture.

In short, all the solutions are actually at hand and we are all learning how to use them now.

The Flight of the Bumble Bee: Why Are They Disappearing

by Dennis O'Brien for USDA

Evidence gathered so far shows that the range and populations of B. occidentalis have declined, that it is not as genetically diverse as it used to be, and that it has higher pathogen prevalence than other bee species with stable populations.

A Department of Agriculture (USDA) scientist is trying to learn what is causing the decline in bumble beepopulations and also is searching for a species that can serve as the next generation of greenhouse pollinators.

Bumble bees, like honey bees, are important pollinators of native plants and are used to pollinate greenhouse crops like peppers and tomatoes. But colonies of Bombus occidentalis used for greenhouse pollination began to suffer from disease problems in the late 1990s and companies stopped rearing them. Populations of other bumble bee species are also believed to be in decline.

Many greenhouse growers now use commercially produced Bombus impatiens, a generalist pollinator native to the Midwest and Eastern United States and . But scientists are concerned about using a bee outside its native range, and some western states restrict the import and use of non-native bees.

If B. impatiens were to escape and form wild colonies in the western , they could compete with native bees for food and resources and expose native bumble bees to pathogens they are ill equipped to combat.

Strange has been studying a pretty, orange-striped generalist named Bombus huntii, native to the western half of the country, that could be used in greenhouses in the western . He is determining how to best rear B. huntii in a laboratory setting, a vital step in commercializing it.

To understand the decline of B. occidentalis, Strange and his colleagues also have been tracking its habitat range and population trends.

Evidence gathered so far shows that the range and populations of B. occidentalis have declined, that it is not as genetically diverse as it used to be, and that it has higher pathogen prevalence than other bee species with stable populations. The results were recently published in the Proceedings of the of Sciences.
Posted by arclein at 12:01 AM

I know... use more roundup and then ask the organizations which were bribed into approving it to investigate whether it's harming humans, bees, etc. USE MORE ROUNDUP IT'S GOOD FOR THE EVERYBODY.