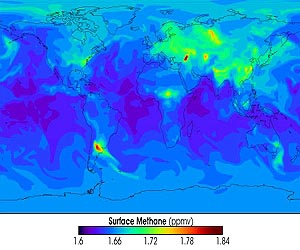 Methane has attracted a lot of misplaced attention from the global warming crowd and this continues the tradition.  It is sort of amusing to see the arguments marshaled in the face of a major reversal.

I have argued before that methane simply does not matter.  It is produced everywhere by the soil in particular and then migrates directly upward out of harm’s way.  In time it is consumed in the troposphere.

It has always been irrelevant with no evidence of real accumulation anywhere.  That has not stopped debate however.

Two new UC Irvine papers reach markedly different conclusions about why methane, a highly potent greenhouse gas, unexpectedly leveled off near the end of the 20th century. They appear in the journal Nature.

Both note that after decades of increases due to worldwide industry and agriculture, the tapering off of the hazardous hydrocarbon in the atmosphere - which began in the 1980s - was remarkable.

"It was an amazing mystery as to why this occurred," said earth system science professor Eric Saltzman, a co-author of one paper, which suggests that reduced use of petroleum and increased capture and commercial use of natural gas were the driving factors. Huh? What reduction?

A second UCI paper found that water efficiency and heavier commercial fertilizer use in the booming Asian farming sector provided less fertile ground for soil microbes that create methane, while at the same time increasing nitrous oxide, another greenhouse gas.
Associate researcher Murat Aydin, lead author on the first paper, drilled into South Pole and glaciers to extract trapped air as much as a century old. The samples were analyzed for ethane, a chemical that has some of the same sources as methane but is easier to track.

"Levels rose from early in the century until the 1980s, when the trend reverses, with a period of decline over 20 years," Aydin wrote. "We find this variability is primarily driven by changes in emissions from fossil fuels."

The authors posit that replacement of oil with lower-priced natural gas could be key.

The second team measured and analyzed the chemical composition of methane in the atmosphere from the late 1980s to 2005. They found no evidence of fewer methane atoms linked to fossil fuel.

Instead, the sharpest trend by far was changes in the Northern Hemisphere linked to new farm practices, mainly the use of inorganic fertilizers instead of traditional manure and drainage of fields mid-season.

"Approximately half of the decrease in methane can be explained by reduced emissions from rice agriculture in Asia over the past three decades, associated with increases in fertilizer application and reductions in water use," said lead author Fuu Ming Kai, who wrote his UCI doctoral thesis on the work and is now with the Singapore-MIT Alliance for Research and Technology.

Martin Heimann, director of Germany's Max Planck Institute for Biogeochemistry, was asked by Nature editors to write a commentary on both papers.

"It is indeed very remarkably rare that two differing studies about the same subject come out from the same department - I can't think of a similar case. But I think both analyses are scientifically sound and in themselves consistent," said Heimann, lead author on the Nobel Prize-winning Intergovernmental Panel on Climate Change reports. "At this time I would not favor one over the other."

Heimann has invited members of both teams to a September symposium at which, he said, "we will discuss the two studies from all angles."

Identifying methane sources is urgent. Research has shown that the fast-acting greenhouse gas is the second-largest contributor to climate change. Scientists around the world were heartened by the stabilizing levels, but there are now signs the hydrocarbon may be on the upswing again.

"We will need to reconcile the differences," said earth system science professor James Randerson, a co-author on the second paper. "The important thing is that we must figure out - as scientists and a society - ways to reduce methane emissions."

Other co-authors on the ethane paper are UCI's Kristal Verhulst, Qi Tang, Michael Prather and Donald Blake; Mark Battle, from Maine's Bowdoin College; and Stephen Montzka, from the National Oceanic and Atmospheric Administration. Additional contributors on the microbial paper are Blake and retired UCI researcher Stanley . Funding was provided by NASA, the National Science Foundation and the W.M. Keck Foundation