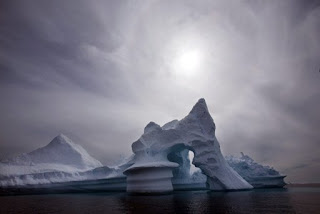 For once we were able to directly link the cause with the effect in real time and clearly confirm that tsunamis will crack large pieces of ice off the floating shelf.

It is always nice to see a reasonable speculation so clearly confirmed.

I am reminded that we have had two major tsunami producing earthquakes recently.  Both would be classed as 500 year events.  Both sharply impacted populated shorelines.  The extent of the maximum damage in either case was along perhaps a two hundred mile front for close in impact.

It would be well worth while to identify such prospective targets on a worldwide basis.  We really need to know.  I have no doubt that we can make land based damage fairly controllable and minimize the loss of life.  We only have to compare the damage inflicted on to that inflicted in several other locales with proper building codes to know that better is possible.  I go further and argue that the advent of cost effective stress skin building panels will make houses strong enough to actually withstand shaking as bad as anything ever experienced.

There is no creditable protection against tsunamis.   We do however retain the option of never building in the at risk zones.  Any coastline exposed to a tsunami risk and that means any active fault not too far off shore needs to establish building codes that terminate all building in at risk zones.  It may take a century to wind everything down but once the land is condemned for further occupation, time will slowly eliminate structures.

We in the Northwest have the great good fortune of having a large barrier island in position to protect the main river delta and population centers.  That will not stop lesser waves impacting along the coast southward were there are some exposed shorelines and a nuclear reactor as well.

The faults in are at least on shore.  So for the west coast, while we have a serious exposure to major quakes, we have limited local tsunami exposure which is good news.  It will still make a nasty local mess however.

Of a far more serious nature there is the possibility of a huge Icelandic event comparable to in 1159 BC.  A repeat could cause massive damage to cities on the Eastern Seaboard and the European coast.  The original felled the European Bronze Age civilization.

What this reveals is that it is not so difficult to narrow down our real risks and act accordingly.  We also need to prepare evacuation programs much better and to think in terms of high ground.

The massive March 11 earthquake and its ensuing tsunami were so powerful that they broke off huge icebergs thousands of miles away inAntarctica, according to a new study.

The calving of icebergs (where a huge chunk of ice breaks off from aglacier or ice shelf) from the Sulzberger Ice Shelf in Antarctica was linked to the tsunami, which originated with the magnitude 9.0 earthquakeoff the coast of the Japanese island of Honshu, by satellite observations of the Antarctic coast immediately after the earthquake.

Icebergs have been reported to calve following earthquakes before, including after the magnitude 6.3 earthquake that struck Christchurch, New Zealand, on Feb 22. But the new finding marks the first direct observation of such a connection between tsunamis and iceberg calving.

After the Japan tsunami was triggered in the Pacific Ocean, Kelly Brunt, acryosphere specialist at Goddard Space Flight Center in Greenbelt, Md., and colleagues immediately looked south — really far south. Using multiple satellite images, Brunt, Emile Okal of and Douglas MacAyeal of the of were able to observe new icebergs floating off to sea shortly after the sea swell of the tsunami reached .

"In the past, we've had calving events where we've looked for the source. It's a reverse scenario — we see a calving and we go looking for a source," Brunt said. "We knew right away this was one of the biggest events in recent history — we knew there would be enough swell. And this time we had a source."

To sum up the dynamics of the event: An earthquake off the coast of caused massive waves to explode out from its epicenter. Swells of water swarmed toward an ice shelf in Antarctica, 8,000 miles (13,600 kilometers) away, and about 18 hours after the earthquake occurred, those waves broke off several chunks of ice that together equaled about two times the surface area of . According to historical records, this particular piece of ice hadn't budged in at least 46 years before the tsunami came along.

In what could be one of the more lasting observations from this whole event, the bay in front of the Sulzberger shelf was largely lacking sea ice at the time of the tsunami. Sea ice is thought to help dampen swells that might cause this kind of calving. At the time of the Sumatra tsunami in 2004, the potentially vulnerable Antarctic fronts were buffered by a lot of sea ice, Brunt said, and scientists observed no calving events that they could tie to that tsunami.

"There are theories that sea ice can protect from calving. There was no sea ice in this case," Brunt said. "It's a big chunk of ice that calved because of an earthquake 13,000 kilometers away. I think it's pretty cool."

The study was published today (Aug 8) in the online edition of the Journal of Glaciology.
Posted by arclein at 12:01 AM