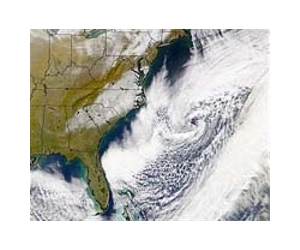 This new insight in weather interpretation addresses the causation of our most surprising weather events that were utterly missed on the way in.

I will never be the full answer but it certainly is a great improvement and we may learn that in practice that it does consistently nail the problem events.  That alone will be a great confidence booster to users of the service.

It is surprising that the original protocol has stood the test of time for so many years.  We are certainly getting something right.

Taking a fresh look at the weather

With groundbreaking research, Dr David Schultz, from The believes the way we learn about the weather is wrong and has been wrong for 90 years.

Writing in the journal Bulletin of the American Meteorological Society, Dr Schultz, along with his colleague Professor Geraint Vaughan, has worked out that the traditional model for how low pressure systems evolve is deeply flawed.

The model, used since the 1920s and devised by Norwegian meteorologists, is that when a storm occludes (evolves), it will automatically begin to weaken and pose little danger of severe weather.  Instead, some of the biggest storms in the 's history, such as the Great Storm of October 1987, did not fit this basic understanding.

However, argues Dr Schultz, this is not the case - occluded storms may well contain strong winds and regions of heavy precipitation.

Naturally, many in the public recognize that. The Great Storm of October 1987 and the Burns' Day storm of January 1990 were both clear reminders: occluded, but still deadly. Dr Schultz's new model addresses these weaknesses with the Norwegian model because the prior belief that occluded storms were weak could lead to poorly-informed predictions or forecasts.

Dr Schultz, from the University's School of Earth, Atmospheric and Environmental Sciences, claims they now know that the deepening of a low pressure system is not dependent on when a cyclone occludes.

Specifically, the new model is called 'wrap up', to emphasize that the wind around the occluding cyclone wraps up the low pressure system into an anticlockwise-spiralling cloud pattern.

Dr Schultz said: "With this new interpretation of the occlusion process we can explain why not all low pressure systems occlude - the winds are not strong enough to wrap up the storm.

Dr Schultz argues that how we teach about low pressure systems is wrong, and that textbooks, public information guides and models will need to be radically updated to ensure the next generation of meteorologists, as well as the public, are in possession of all the facts.

He added: "All books from postgraduate-level textbooks to basic weather books for the public need to be rewritten to convey the correct understanding. What we teach students in school needs to be changed. And forecasters need to be retrained to have this latest information."

Another result of Dr Schultz's research is a better explanation for the observed structure of storms. Previously, meteorologists believed that occluded cyclones and their associated fronts could tilt eastward with height or tilt westward with height, roughly in equal measure.

This new research demonstrates that westward-tilting occluded fronts are rare and provides an explanation for why. Dr Schultz added: "I hope that this model will help people understand the particular weather conditions associated with these potentially hazardous storms. Yet, this research shows how much more remains for us to learn about the weather around us."