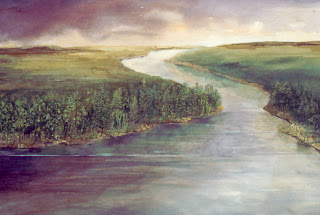 This is a bit of ancient evolution not often thought about but the emergence of the cellulose chain was huge in terms of plant development.  It all became possible.

This work pushes it back to half a billion years although I suspect much was properly developed first in the ocean long before.

It also draws attention to the fossil beds in this part of Atlantic Canada.  The rocks are truly ancient here.

Scientists in have discovered evidence that wood first evolved on the land the province now occupies.

Randy Miller, the geology curator at the Museum of New Brunswick, said the province has some of the richest fossil deposits anywhere in the world.

The new evidence pushes the origins of wood back further than previously thought.

"This evidence shows that plants developed a woody structure about 395 to 400 million years ago. So it pushes our knowledge of that part of plant evolution back a little more," he said.

The fossils were discovered on the Campbelton coast. paleontologist Patricia Gensel published the finding this week in the journal Science.

Miller said Gensel's work sheds light on life during the Devonian period of Earth's history. It was a bleak time before animals when the tallest plants were only knee high and clustered around rivers and marshes.

"If you were to be dropped in Campbelton you would see volcanoes; you'd look across the landscape and there would be no trees. You'd walk down to the river margin or the estuary margin and you'd be walking through brush," he said.

The innovation of wood gave plants the strength and the structure to colonize inland.

Botanist Stephen Clayden said the chance adaptation of woody cells had important advantages for drawing more water into the plant.

"It didn't have that kind of mechanical, or conducting, plumbing system to get water very far above the soil," he said of plant life at the time. "The limitations were really like those of say a sponge."

The findings show the wood cells evolved first into conifers and later the broadleaf forests that make so much of life on the planet today possible.

"Wood formation and the origin of wood formation is one of the most significant features in the history of the Earth," Clayden said.

Gensel has promised to return the fossils to the . The first wood fossils will be added to a collection of many more dead-end plants and species of the period dating back nearly half a billion years.
Posted by arclein at 12:01 AM