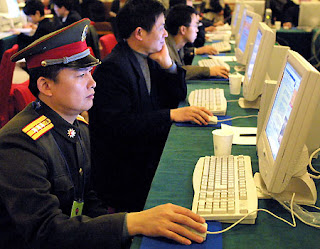 In the end, someone is been paid to do this and volume justifies his paycheck.  The value of those efforts on a case by case basis is quite another matter and that is a function of sophisticated interpretation work.  It is forgotten that too much data can easily bury important data better that any security in the world.

In practice, if you already know the answer, it is easy to zero in on useful support.  If you know an individual decision maker is important you can read his mail.  That is all obviously pretty damaging.  After that it starts to fall off pretty quickly.

After that plenty of material that is simply unknown or unexpected can be in plain sight and no interloper the wiser.

I am not so convinced that our world of high security is particularly useful in the majority of cases except rather briefly where surprise gives a market premium.  It might be cheaper to pay an in house person to produce reams of disinformation to cloud the issue.  After all the next design initiative by Apple may be important, but that is easily obscured by the other fifteen concepts that were rejected and then handed about loosely.

In the end the acquirer ends up with reams of disconnected data to interpret never knowing what is actually important or even been able to recognize it.  You can be sure that the top talents will not be paid to eschew useful work on the next great weapon in order to sort through tons of clouded data in the hopes of learning some great secret. One only needs to look at the great email dump related to the climate warming fiasco to see just how chancy this all becomes.

It takes the right human mind to advance the data and if you have that person, then you hardly need someone else’s mail.

(Reuters) - Security experts have discovered the biggest series of cyber attacks to date, involving the infiltration of the networks of 72 organizations including the United Nations, governments and companies around the world.

Security company McAfee, which uncovered the intrusions, said it believed there was one "state actor" behind the attacks but declined to name it, though one security expert who has been briefed on the hacking said the evidence points to .

The long list of victims in the five-year campaign include the governments of the United States, Taiwan, India, South Korea, Vietnam and Canada; the Association of Southeast Asian Nations (ASEAN); the International Olympic Committee (IOC); the World Anti-Doping Agency; and an array of companies, from defense contractors to high-tech enterprises.

In the case of the United Nations, the hackers broke into the computer system of its secretariat in in 2008, hid there for nearly two years, and quietly combed through reams of secret data, according to McAfee.

"Even we were surprised by the enormous diversity of the victim organizations and were taken aback by the audacity of the perpetrators," McAfee's vice president of threat research, Dmitri Alperovitch, wrote in a 14-page report released on Wednesday.

"What is happening to all this data ... is still largely an open question. However, if even a fraction of it is used to build better competing products or beat a competitor at a key negotiation (due to having stolen the other team's playbook), the loss represents a massive economic threat."

McAfee learned of the extent of the hacking campaign in March this year, when its researchers discovered logs of the attacks while reviewing the contents of a "command and control" server that they had discovered in 2009 as part of an investigation into security breaches at defense companies.

It dubbed the attacks "Operation Shady RAT" and said the earliest breaches date back to mid-2006, though there might have been other intrusions. (RAT stands for "remote access tool," a type of software that hackers and security experts use to access computer networks from afar).

Some of the attacks lasted just a month, but the longest -- on the Olympic Committee of an unidentified Asian nation -- went on and off for 28 months, according to McAfee.

"Companies and government agencies are getting raped and pillaged every day. They are losing economic advantage and national secrets to unscrupulous competitors," Alperovitch told Reuters.

"This is the biggest transfer of wealth in terms of intellectual property in history," he said. "The scale at which this is occurring is really, really frightening."

Alperovitch said that McAfee had notified all 72 victims of the attacks, which are under investigation by law enforcement agencies around the world. He declined to give more details.

Jim Lewis, a cyber expert with the Center for Strategic and International Studies, said it was very likely was behind the campaign because some of the targets had information that would be of particular interest to .

The systems of the IOC and several national Olympic Committees were breached before the 2008 Games. And views as a renegade province, and political issues between them remain contentious even as economic ties have strengthened in recent years.

"Everything points to . It could be the Russians, but there is more that points to than ," Lewis said.

McAfee, acquired by Intel Corp this year, would not comment on whether was responsible.

In Taiwan, an official of the Criminal Investigation Bureau, which has a cyber crime unit, said he had no knowledge of the McAfee report but added there had been no cases in recent years of hacking of government websites.

An official from the Japanese trade ministry's information security policy team said it was difficult to determine whether a specific government lay behind a cyber attack "although we see which countries the attacks originate from."

A team put together to investigate hacking was "finalizing some guidelines. We aim to raise the security level as a whole and build a partnership between private sector organizations where information can be shared to prevent such attacks."

Vijay Mukhi, a cyber-expert based in , says some South Asian governments were highly vulnerable to hacking from .

"I'm not surprised because that's what does, they are gradually dominating the cyberworld," he said. "I would call it child's play (for a hacker to get access to Indian government data) ... I would say we're in the stone age."

An Indian telecommunications ministry official declined to say whether he was aware of the hacking on the government.

The U.N. said it was aware of the report, and had started an investigation to ascertain if there was an intrusion.

McAfee released the report to coincide with the start of the Black Hat conference in Las Vegas, an annual meeting of security professionals who promote security and fight cyber crime.

(Additional reporting from Tom Miles in Geneva, Jack Kim in Seoul and James Pomfret in , editing by Tiffany Wu, Martin Howell, Ron Popeski and )
Posted by arclein at 12:01 AM