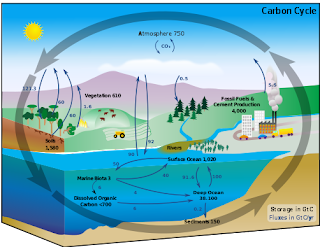 This is extraordinarily important to our understanding of climate science and begins the disentangling of the erroneous theory of Anthropogenic Global warming.  The argument in favor of CO2 as a climate driver was always seriously suspect and this blog from the very beginning in 2007 chose to keep the rising CO2 phenomena separate from climate trends and theory.

Now we have a potent argument that CO2 levels are determined by the heat content of the atmosphere but not the other way around.

In fact ice history said as much and certainly was the chief reason few geologists supported the AGW theory.

This work makes the linkage much more immediate.  The much discussed decadal lag time disappears and never existed.  In fact, a higher CO2 levels implies a warmer environment.

The abstract for his talk is here:

Carbon dioxide is emitted by human activities as well as a host of natural processes. The satellite record, in concert with instrumental observations, is now long enough to have collected a population of climate perturbations, wherein the Earth-atmosphere system was disturbed from equilibrium. Introduced naturally, those perturbations reveal that net global emission of CO2 (combined from all sources, human and natural) is controlled by properties of the general circulation – properties internal to the climate system that regulate emission from natural sources. The strong dependence on internal properties indicates that emission of CO2 from natural sources, which accounts for 96 per cent of its overall emission, plays a major role in observed changes of CO2. Independent of human emission, this contribution to atmospheric carbon dioxide is only marginally predictable and not controllable.

Professor Murry Salby holds the Climate Chair at and has had a  lengthy career as a world-recognised researcher and academic in the field of Atmospheric Physics. He has held positions at leading research institutions, including the for Atmospheric Research, , and the of , with invited professorships at universities in Europe and . At , Professor Salby uses satellite data and supercomputing to explore issues surrounding changes of global climate and climate variability over . Professor Salby is the author of Fundamentals of Atmospheric Physics, and Physics of the Atmosphere and Climate due out in 2011. Professor Salby’s latest research makes a timely and highly-relevant contribution to the current discourse on climate.

The podcast for his talk is here.  Unfortunately there is no video so you can’t see his graphs.  But the talk is very lucid, you can certainly get the point.  The entire podcast is an hour, with his formal presentation about a half hour, and questions for the remaining half hour.

This talk was given in June at the IUGG meeting in , and apparently created quite a stir.    A journal paper is in press, expected to be published in about 6 months.  Some of the results will be in his forthcoming book Physics of the Atmosphere and Climate that will be available Sept 30.

Andrew Bolt has some reactions in the Herald Sun:

Salby’s argument is that the usual evidence given for the rise in CO2 being man-made is mistaken. It’s usually taken to be the fact that as carbon dioxide concentrations in the atmosphere increase, the 1 per cent of CO2 that’s the heavier carbon isotope ratio c13 declines in proportion. Plants, which produced our coal and oil, prefer the lighter c12 isotope. Hence, it must be our gasses that caused this relative decline.

But that conclusion holds true only if there are no other sources of c12 increases which are not human caused. Salby says there are – the huge increases in carbon dioxide concentrations caused by such things as spells of warming and El Ninos, which cause concentration levels to increase independently of human emissions. He suggests that its warmth which tends to produce more CO2, rather than vice versa – which, incidentally is the story of the past recoveries from ice ages.

The Earth’s carbon cycle is not a topic on which I have any expertise.  A good overview article is provided by NASA’s earthobservatory.

Climate models have begun to include an interactive carbon cycle in the CMIP5 simulations.  NASA has been trying to launch a satellite to measure global carbon, an effort which remains troubled and plagued by continuing delays.

JC comments:  If Salby’s analysis holds up, this could revolutionize AGW science.  Salby and I were both at the University of Colorado-Boulder in the 1990′s, but I don’t know him well personally.  He is the author of a popular introductory graduate text Fundamentals of Atmospheric Physics.  He is an excellent lecturer and teacher, which comes across in his podcast.  He has the reputation of a thorough and careful researcher.
While all this is frustratingly preliminary without publication, slides, etc., it is sufficiently important that we should start talking about these issues.  I’ll close with this text from Bolt’s article:

He said he had an “involuntary gag reflex” whenever someone said the “science was settled”.

“Anyone who thinks the science of this complex thing is settled is in Fantasia.”
Posted by arclein at 12:01 AM

I am not a Scientist and as such have no credibility but my god it doesn't take a genius to understand the basics of atmospheric warming and be able to read a simple graph that shows temperature goes up first followed by CO2. You need to ask if CO2 is the driver of temperature why does the Earth release more when it warms and if CO2 makes the temperature go up what makes CO2 go down? If CO2 warms at low temperature, neutralizes at mean temperature and cools at high temperature it would put the graphs in perspective. Just as H2O is ineffective at low temperature, creates and increases temperature at mean and rises and cools to maintain temperature. Maybe if the atmospheric composition was examined as a whole we would conclude the Sun sets the maximum and the molecules and the surface of the earth reduce it and conserve it. Whether I'm right or wrong but I do know there's a lot more to how our atmosphere works than one molecule called CO2.