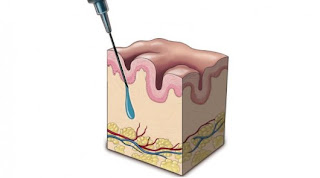 The purpose of all this is to allow the replacement of lost tissue that has led to disfigurement.  It will surely lead to outright body sculpting once the system is proven to be truly stable.  Replacing the present breast implant methodology comes immediately to mind if it turns out to be a superior approach.

This certainly is a far more flexible approach and certainly lends itself to post implantation shaping before actual setting.

Somehow I suspect this will soon be available to men looking also for sexual enhancement.  It looks far too easy for the pirate crowd to run with. 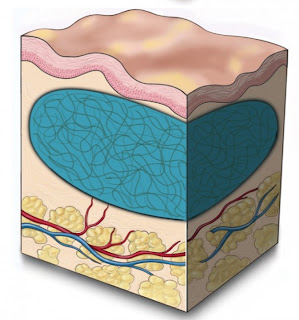 Soldiers whose faces have been marred by explosions could be among the recipients of a new biomedical material designed to permanently replace soft tissue. Developed at the of Medicine in , PEG-HA is a composite consisting of synthetic and biological materials. Lab tests have indicated that it doesn't break down like pure biologicals, or get rejected like some synthetics.

PEG-HA is made from polyethylene glycol (PEG), a synthetic molecule used as a surgical glue, and hyaluronic acid (HA), a natural component in young peoples' skin, that gives it elasticity. Polyethylene glycol is also known for not causing severe immune reactions.

The substance is injected under the skin in a liquid state, and is then "set" like gelatin, by shining a light on the area - the energy from the light causes the PEG molecules to bond, trapping the HA molecules between them. 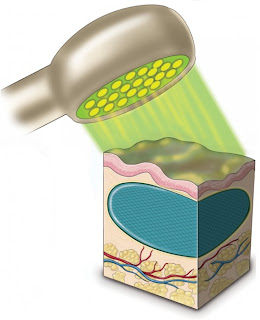 In the course of developing the material, researchers mixed up different concentrations of PEG and HA, and injected them under the back skin of rats. These injections were set using a green LED light, and then assessed after 47 and 110-day periods. While the HA-only injections deteriorated over time, those with higher amounts of added PEG stayed in place and maintained their form.

Approximately five drops of PEG-HA and straight HA were also injected under the belly skin of three human volunteers who were already undergoing tummy tucks. After 12 weeks, the PEG-HA implants were still intact. The volunteers did, however, report sensations of heat and pain during the setting process, and the implants did produce moderate inflammation in the surrounding areas - a response also noted in the rats.

While the Johns Hopkins researchers state that PEG-HA is not yet ready for widespread clinical use, they hope that it may eventually be of help to people who have been disfigured.

"Many of the skin fillers available on the market consisting of HA-like materials used for face lifts are only temporarily effective, and are limited in their ability to resculpt entire areas of the face," said Professor Jennifer Elisseeff. "Our hope is to develop a more effective product for people, like our war veterans, who need extensive facial reconstruction."

The research was recently published in the journal Science Translational Medicine.