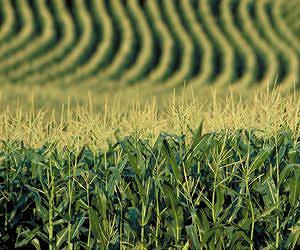 The trick here is to chemically induce dormancy until the corn is well established.  So why not go further and create a cover crop that contains a variety of species including alfalfa to provide nitrogen fixing.

The dormancy ends the whole need to rely on a monoculture approach which is all about out running the weeds.

Traditional gardening as I practiced it called for weed suppression until the crop plants were well established.  After that, weed removal was liable to damage crop plants and was not attempted.  During harvest there were plenty of weeds but they did not interfere with the harvest.

I would have been quite happy to actually choose the type of weeds.

Most important though, the use of cover crops is superior husbandry that also releases the stover back into the farm supply cycle for use in the making of biochar.

Ken Moore, professor in ISU's Department of Agronomy, says that the system using Kentucky bluegrass with strip till yielded more than 200 bushels per acre, which was equal to the control plot, and might also be the easiest for farmers to accept.

Soil quality, water quality, and possibly even farm profits will all benefit by using a perennialcover crop on corn fields that allows for similar yields to traditional farming methods, according to research.

Using standard agronomic practices and managing a perennial cover crop between rows of corn can keep soil, nutrients and carbon in the fields, a three-year study says. Plus, farmers will still be able to yield 200 bushels per acre, the study showed.

For the study, researchers looked at 36 potential ground cover species, different corn hybrids and various tillage practices and found that strip till planting using Kentucky bluegrass as the perennial cover crop is the combination the researchers will recommend to offer environmental benefits while maintaining yield.

Ken Moore, professor in ISU's Department of Agronomy, says that the system using Kentucky bluegrass with strip till yielded more than 200 bushels per acre, which was equal to the control plot, and might also be the easiest for farmers to accept.

Using ground cover to sustain and improve soil has become a focus of research because the need for biomass is increasing for use in producing biofuels.

Corn residue, or stover, usually remains on the ground after corn is harvested and helps reduce soil erosion and replenishes nutrients and organic matter.

The prospect of removing that stover to make biofuels causes many agronomists to fear that soil erosion will increase, while the remaining soil will suffer nutrient loss, says .

Researchers received a Sun Grant for biobased research to identify ground covers that are compatible with corn, find corn that is competitive with the ground cover, and develop management systems that minimize competition between the corn and the ground cover.

The Sun Grant Initiative is a national network of land-grant universities and federally funded laboratories working together to further establish a biobased economy.

is pleased the results were so encouraging, but additional work is required before he and others recommend farmers try it.

"Yes, we can do it," said of using perennial cover crops. "We don't know all the potential pitfalls of doing it. Under the circumstances that we tested, it does work."

Jeremy Singer, collaborator and assistant professor at the National Laboratory for Agriculture and the Environment, says that he also sees a lot of potential.

"The bottom line is that with our best treatment, all three years we found yields in the control and yields in the Kentucky bluegrass with herbicidesuppression and fall strip till were not different, which is very exciting," he said.

One focus of the research was to measure if cover crops help replace carbon in the soil that would be lost as stover is removed.

Using his own findings and examining previous research, Singer estimates that the Kentucky bluegrass treatment likely replaces as much carbon in the soil as stover would have, although he concedes that it is difficult to measure precisely.

And, the cover crops also provide at least 85 percent ground cover, meaning only 15 percent of the soil is exposed and susceptible to erosion, he said.

The cover crops also provide weed and insect suppression during the corn growing season, according to researchers.

To reduce competition between corn and Kentucky bluegrass, said bluegrass needs to be chemically treated in the spring to force it into dormancy while the corn gets started.

"Growing two (or more) plants in one field is not a new idea. Ecosystems have been doing it for millennia," he said.

Prior to the becoming an agricultural powerhouse, the land supported many different species of plant - each performing different functions for the soil and water quality. Now, we have just a few plant species dominating the landscape, each performing just one function, said .

"In this study," said, "we are trying to put those functions into a simple, easy-to-manage system that can have positive environmental impacts."