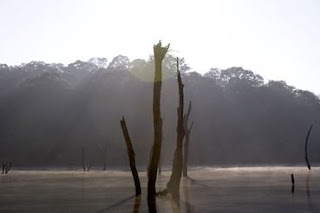 This is not the first such piece of hardware and certainly not the last.  At this point, it is fair to say that all that sunken timber is now becoming accessible and we are gaining real mastery of marine based heavy equipment which makes just about any problem accessible.

Again we see an industrial problem tackled and solved over a long development cycle lasting decades already.  I saw the early proposals back in the seventies.  The lesson is to never underestimate human ingenuity if there is a profit involved.

As forests around the world continue to be cleared to meet the global demand for timber, there remains millions of acres of trees that have so far been out of reach -- because they're underwater. These great submerged forests are the result of hydroelectric dams, which form lakes that have made harvesting them for wood a challenging task. But now, thanks to advances in underwater tree clearing technology, our planet's vibrant, oxygen producing forests could enjoy a reprieve from the chainsaw.

Every year, millions of acres of living forests are cleared -- but all the while, beneath the surface of man-made lakes, there are countless trees stripped of leaves and wildlife awaiting some better use. Amazingly, despite being submerged for often decades, these trees are still well preserved enough to be used as lumber. Historically, trying to tap into this unharvested resource had been laborious and dangerous work, though new machinery seems to be changing all that.

According to a report from Forbes, the latest innovation in underwater tree-clearing equipment is a specially designed boom-saw designed by 's Triton Logging, called SHARC, and it might offer new hope to living forests slated for clearing.

SHARC is a barge plus custom excavator with a saw on the end that can find, cut, and retrieve trees at depths even greater than 80 feet, using GPS, video, and sonar.

The innovation may mean big money: The small private firm, backed by institutional investors, estimates that 300 million trees worth $50 billion lie underwater, mostly in lakes formed when dams were built. That's true of the trees, which were flooded during a 1965 dam construction and are worth some $1 billion to $2 billion.

Of course, SHARC isn't the first machine designed access the treasure-trove of lumber that lies untouched in the deep. Five years ago, Triton Logging began using afleet of submarine lumberjacks, known as Sawfish, to clear underwater forests in . With some $50 billion worth of lumber beneath man-made lakes in that region of alone, the race to improve technology led to the most recent advancement.

Much of the harvest wood is destined to be shipped to places like India, Korea, and China, were demand for lumber continues to rise as manufacturing there increases -- which has been cited as a leading factor contributing to deforestation throughout Asia and Oceania. By tapping into the preserved, relatively lifeless forests under the word's unnatural lakes, living forests in some of the most fragile ecosystems on the planet may stand a better chance of avoiding the blade.