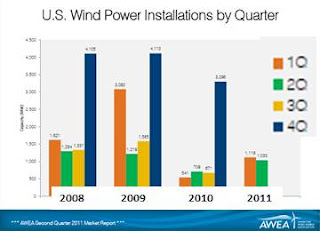 Wind was never my first choice as a source of renewable energy, but its mature status has allowed it to massively expand.  The decline in coal energy production makes it clear that wind’s power as a price taker is actually curbing that part of the market.

The next move will be into high power transmission able to cheaply shift power nationally through semiconductor cables.  This would access wind nationally and also effectively double or even triple our grid’s energy availability at the same time.  could then provide base power from a greatly expanded geothermal system.

On the other hand, it may all soon be mute if the Rossi Focardi reactor holds up to its promise.

In the meantime, wind turbines produce an awful lot of jobs in the rust belt and will always be welcome for that at least.  I did not understand Europe’s original enthusiasm for turbines, but any time you can happily employ most of your skilled workers while having it sort of paid for by the taxpayers over many years without going to war, it becomes a political must do.

Somehow I think we will meet the twenty percent mark for that reason alone.  I would personally hate to own a coal plant today.  The consumers even win because the wind producers always will take the available price and that means hitting the bid displacing coal and anyone else except Niagra.

A 72 percent year-on-year jump in this economy demands an explanation.

The wind industry added 2,151 megawatts of installed capacity in the first half of this year despite a bumpy economy. It was a 72 percent jump from 1H 2010’s 1,250 megawatts.

At the beginning of the 2H 2011, construction had started on another 7,354 megawatts of wind power capacity. It is the biggest single quarter “under construction” number since before the recession hit home in 3Q 2008.

Do these numbers herald the return of the 2006-to-2008 glory years? Or is there something going on behind the curtain?

In December of 2010, Congress extended the 1603 program for another year, through the end of 2011. A part of the 2008-09 stimulus program, the 1603 program allowed developers who could get construction underway promptly to take the value of a project’s tax credits as an upfront cash grant.

Many installations that began construction in late 2009 or early 2010 under the terms of the 1603 cash grant program came online this year.

As another part of the stimulus, wind’s PTC was extended through the end of 2012.

Whatever electricity production developers bring online before the PTC expires will earn a 2.3 percent discount on federal taxes. This tax bill reduction can be transferred to investors. Wall Street and other players still raking in the big bucks despite the floundering economy are willing to buy into wind projects to get those tax credits. 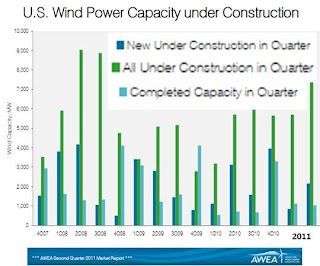 But there is much less activity scheduled for the beginning of 2013, said, because of uncertainty surrounding the PTC. Does that make the current upturn a bubble? Only if the PTC is not extended beyond 2012, suggested.

“All the other energy technologies have either a longer term tax credit or a permanent tax credit in place,” pointed out.

Denise Bode, AWEA’s CEO, continued to be optimistic about the industry’s hope for a PTC extension. "Wind tax credits enjoy broad bipartisan support, and since they're not spending programs, current projects are safe and prospects for the extension of the Production Tax Credit beyond 2012 are good," she argued.

“A lot of manufacturing and investment has gone into wind in the last five years,” said. Themanufacturing sector of the industry has built over 400 facilities and employs over 20,000 people. That growth dramatically increased the estimated fraction of projects’ average wind turbine domestic content cost from 35 percent in 2005-06 to 60 percent in 2010.

“There’s a lot at stake,” said, “and more reason than ever before that we need a stable and consistent policy.”

But developers, not inclined to put much faith in a political process that has generally been undependable toward the wind industry and has let the PTC lapse three times in the last decade, are working as fast as they can to get what they can into the ground and online before the deadlines.

Despite unpredictability surrounding the fate of its PTC, the wind industry continues to achieve new levels of accomplishment. It has built 35 percent of the nation’s new electricity generating capacity over the last four years, more than twice what has come from new coal and new nuclear together. 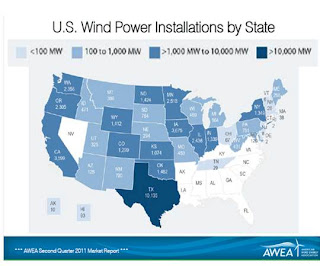 Wind produced an average 3.2 percent of the electricity between January and April 2011 and remains ahead of schedule to generate 20 percent of electricity by 2030, a goal set during the Bush Administration and based on a DOE assessment of the nation’s resources and the industry’s growth potential.

And, pointed out, an authoritative report from energy consumer advocate Mark Cooper of the showed that wind energy-generated electricity’s price, both competitive and consistent, “helps hold down overall prices for electricity” so significantly that, Cooper found, a utility would be irresponsible to its ratepayers if it did not invest in it.

In the current impecunious political climate, the 1603 program is not at the top of AWEA’s agenda. “Our focus is looking beyond that 2012 time frame,” said, “and getting the PTC extended for a longer period of time so there isn’t a cliff, a gap in policy. The industry could do a lot with a five-year extension in terms of scaling up, bringing down costs, securing that manufacturing base.”

(4) Between January and April 2011, Iowa became the first state to achieve the milestone of generating 20 percent of its electricity with wind.

The now has a cumulative installed capacity of 42,432 megawatts of wind power.