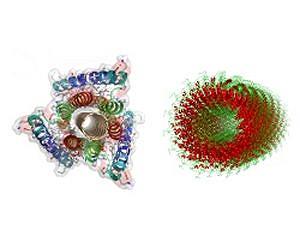 This breakthrough not only applies to plants but surely to animals.  As shown already with plants, it leads clearly to usable therapies.

A virus is a genetic modifier and that is why it works.  Here identifying the targeted gene code allows the virus to be thwarted or at least bypassed.

Even better, it can all be done without impacting on the rest of the gene’s actuvity.

This will surely lead to a flood of working protocols in medicine in particular and will possibly eliminate or control mosaic virus problems in plants.

Since plenty of viable varieties have been eliminated by this problem in the past, we may see restoration of a wide range of heirloom plants.

CSIRO plant scientists have shed light on a problem that has puzzled researchers since the first virus was discovered in 1892 - how exactly do they cause disease? 14 July 2011 In a major breakthrough that helps us better understand how viruses cause diseases in plants - and potentially in animals and humans - Dr Ming-Bo Wang and Neil Smith of CSIRO Plant Industry have revealed a genetic mechanism that enables viral organisms to infect hosts and cause diseases.

"What we found was that CMV, accompanied by a special type of viral particle called a 'satellite', causes its distinctive yellowing symptoms in plants by slicing a gene that makes chlorophyll, the green pigment in leaves. By preventing the production of chlorophyll, the virus causes the leaves to become partially or entirely yellowed which dramatically affects growth and productivity."

"Pinpointing this gene represents a major step forward in understanding exactly how some viruses cause disease symptoms in susceptible organisms," Dr Wang said.

Until recently, scientists did not fully understand why viruses only affected a small range of host organisms. This discovery shows that the accompanying satellite gene of CMV must directly match the host plant's genes to cause the yellowing disease.

When the viral satellite's genes match the host plant's genes, the satellite genes 'lock' onto and slice the host's genes, preventing the host from forming green chlorophyll pigment.
"Think of it as like doing up a zipper on your jacket - two opposing but different sections have to come together for it to work," Dr Wang said.

"So one half of the 'zipper' genes come from the virus and the other half of the genes from the host, and when they match up the virus causes disease."

This finding means researchers can focus on finding genes in viruses that match known genetic sequences in plants, and this can help to reveal the cause of diseases by other viruses.

Knowing how CMV causes symptoms, Dr Wang and Mr Smith also experimented to see if they could block the viral disease in plants. They created specially altered plants with an extra copy of the chlorophyll-producing gene. This gene had been changed so that it no longer matched the viral gene, allowing the plants to produce the green chlorophyll pigment.

Remarkably, this small change in genetic makeup prevented the plants from becoming yellow and diseased but did not change any other aspects of the plants' growth, habit or form.

This research was funded by CSIRO and the Australian Research Council (ARC) and will be presented at the International Botanical Congress in , 23-30 July 2011. Former CSIRO Plant Industry researcher Dr Andrew Eamen also contributed to these findings.