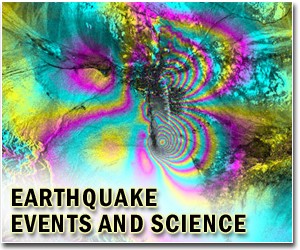 That rarest of events, an East Coast Earthquake, visited us of Tuesday.  Obviously the damage was minimal, but the strength was quite sufficient to ensure no one missed it.  I am sure the folks who got the biggest shock were in nice high towers and all learned why the buildings are designed to sway.

Another one took place over in to make it two apparently separate events.

Causation of these quakes are a bit of a mystery as we do not have the obvious geology to point to.  My best guess is that the energy source is coming from the post glacial relaxation of the North American Plate, either directly or indirectly.  At least it is a known source of energy and minor continental deformation that also generates small quakes further north from time to time.

Beyond that we are looking for deep hidden faults, but these appear to be too shallow for that.  Of course it could be simply ground settling after gas extraction but that also seems unlikely and rather too glib.  All our usual suspects are suspect themselves.  So we will have to wait for someone to figure out what plausibly triggered these quakes.

Thousands of people across the East Coast raced frantically into the streets Tuesday as an earthquake sent shock waves of the kind last seen almost exactly a decade ago on September 11.

The eastern seaboard has few larger earthquakes. Many workers were bewildered -- and feared the worst -- as their desks swayed violently and their ceilings and walls shook.
In a region days away from commemorating the trauma of the September 11, 2001 attacks, many immediately suspected terrorism as they raced down stairways to parks and street corners.

Kacie Marano, who works at a think-tank two blocks away from the White House, said that she worried that the earthquake could be something more sinister as the alarms went off and her books fell on the floor.

"Initially, I wasn't sure it was an earthquake," she said as she waited in a downtown park. "When we're so close to the White House, you always have to think whether it's an earthquake or something else."

Kassandra Meholick, who works several blocks from the US Congress, said: "I thought for sure the Capitol was bombed."

Many people in parks asked one another where they were on September 11, 2001. But unlike 10 years ago, the mood was more festive as people learned that there was little major damage.

Several bars in smelled a business opportunity and declared earthquake happy hours for residents who did not want to brave the commuter crowds -- or who were suddenly given the afternoon off.

"We have a lot of people who got half the day off and we've been busy all day," said Lauren Smith, a bartender at The Ugly Mug bar on Capitol Hill which was offering drink specials.

Many major institutions from schools to the Smithsonian museums closed for the day, some in hopes of easing pressure on commuters. Mass-transit systems around , and reported major delays, though trains ran closer to schedule in the area.

Julia Allman, an intern at an office in central Washington, was outside when the earthquake struck and suddenly saw people rushing out.

"I was thinking it could be a burglary," she said.

In , office worker Juan Ramos had another explanation.

"I saw my cup of coffee shaking, but I thought nothing of it. I had just donated blood so I thought I had not recovered my equilibrium," he said.

At magnitude 5.8, the earthquake was the largest with an epicenter in in more than 100 years.

"Just last week I was joking to someone about how we never get earthquakes here," said Kareem Webb, who works at a law firm. "At first I thought it was trees falling or something. It was a sudden shock."

His colleague Johnnie Hill, standing in the park, kept trying to reach his wife but the connections were shaky or he was sent straight to voice mail.

"It scared the hell out of me," Hill said. "And now the phone service is all clogged up."

In , a highly international city, several residents said they had felt earthquakes elsewhere. Millie Riley, an editor for children's publications, said she once felt a tremor in .

Riley said she was preparing a vegetable and salmon sandwich for herself on Tuesday when the walls started shaking.

"I work in a building next to an excavation, so I thought there might be a tragedy," she said.

Office workers were not the only ones affected. At a school for children with special needs in the suburb of , about 20 staff and families were quickly evacuated.

Several young children were visibly shaken after the three-story building was rocked by the quake, with parents and staff trying to reassure them.

Residents were warned to be on alert for aftershocks. And even barring more tremors, the East Coast is already under another threat -- Hurricane Irene is forecast to hit later this week.