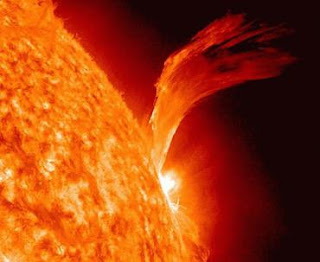 This is obviously good news.  Having a two day lead time and perhaps even a measure of intensity is going to allow detailed predictions and plausible defensive protocols that do not demand crash stop capability.  One really likes to be able to shut things down slowly when the big one erupts and two days is a darn good start.

It is hard to believe we will get that much better than this but one never says never.

It will still take a few years to both fully model and understand the apparent system and further time to fully exploit this knowledge, but we are well on the way to having an excellent space weather system in place.

This image provided by NASA shows a solar flare just as sunspot 1105 was turning away from Earth on Sept. 8, 2010 the active region erupted, producing a solar flare and a fantastic prominence. The eruption also hurled a bright coronal mass ejection into space. The eruption was not directed toward any planets.

Stanford physicists probing the sun's deep interior have predicted the emergence of sunspots on the surface a full two days before they appear, providing the first early warning of the violent solar storms that can endanger astronauts in space, disrupt electric power grids on Earth, and plunge cities into darkness.

Erupting sunspot regions release immensely powerful blasts of X-rays and clouds of ionized gases in two forms that speed toward Earth at millions of miles per hour.

Solar flares, moving at the speed of light, can intensify high-frequency radio communications and generate the shimmering northern lights - the aurora borealis.

One such event in 1989 disrupted a Canadian power grid so badly that circuit breakers tripped all over , and much of the province was blacked out for nine hours.

Until now, space weather forecasters have been able to warn power companies, airlines, NASA and others to prepare only when the sunspots and the ensuing solar storms occurred.

"It's long been our hope to see the storms of sunspots before they show up," Hathaway said.

The experiments that led to today's report in the Journal Science were conducted by Stathis Ilonidis, a graduate student in physics at Stanford, and his colleagues. Analyzing signals from a satellite peering at the sun, they detected the acoustic signs of four electromagnetic storms that were being generated as turbulence 40,000 miles deep in what Ilonidis calls "the roaring ocean" of the sun's interior.

His calculations showed that the sunspots raced upward from storm centers in the sun's deep interior at speeds of more than 1,300 mph, Ilonidis reported. Within one to two days those bursts, churning the sun's interior like earthquakes, emerged as wide sunspot regions on the surface, he said. It was, in effect, an achievement in what solar physicists call helioseismology.

In each case, the physicists said they measured the time it took for the storms to emerge as sunspots. The method, they said, could provide time for forecasters to issue early warnings that episodes of bad space weather were coming, but it first will have to be refined and proved.

The scientists gathered their observations primarily from a satellite named the Solar and Heliospheric Observatory - that has been flying for 15 years as a joint project of NASA and the European Space Agency. The satellite orbits around a point in space a million miles out between Earth and the sun, where the gravity of each body cancels out the other and keeps the craft on a stable path. Another NASA satellite, the Solar Dynamics Observatory, also provided data for one sunspot detection.

Ilonidis, who has been working on the project alongside solar physicists Junwei Zhao and Alexander Kosovichev for 10 years, predicted sunspots and the "minor to strong" solar storms that followed events retrospectively in 1996 and 1998, and in real time to one in 2003 and most recently last Feb. 12, they said.

Government solar scientists not involved in the Stanford work were quick to praise it.

Joseph Kunches, at the Space Weather Prediction Center of the National Oceanic and Atmospheric Administration in Boulder, Colo., called the report "very promising," and said if it proves that sunspots can be predicted regularly, the Stanford team's work will be a major advance.

E-mail David Perlman at dperlman@sfchronicle.com.
Posted by arclein at 12:01 AM