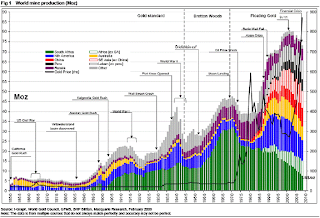 The startling surprise is that a ten year sustained gold bull market has not been sufficient to shift the growth in production upward at all.  During the same period, half the world’s population is increasing its purchasing power at the effective rate of twice that of the growth in gold supply.  However you play with the numbers, the reality is that the retail gold market has become far larger and deeper during this time and that has allowed central bank holdings worldwide to become unwound.

I would say that above ground holdings are now no longer available to make up any shortfalls.  The same thing has happened to silver when the overhang from the photographic industry evaporated in the last decade.

Quite simply, a global population of seven billion consumers will all reach purchasing parity over the next thirty years easily outstripping the industry’s capacity to supply new gold as it has been doing over the past decade.

These numbers tell us that the mining industry will be shifting to a much higher gold price structure over the next decade as this all unfolds.

As an old mining hand, I know just how difficult it is to establish meaningful reserves in gold.  We are already leaching nearly barren rock for a few dollars worth of gold.  We are not likely to be able to lower the cut off grade by twenty percent in order to increase minable tonnage ten fold on a ten fold increase in throughput as we are actually doing in the copper industry.

The fact remains that we once again need a technological breakthrough that releases p[previously unrecognized gold into the market or a surprise geological discovery that breaks previous records.  That is actually possible except it is also self limiting in time.

We are bullish on gold. Most market commentary on gold has centred on the direction of US dollar movements or inflation/deflation issues. We go beyond this to examine future mine supply, which we think is just as important a driver. Our comprehensive study of 375 gold projects supply suggests a very limited production growth profile for the next five years. A ten-year bull market in gold has done little to drive gold production. The gold miners are running to stand still. A lack of funding from equity markets and a shortage of large gold mines makes it difficult for the industry to compensate for the depletion caused by aging mines and falling grades. In our base case, our 375-mine supply model shows net production growth of 3.6% pa. over the next five years.

Our IRR analysis shows that for the major gold projects under construction, for which the acquisition cost of gold resources has already been spent, the gold price would need to be US$1,400/oz in order to generate a 20% IRR, which is usually the minimum return requirement. For projects going forward, the gold price would need to be nearly US$2,000/oz to produce an IRR of 20%. We believe this daunting hurdle will likely further delay gold production. The limited supply comes at a time when central banks have completely changed their tune on selling down their gold stocks and now appear likely to accelerate their net buying programmes. is way behind the curve. Currently, only 1.8% of China’s foreign exchange reserves is in gold; if the country were to bring this proportion in line with the global average of 11%, it would have to buy 6,000 more tonnes of gold, equivalent to more than 2 years of gold production.

We believe that these factors – limited gold production, buying by central banks and increasing demand from India and China – can potentially drive the gold price to US$5,000/oz, as highlighted in our commodity team’s earlier report, Gold – Super-cycle to extend above US$2,100/oz (17 April 2011).

We believe the best ways to invest in the gold cycle are buying physical gold (a safe asset) or investing in junior gold miners (highest leverage to the gold price) that are 1-2 years away from production. We are cautious about the gold majors. Project plans of the big five gold producers by market cap suggest an average production CAGR of only 4% in the next five years. They need to depend on expensive acquisitions in order to grow further. As a form of affirmation, the share price index we constructed for the gold majors underperformed the gold price by 147ppt over 1995-2011.

 There are very few large gold mines commencing operations in the next five years. Only seven gold mines (green or brownfield) and one copper/gold mines (the Oyu Tolgoi Mine in ) are capable of adding a total of more than 500koz gold production over the entire period of 2011-15.

 Our analysis of the major gold projects shows they can generate an IRR of 19% at the longterm gold price of US$1,400/oz, below the gold companies’ IRR of at least 20%. For
greenfield projects going forward, the gold price needs to be nearly US$2,000/oz to produce a 20% IRR.

 From our analysis, the regions that could contribute the most to gold mine production growth are Asia (29% of total five-year global volume growth), Africa (23%), North America (17% mainly ) and (12%).

 The average grade (weighted by resource size) of the gold mines in our database is
3.5g/tonne, which reflects the grade of the gold reserves. The resource grade is typically
lower than the reserve grade.

We conclude that gold production growth will be limited, which will continue to fuel the gold cycle.

We believe demand will be driven by continued growth in per capita GDP in and , a weak US dollar and high inflation, which have fuelled doubt in the creditability of paper currency.

Ironically, central banks, which collectively had been net buyers of gold until 2010, would also be a powerful force driving gold demand.
Posted by arclein at 12:01 AM

waite for the one who is constantly reminding you how he cares a bout
you & how much lucky he's to HAVE YOU.
Cheap Tera Gold