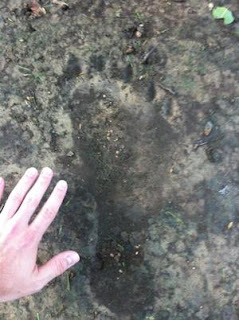 This is a fairly common type of report although the animal is not actually seen.

What are important are several things;

The existence of claws on the feet has never been reported before that I am aware of and should be discounted until we have supporting evidence.

The interest in apples and the desire to trade needs to be followed up on.  Apples were used in an attempt in the northwest to encounter the animal with some success.

I would suggest setting out a bushel of apples.  If a gift is provided, then repeat the process.  This may work to build trust and gain film time.

This is clearly a very intelligent animal that we need to respect.

By the way it takes enormous strength to pull the head of a rabbit. This needed strength in the range expected from a Sasquatch.  Certainly it is outside the range of any hoaxer.

residents wonder if Bigfoot is around

The footprint measured approximately 18 inches long and eight inches wide according to the Chatham Police Department report. The immense size of the print isn't fully appreciated until a hand is placed beside it.

Lately there’s been talk around certain areas of town of an unusual howling and screeching sound, as well as some very large footprints found.


Since June there have been five or six instances of residents discovering or hearing things that have them thinking Bigfoot may be lurking somewhere in Chatham.


One case in particular has garnered some attention from local police, as well as a few proclaimed experts on the legendary creature.


On June 15, Michael Patrick’s mother was getting the liner to her pool changed at her residence, when workmen noticed an abnormally large footprint under the apple tree in the back yard and brought the footprint to Patrick’s attention.


Over the years Patrick and his mother had, at times, heard bizarre noises, but had always passed them off as coming from some common forest animal. But they weren’t the only ones that had heard the sounds either. The night before the footprint was found a neighbor had also commented about unusual sounds.


“My neighbor has a German shepherd, and it heard something that night that spooked him. The dog went outside to investigate, but came back cowering, now it won’t leave its owner’s side,” Patrick said.


Unsure about what exactly the footprint was, and concerned for his mother’s safety, Patrick called the Chatham Police Department. An officer came to investigate the scene, but was unable to determine what might have caused the print.


“The responding officer stated that there was a large footprint approximately 18 inches long and 8 inches wide, and it appeared there were five claw marks,” Chatham Police Department Deputy Chief Vernon Foli said.


To give you an idea of how big 18 inches is, retired NBA center Shaquille O’Neil’s feet are approximately 15 inches long, and he wears a size 23 shoe. The average human being’s foot measures approximately 9½ inches. Most shoe size charts end at a size 15 shoe. An 18-inch footprint is about the size of a healthy newborn baby.


Patrick documented his discovery on Facebook where he struck up a conversation with a friend.


Courtney has documented sightings and gathered sound recordings and evidence of Bigfoot for years. He has interviewed more than 200 witnesses who have seen Bigfoot.


“I literally know hundreds of people who’ve seen these animals. There have been lots of them in central . I’ve recorded lots of sounds that other researchers and witnesses believe come from these animals. People in don’t realize it, but there have been a lot of reports from the around Riverton.” Courtney said in a previous interview.


Courtney said that there have been five to six other reports of finding footprints and howling in the area since June.


So why is Bigfoot in ? Well it’s hard to say really. Patrick’s property does back up to a wooded stream which flows into . Courtney proposed that the creature was drawn to the house because of the apple tree that grows in Patrick’s mother’s back yard.


Stan Courtney explained to Patrick that the apple tree might have somehow been interpreted as a gift of food. In the past the Patrick’s had noticed that apples from the tree had been picked, but only to a certain height. They believed that the culprit was a wily raccoon, but the large footprint seemed to suggest otherwise. Courtney told Patrick that a creature such a Bigfoot will usually return the favor, and present a gift of its own as a show of appreciation in the form of a dead animal or a strange arrangement of flowers.

The day after his meeting with Courtney, Patrick discovered a decapitated rabbit near his mother’s house. In Courtney’s account he stated that the rabbit had, “its head pulled off, not bitten or cut, but just simply pulled off.”


Since that strange June evening, no more incidents have occurred at Patrick’s mother’s residence. You might think that such a strange series of events would frighten most people into staying out of the back yard, but the occurrence has not deterred Patrick’s mother from going about her normal routine.


“She’s not scared, she continues to do her yard work. She thinks it’s neat. My mom has never been skeptical of it,” Patrick said.


While his mother may not be skeptical of what happened, others aren’t ready to pin the event on Bigfoot just yet. Foli posed a possible explanation, albeit an indirect one.

“One thing I can tell you is that approximately ½ mile south of this location is the former Zoo that use to have exotic animals. The zoo is no longer in existence but the owner is Brad or Larry Reynolds and he still has some animals at this location,” Foli said.


Could the print have come from an animal from the old zoo? The Reynolds had kept large animals such as buffalo, antelope, elk, deer, tigers, leopards, monkeys, and zebras while the zoo was open. Or could it be a bear footprint? It’s widely believed by many that there are no bears in , but with their presence in neighboring states, and , would it be so far fetched to think that there are indeed bears in ?


At this point it’s hard to tell what exactly made the footprint, but with other accounts of strange happenings and unusual howls and screeches in , many residents are raising an eyebrow.


“I definitely don’t think it was a hoax, and it was more than just a coincidence. I think that people should just be a bit more vigilant and careful, because you never know what you’re going to find out there,” Patrick said.