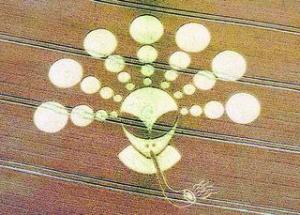 The music continues and we now are given the type of mischievous art work one can expect from aircrew.

As I have posted before these images are produced by making six inch pixels with a powerful military microwave laser that is computer managed.  One can even trace the increasing capabilities of modern computer technology from the history of the images.

It is a long standing research project that was recently demonstrated by the shooting down a missile from a large aircraft.

There is utterly no need to introduce a magic alien into the Top Secret story.  We can do it all ourselves and should be shot if we had not managed this trick.

In the meantime, the press continues to buy into the disinformation campaign thrown around all this.

HUNDREDS of people from all over descended on the Cherhill white horse after a mysterious crop circle – featuring an alien smoking a pipe – appeared in a corn field below the monument.

The bizarre creation appeared in the early hours of Wednesday last week.

Since then, enthusiasts have travelled from as far away as the , , Scandinavia and to see it.

Theo Wierdsma, a Dutch primary school manager, who also lectures in crop circles and phenomena research, travelled to with his 21-year-old son Justin to look at the many crop circles in the West Country.

Mr Wierdsma, 55, said: “I have been coming over to every summer for the past eight years to look at crop circles.

“I don’t know if this one might be a hoax but I think from looking at the shape of it that it is a real one. I have thought they were a hoax before and was wrong so it is very interesting.”

Local small aircraft clubs have been assisting the tourists by taking them above the crop circle in planes and microlights to film and take photos of the phenomenon.

The farmer has also allowed them to go inside the circle to do tests and take pictures.

Mr Wierdsma said he will stay in Wiltshire for another week to study other crop circles.

He added: “Next spring we will see for sure if this was a hoax or not because, if it is real, there will be a ghost of it still in the crop.

“I have seen some amazing things in my time and this is one of them.

“I think there is a big magnetic field around it and we have sensed some radioactivity in the air.

“After eight years of doing this, I don’t believe it is people making these, it is alien activity.”