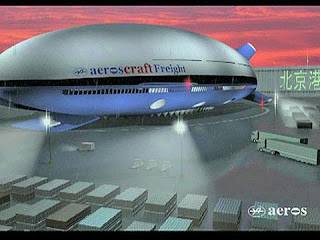 It appears that there is now a rush on by all the major manufacturers and a couple of private vendors at the least to get modern airships flying.  Quite simply modern materials allow us to achieve the scales necessary.

The craft here will be 75 by 30 meters and it is the prototype.  It is reasonable to think that doubling those dimensions are possible and this would increase capacity eight fold and allow a 400 ton capacity or sufficient to carry four shipping containers.

With that in place, the airship is directly competitive with the long haul trucking industry, rail transport and deep sea shipping.  I also think the cost will quickly drop to sharply expand the demand for the service.

Initially though I see plenty of outright charter business simply moving fresh produce directly from the farm processing plant to the urban distribution facility and avoiding thousands of miles of movement vibration that degrades the product.

The promoters talk about accessing remote sites, but the paying business will be charters like that.  So expect to be seeing these passing over daily in the not so distant future.

An artist's version of the new flying ship, Aeroscraft, from company Aeros Corporation that is being built outside of with funding from the Defense Department

A company is developing a new type of airship for transporting cargo and, possibly, passengers.  It is not an airplane and not a blimp, but has elements of both.  The vehicle uses new technology and has commercial and military applications.

The new flying ship from the Aeros Corporation is called an Aeroscraft, and is designed to carry more than 50 tons of cargo and make deliveries thousands of kilometers away.

A demonstration model is being built outside , with funding from the Defense Department.  It's in a hangar the Navy once used for its helium-gas-filled surveillance blimps.  The test vehicle is 75 meters long and 30 meters wide, and should be ready to fly late next year.


Edward Pevzner of Aeros says it will get to hard-to-reach places.


"[This vehicle is ideal for] the north of Canada, Alaska, where big oil and gas exploration is going on, same as the Amazon region, or the continent of Africa, which is very poorly developed," said Pevzner.


Aeronautical engineer Tim Kenny says the key to the system is a new technology that allows the craft to go up or down without removing or adding weight, as is required on conventional airships.  Unlike blimps, this craft requires no ground crew.  And unlike blimps, it is not always lighter than air.  Kenny says it is sometimes lighter and sometimes heavier than the air around it.


"The whole shape will be filled with helium throughout the whole vehicle, and then internal to that, we'll have the variable buoyancy system," Kenny explained.


The helium provides lift for the craft to go up, and when the helium is compressed, the craft loses its buoyancy and can land.  Control and propulsion are provided by propeller-engines powered by aviation fuel.  Kenny says the craft's light weight and rigid structure are made possible by new technology.


"Advancements in composites have really motivated and moved this industry a lot farther along," Kenny noted.  "They're able to combine composites to aluminum and build lightweight structural components."


The demonstration model should fly by late next year.  If it works as planned, even bigger versions may be on the market in a few years.


The military is interested in the ship's potential.  So is industry.  Commercial applications include moving turbines to hard-to-reach wind farms that generate electric power.  The company says once the ships have proved their mettle hauling cargo, modified versions could also be built to ferry passengers.

If a reader were to look into the reasons why these airships where replaced with airplanes after what happened in New Jersey, then you would understand again how big oil has destroyed another great invention, just so a handful of creeps could make billions off of the backs of others. I would like to see this work and for them to make ones for passengers to cross the world in. Look up about the ones the German's had built before WW2 to get an idea about how these things could be better then being on a cruise ship.