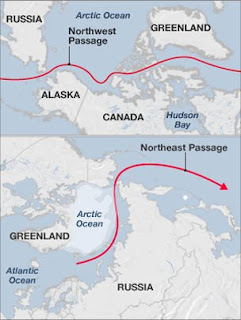 This year both passages are open and this is no longer exceptional.  In fact this year there was no special circumstances that I am aware of as was the case in 2007 when the winds actually concentrated the ice.  Today a lot less ice is now covering the same area as 2007.  A return of the 2007 wind regime would have produced a dramatic reduction in area this year.

In fact over the past five years we have continued to lose ice at much the same pace contrary to what the navy has been reporting from submarine work.  I hate throwing their data away, but in the end our eyes are saying something else altogether.

I do not think we have reached a natural minimum as yet, but I do think we are rather close.

Back in 2007, I predicted that we would possibly hit that bottom by 2012.  We are actually doing pretty well.  The rotation of the gyre keeps ice around for about three years at most.  Thus the present low for multi year ice needs to be understood.  Does it even properly exist at present?

The sea ice is breaking up enough to ensure little sea ice will succeed in making two trips around the gyre.  The scientific question today is to determine just how much.

The good news is that such broken up ice could be navigated with huge air cushioned ships which have the capacity to lift and shatter any ice in its path.  Large ships so configured could traverse such an icy sea even in winter as the maximum strength would be a few feet rather than tens of feet acquired over years.

Obviously the passages are essentially open for some traffic.

This summer's melt could break the 2007 record for the smallest area of sea ice since the satellite era began in 1979.

Shipping companies are already eyeing the benefits these routes may bring if they remain open regularly.

The two lanes have been used by a number of small craft several times in recent years.

But the has been free enough of ice this month for a succession of tankers carrying natural gas condensate from the northern of to sail along the Siberian coast en route for .

"They're often open at the same time in the sense that with some ingenuity you can get through them," observed Peter Wadhams, an Arctic ice expert from the .

"But this time they've really been open, with a proper Suez-size tanker going through the Northern Sea Route with a full cargo - that's a real step forward," he told BBC News.

A number of major shipping companies are looking to the opening of these routes to shorten journey times and make their businesses more efficient.

But environmental groups are concerned that the progressive ice loss will lead to increased exploration for oil and gas.

This, they argue, presents major safety hazards in the often inclement Arctic, as well as strengthening the world's reliance on fossil fuels and so ensuring the progression of man-made global warming - and the disintegration of summer sea ice cover.

The Arctic sea ice has been melting fast this year, and for a while it appeared set to break the 2007 record for the smallest minimum area in the satellite record.

However, in recent weeks it has been running a narrow second to 2007.

"The minimum ice extent is still three to four weeks away, and a lot depends on the weather conditions over the during those weeks," said Leif Toudal Pedersen, senior scientist at the Danish Meteorological Institute.

"Whether we reach an absolute minimum or not, this year again confirms that we are in a new regime with substantially less summer ice than before.

"The last five summers are the five minimum ice extent summers on record."
The volume of sea ice continues to decline annually.

Professor Wadhams believes the advent of summers where the two sea routes are routinely open is not far away.

"The is probably the less reliable becaise you've got so many small passages in it where chance variations in wind will pile ice up and block it," he said.

"But so long as the ice retreats from the coast of , you'll have a route there."

Some computer models forecast that the could be completely clear of summer sea ice within a decade, though others recently published say there may be high years and low years en route to the final disappearance.

and are among the governments jockeying for position as new areas of the seabed open up for exploitation.