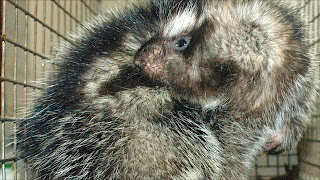 What I find completely astonishing is that the animal has learned to apply a profoundly complex strategy to preserve itself.  This is not an accident or even simple tool use like throwing a stone accurately.  It is something only humanity would be expected to dream up and implement.  Its only comparable is surely the beaver which also shows amazingly complex behavior not readily put together by accident.

The actual adaptation of the fur itself is even more surprising.

This all is best explained by bio engineering in the distant past, unless someone wishes to fabricate an alternative for us.  At some point it is necessary to actually throw up your hands and accept the impossibility of an extremely clever rodent who invented and marketed a new survival tool. 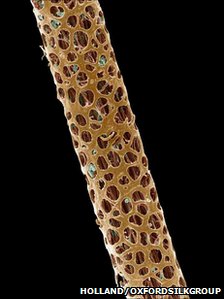 They found that the African crested rat chews the roots and bark of a highly toxic tree, and then smears the lethal mixture on its specially adapted fur.

Any animals that attack receive a mouthful of potentially deadly poison.\

It is the first time that this behaviour has been reported in a mammal, the researchers write in the Proceedings of the Royal Society B.

Jonathan Kingdon, lead author of the paper, from the University of Oxford, said: "The need to deter predators has led to one of the most extraordinary defences known in the animal kingdom."

But the team, from the , and , are still puzzled by how the rodent is able to survive a dose of the toxin, which comes from the poison arrow tree (Acokanthera schimperi).

Traditionally, this poison has been used by hunters to kill elephants.

The African crested rat (Lophiomys imhausi) is found in the north east of continent, and has long been thought to be poisonous: there have been several reports of domestic dogs that have dropped dead after trying to bite one.

But until now, nobody realised that it employed the help of a plant to make itself deadly.
When undeterred by predators, the rodent looks like a long-haired, grey rat.

However, when it is under attack from animals such as jackals, wild cats and leopards, it does not run off as it is extremely slow. Instead, it freezes, and then exposes a bold, black-and-white-striped tract of hairs that run down its flank - and it is this fur that is slathered in poison.

Professor Kingdon said: "The poison is an organic poison. We all have minute quantities of it in our bodies, and it controls the strength of the heart beat.

"But if you have too much, your heart beats so hard that you have a heart attack.

"It is the source of the deadly arrow poison that is used to kill elephants."

Closer analysis revealed that these hairs on the rat's flank have an unusual structure.

Professor Kingdon said: "It is of a structure that is completely unprecedented in any other animal. There is not another animal that has hairs shaped like the hairs on that tract."
Microscopy showed that the hairs on its back draw up the poison much like the wick of a candle, ensuring that each hair remains saturated with as large a dose of poison as possible.

Microscopy revealed that the hair could "wick up" the poison

The rest of the rat's hairs have a more typical mammalian structure. The researchers noted that it does not apply the poison to these - only to its crest.

The team thinks that the elaborate display is enticing predators to bite the rat's most poison-laden spot.

"As the predator rushes in and tries to make its first bite, the rat ensures the flank is the first thing the predator encounters: it advertises this visually with its colouring," explained Professor Kingdon.

The tactic seems successful: if the predator does not die from their toxic encounter, it is unlikely to ever want to take a bite of the rat again.

The only animal, said Professor Kingdon, that uses a similar trick is the hedgehog. The prickly beast will sometimes kill a toad and bite into its glands, then smear this toxic mixture on its spikes.

However, the poison seems to boost any discomfort its spikes might cause, rather than have a lethal effect on its predator.

The researchers now want to find out more about this unusual evolutionary relationship between predator, plant and prey.

They are also keen to discover how and why this rat is able to withstand this poison when so many other animals cannot.

The team said this could have interesting medical implications.

Isolating the part of the poison that helps the heart beat and identifying the physiological components of the rat that prevents it from dying could help to lead to novel treatments for heart problems.

Every time a bird brain biologist discovers something new under their nose it instantly becomes another important flyspec. Those of us who are engineering types have long ago admitted that we are ignorant of more than we know.

First Mars had canals and water. Then it was dry and lifeless. Now we realize it is neither. And that is what you call honest scientific progress. I am sure that in a few million years of trial and death/survival by error/luck even without any intelligent purpose creatures can and would eventually figure stuff like this out and then pass it on via a combination of genetics and monkey see / monkey do.

But that conclusion wouldn't make the news or get you research grants.