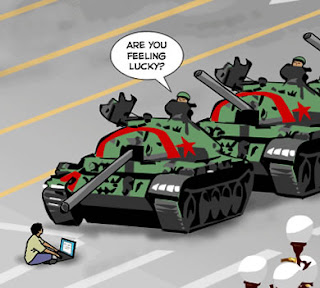 Without question web censorship has gone on too long without been challenged..  Now it has been shown that it can be challenged and the present one way street can be turned on its head.

It is amusing that this blog, which is hosted on Google’s blogspot service rarely gets a hit from .  That means of course, that this blog is an almost perfect security zone for secrets not to be revealed to .

I think that it has been long since been shown that the free flow of information is wonderful at burying most real information in a cloud of noise.  There is virtually no need to file a patent anymore.  Just publish it on the front page.  That means no one else can patent the idea and the patentor remains the known expert and can still sue abusers if he likes to prevent someone from using his knowhow.  I have actually done just that on this blog for that exact reason.  That way no one can ever sue me for using my own discoveries and that is good enough.

I think that there is an excellent chance that this is going to be picked up on.  has long abused the trust given it on a number of such issues and it is high time that the veil was ripped away over their nonsense.

How the West is arming the anti-censorship movement

In the high-stakes cyber struggle to outwit repressive regimes – such as China’s – that spend billions thwarting the free flow of information, a Canada-U.S. computer research group believes it can tip the balance toward freedom.

“The bad guys have lots of tools,” said Ian Goldberg, an assistant professor at the of ’s of Computer Science.

A math genius, who won international acclaim while still in high school, Prof. Goldberg’s prowess as a cryptographer gained fame in cyberspace when he cracked Netscape’s supposedly unbreakable encryption. Now he is part of team that has come up with an anti-censorship system called Telex.

“With this technology, we are trying to give the anti-censorship movement some better tools,” he said.

Until a few days ago, when the joint of and of team announced their Telex test running inside a computer lab in ’s cyber police may not have known there was a chink in their cyber wall.

“I guess this will wake the Chinese up,” said Prof. Goldberg, 38, just before he presented the software counterpunch at USENIX Security Symposium in on Friday.

If Telex works as envisioned and if the major funding is found to massively scale it up to thousands of specially equipped servers that can detect and redirect requests to supposedly blocked websites, then it could lift the cyber curtain imposed by China and some other states.

As part of their testing, users in Beijing who installed an innocuous bit of software that alerts Telex servers have successfully reached YouTube – one of the tens of thousands of sites that are deemed dangerous or subversive by Beijing’s cyber police and are thus blocked. Most Western news sites and all even vaguely dissident offshore Chinese sites also are blocked.

“We think that anti-censorship technology is a force for good in the world,” Prof. Goldberg said. “Funding this will help freedom.”

So far, Telex is little more than a concept. Many, perhaps thousands, of Telex-equipped servers would need to be installed. In short, nations, not just companies, would need to gang up to beat the censors. Mr. Goldberg hopes for State Department funding.

To work, it will require “support from nations that are friendly to the cause of a free and open Internet,” said Alex Halderman, assistant professor of computer science and engineering at the and another of Telex’s developers.

“We believe it has the potential to shift the balance of power in the censorship arms race,” he said.

To outwit the censors, an Internet user in a state that blocks or censors access, needs to install a small tag or key. Then the user makes a seemingly innocuous request to a normally unblocked site. “Since the connection looks normal, the censor allows it, but this connection is only a decoy,” the developers said. Once the apparently benign request reaches a Telex-equipped server, it detects the hidden tag and redirects the request to the “banned” site.

Mr. Goldberg acknowledges that the scheme might also be misused; for instance, to cloak illicit sites. But authorities in Western states – where presumably Telex servers would be located – would still be able to require Internet service providers to disclose the real locations and identity of sites cloaked to fool foreign censors.