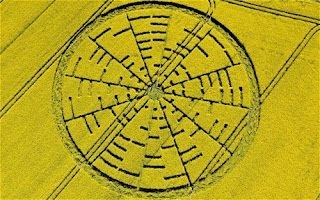 Having posted an explanation that largely conforms to these recent comments, it is welcome to see myself been joined in understanding that the mechanism is microwaves.  I went much further and pointed out that this was likely done from a high elevation high powered microwave laser with computer controlled targeting such as has been demonstrated for shooting down missiles by the USAF.

All the evidence and the chronology conforms to just that explanation.  At least we are now seeing the capability been demonstrated.

Curiously, it is plausible that the actual reason for the crop circles is the desire of the military to initiate communications with UFOs or at least demonstrate our capability to them.  Otherwise why actually bother with all the noise produced?  A firing range properly obscured would do as well.

At this point I am certain this is all part of a major defense initiative with all the usual disinformation that goes with that to keep the curious confused.  See my earlier posts by googling on this blog for ‘crop circles’

Crop circles are now made using lasers, microwaves and GPS technology to create ever larger and more elaborate patterns, scientist claims as days of using planks and rope long gone

Other theories of how the patterns have appeared over the centuries include freak wind patterns, rolling hedgehogs, copulating couples and, in a 1678 report, the actions of a "mowing devil" Photo: REX

Crop circles have confounded farmers and scientists alike since they were first recorded in the 17th century, and now physicist Professor Richard Taylor says the phenomenon is growing alongside advances in technology.

The complexity of modern patterns, which can involve up to 2,000 individual and elaborately arranged shapes, suggest that clandestine groups of hoaxers must use sophisticated methods to complete their projects in a single night.

GPS systems enables the artists to cover vast spaces with absolute precision, while microwaves can be used to flatten large numbers of stalks at great speeds, it was claimed.

An analysis of evidence in the Physics World journal reported that researchers had used magnetrons – tubes which use electricity and magnetism to generate intense heat – to mimic the physical changes in flattened stalks in some circles, which are linked to radiation.

Prof Taylor, director of the Materials Science Institute at the , said the findings suggest that crop circle artists may be using magnetrons, found in microwave ovens, or similar technology to complete their detailed patterns in the space of a few hours.

Traditionally planks of wood known as "stompers" and lengths of rope have been used to make accurate patterns in fields, with designers even using bar stools to hop from one flattened section to another.

Other theories of how the patterns appeared over the centuries include freak wind patterns, rolling hedgehogs, copulating couples and, in a 1678 report, the actions of a "mowing devil".

More recently, conspiracy theorists have linked the patterns to UFOs or other alien activity, though some hoaxers have admitted to deliberately imitating flying saucer "nests".

More than 10,000 examples have been documented in the past 500 years, with one new pattern now appearing somewhere in the world every summer evening.

Prof Taylor said: “Crop-circle artists are not going to give up their secrets easily. This summer, unknown artists will venture into the countryside close to your homes and carry out their craft, safe in the knowledge that they are continuing the legacy of the most science-oriented art movement in history.”

Matin Durrani, Editor of Physics World, said: “It may seem odd for a physicist such as to be studying crop circles, but then he is merely trying to act like any good scientist – examining the evidence for the design and construction of crop circles without getting carried away by the sideshow of UFOs, hoaxes and aliens.”
Posted by arclein at 12:01 AM