T Rex of the Sea in Manitoba 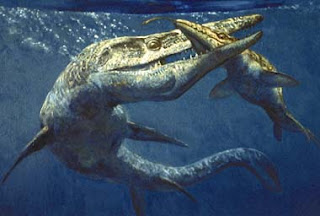 It seems that a site in is a trove for mosasaurs.  That they disappeared at all tells us pretty clearly just how awful even sea conditions were when the extinction event took place.  They had the ability to travel and rely on the sea itself and they still did not make it.

These fossils are in the Tethys sea which was extraordinarily warm and may well have added to their vulnerability during such an event.  Of course specimens from clearly colder waters would alter that argument.  It is a field that invites such questions although it will take decades to clarify many such ideas.

I have seen evidence of refugia survivals out of to as recently as the end of the Ice Age so survival was at least possible in at least one locale.  More recent survivals appear unlikely but I have also shown in certain situations that it is not impossible.

However, a mosasaur is pretty hard to hide so that appears rather unlikely.

T-Rex of the sea unearthed in Manitoba

Scientists from the Canadian Fossil Discovery Centre in , have dug up two mosasaurs, a huge reptile known as the "T-Rex of the sea."

The dig site in southern also uncovered a prehistoric squid and bird fossils, giving scientists new insight into what looked like 80 million years ago.
The area has a rich history of offering up ancient sea creature fossils.

The discovery centre is already home to a 13-metre-long mosasaur fossil named Bruce, found in 1974 near A full-scale reproduction of him is on display in the centre's museum.

In 2004, the remains of a mosasaur nicknamed Betsy were first found. Ongoing work recently revealed the back of the skull.

In 2006, pieces of another mosasaur were discovered during a school dig by participants from the town of . The specimen, nicknamed MacGregor, includes a jaw fragment, a vertebra and a rib fragment.

And in 2008, another specimen, an 11-metre-long mosasaur nicknamed Angus, was found just north of where Bruce was located. It is still being excavated.

In 2010, crews unearthed yet another mosasaur. They returned to the site this summer and during the excavation process they uncovered the latest one.

Mosasaurs were air-breathing, scaly skinned, flesh-eating lizards that swam in an inland sea during the Cretaceous Period, between 65 million and 135 million years ago, centre officials said. While they resemble modern alligators, the monitor lizard of Asia and is considered its closest living relative.

They were named after the in , near where the first mosasaur discoveries were made.

Curator Anita Janzic said the new find is significant because the discovery of some shore bird fossils seems to contradict the idea that much of the Prairies was under water at the time.

She said they expect to keep working at the southwestern dig site for several years and will write up their findings for academic journals.

"We are finding layer upon layer of exciting fossil discoveries,” she said, adding it is amazing how one small dig site is producing such an abundance of diverse fossils.

The excavation also has geologists buzzing about the appearance of a previously unseen rock layer for southern .

“This dig site is showcasing the most exciting five inches of rock that I’ve ever witnessed,” said assistant curator Joseph Hatcher.

“This small layer of rocks is suggesting a rapid change in the paleoecology and environment of prehistoric . There is great science emerging from this dig site that has our team very excited."