From Worm to Man 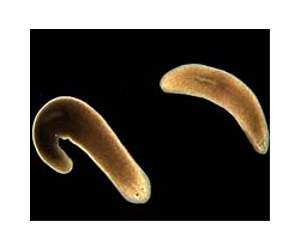 The take home is that our kidneys evolved long before life split into vertebras and moulters.  It also means that work on flatworms will led to direct regeneration of some organs ate least.  Recall the liver does so anyway.  Thus extending that capability for some organs at least seems appears plausible.

Replacing organs naturally or artificially are both emerging protocols that we will soon be seeing a lot more about.  It is surely happening.

I would like to see medical research literally throw away the regulatory governors for one decade.  We now know vastly more about fundamental processes so that we can hugely control any damage although losses will occur.  It will still payback in lives saved.

Regulating research has always been a bad deal and it is now dumb.

From worm to man

Our bodies are perfectly capable of renewing billions of cells every day but fail miserably when it comes to replacing damaged organs such as kidneys. Using the flatworm Schmidtea mediterranea-famous for its capacity to regrow complete animals from minuscule flecks of tissue-as an eloquent example, researchers at the Stowers Institute for Medical Research demonstrated how our distant evolutionary cousins regenerate their excretory systems from scratch.

In the process, the Stowers team led by Howard Hughes Medical Institute and Stowers investigator Alejandro Sanchez Alvarado, Ph.D., not only established flatworms as a valuable model system to study tissue maintenance and organ regeneration but also provided new clues about the evolutionary origin of mammalian kidneys. Their study is published in the current issue of the journal Development.

"The past ten years of planaria research have shown that planarians use pretty much the same molecular toolkit for building their bodies as other animals," says first author Jochen Rink, Ph.D., formerly a postdoctoral researcher in the Sanchez lab and now a group leader at the Max-Planck-Institute of Molecular Cell Biology and Genetics in Dresden, Germany.

"Because of this fundamental similarity between all animals, understanding how a worm assembles its excretory system may very well be relevant to understanding kidney physiology and regeneration in humans," he adds.

Most animals studied in the lab fall within two main branches on the evolutionary tree of life: mice, rats, and salamanders are part of the vertebrate lineage, while fruit flies and the roundworm Ceanorhabditis elegans belong to the lineage encompassing molting animals.

"People have drawn conclusions about the evolution of certain attributes by looking exclusively at these two branches," says Sanchez Alvarado. "That's akin to trying to work out your family tree but ignoring your entire maternal lineage."

In contrast, flatworms, also known as planaria, are part of a branch that has been largely ignored by modern molecular biology. "The so called lophotrochozoa are an incredibly large and diverse group of animals we know very little about," explains Sanchez Alvarado.

What was known is that-unlike fruit flies and C. elegans-planaria possess very complex excretory systems akin in many respects to mammalian kidneys. "Planarian protonephridia are so far the only invertebrate model system that combines pressure filtration with filtrate modification similar to mammalian nephrons, the basic functional unit of the kidney," explains Rink. Their anatomy, however, was not well understood.

When Rink and co-first author Hanh Thi-Kim Vu, Ph.D., a graduate student in the Sanchez Alvarado lab, analyzed their structure with the help of electron microscopy, the scientists found that planarian protonephridia are complex epithelial organs that organized in a consistent and hierarchical manner: a distal tubule branching out into proximal tubules, each of which is topped by a ciliated flame cell-so named because under a microscope the beating of the cilia resembles a flickering candle.

But more importantly, they noticed that the endothelia forming the tubules are composed of a fixed succession of different cell types along their length reminiscent of the mammalian condition. "This suggests to us that the mammalian kidney originated before the branches split," says Sanchez Alvarado. "The homologous structures in fruit flies and C. elegans diversified and diverged till they no longer resembled their common ancestor."

Protonephridia are distributed throughout a flatworm's body. To study their development researchers could simply cut the animals' heads off and watch how they regrew the missing body part including excretory tubules within a week. They found that protonephridial tubules originated from a precursor structure, which undergoes extensive branching morphogenesis, the same process that also shapes vertebrate organs such as lung, kidneys or mammary glands.

When Rink interfered with the expression of EGFR5, short for epidermal growth factor receptor, during the regeneration process protonephridia could no longer undergo branching morphogenesis.

If he did the same in non-regenerating planaria, they were unable to maintain the structural integrity of their protonephridia, which told him that under normal conditions the organ is constantly maintained through cell renewal.

"We take it for granted that we go to bed with two sets of fully functional kidneys and that we wake up with them the next morning but we don't understand the fundamental processes that give rise to this very well choreographed maintenance of an organism's form and function," says Sanchez Alvarado. "We can now start to use planaria as a model to begin to understand how an adult animals maintain their form and function over a very long time."