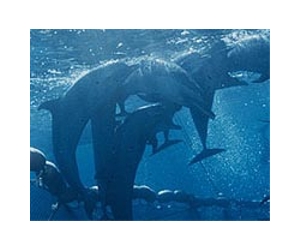 My take home speculation on the revelation that dolphin healing is hugely accelerated is that we are dealing with the benefits of marine available oxygen to the edges of the wounds.  We can presume that all sea creatures have comparable capabilities commensurate with metabolic strength.  That is not addressed in this item.

Rapid healing of burn wounds has been observed on land with the application of a gel make with a solution of bio available oxygen and also with egg white which could also contain and should contain bio available oxygen.  Such rapid healing is obviously desirable and the egg whit protocol at least should become the standard care protocol for all open wounds or even closed wounds.

It is easy enough to whisk up a bowl of egg whites and easy enough to spread it on a wound.  It should then be allowed to settle and perhaps dry slightly for say ten minutes before a second coat is applied.  This should be done for an hour to build up a fairly thick layer.  At some point thereafter, it will be obvious to apply an additional coat to remoisten it.

The fact is that fast wound healing is a standard reality in the sea.  It is also proven that it is possible using the above protocol for land animals.  The egg white protocol, since it is readily available needs to be implemented as the new standard.

A (GUMC) scientist who has previously discovered antimicrobial compounds in the skin of frogs and in the dogfish shark has now turned his attention to the remarkable wound healing abilities of dolphins.

A dolphin's ability to heal quickly from a shark bite with apparent indifference to pain, resistance to infection, hemorrhage protection, and near-restoration of normal body contour might provide insights for the care of human injuries, says Michael Zasloff, M.D., Ph.D.

For a "Letter" published in the Journal of Investigative Dermatology, Zasloff, an adjunct professor at GUMC and former Dean of Research, interviewed dolphin handlers and marine biologists from around the world, and reviewed the limited literature available about dolphin healing to offer some new observations about what he calls the "remarkable" and "mysterious" ability of dolphins to heal.

"Much about the dolphin's healing process remains unreported and poorly documented," says Zasloff. "How does the dolphin not bleed to death after a shark bite? How is it that dolphins appear not to suffer significant pain? What prevents infection of a significant injury? And how can a deep, gaping wound heal in such a way that the animal's body contour is restored? Comparable injuries in humans would be fatal. "

For example, he proposes the same diving mechanism (diving reflex) that diverts blood from the periphery of the body during a dolphin's deep plunge down in water depths also could be triggered after an injury. Less blood at the body's surface means less blood loss.
As for pain, Zasloff's review suggests the dolphin's apparent indifference "clearly represents an adaptation favorable for survival." Still, he says, the neurological and physiological mechanisms engaged to reduce pain remain unknown.

The prevention of infection is perhaps less of a mystery. Despite gaping wounds and deep flesh tears, those who observe dolphins following shark bites have not noted significant rates of infection. Zasloff says it's likely that the animal's blubber holds key answers.

Blubber and its composition have been studied extensively for many years because it accumulates many toxic pollutants of human origin, such as heavy metals from its food sources, which allows scientists to monitor environmental pollution, Zasloff says. It is therefore well documented that blubber also contains natural organohalogens which are known to have antimicrobial properties and antibiotic activity.

"It's most likely that the dolphin stores its own antimicrobial compound and releases it when an injury occurs," Zasloff predicts. "This action could control and prevent microbial infection while at the same time prevent decomposition around the animal's injury."

"The repair of a gaping wound to an appearance that is near normal requires the ability of the injured animal to knit newly formed tissues with the existing fabric of adipocytes, collagen and elastic fibers," he explains. "The dolphin's healing is similar to how mammalian fetuses are able to heal in the womb."

Brent Whitaker, M.S., D.V.M., deputy executive director for biological programs at the National Aquarium in describes Zasloff's letter as "thought provoking." Zasloff consulted with Whitaker as part of his research.

"It makes sense that the dermal tissues of the dolphins would evolve mechanisms to protect them from the microbes ever present in the water in which these animals live," Whitaker says.

"Other aquatic animals have developed protective strategies that allow them to cope with water-borne microflora. [Dr. Zasloff's] letter suggests a unique and intriguing hypothesis which may begin to explain how dolphins, and perhaps other cetaceans, survive significant soft-tissue wounds in the wild without the aid of antibiotics or clinical care."

"It is very clear from working with marine mammals that the ability to heal is 'enhanced' from what we see with terrestrial mammals," says Leigh Ann Clayton, DVM, DABVP, director of the Department of Animal Health at the National Aquarium, who also advised Zasloff. "Dr. Zasloff proposes some fascinating mechanisms of action in healing. It is exciting to begin exploring these mechanisms more completely."

In his letter, Zasloff presents the case histories of two shark-bitten dolphins, Nari and Echo, at the Tangalooma Wild Dolphin Resort in . The reports document the healing process of the dolphins with photos to eloquently demonstrate how and how quickly two dolphins heal from severe shark injuries.

"The Tangalooma dolphin care team is continuously astounded at the remarkable natural ability of the dolphins that visit us, in overcoming severe shark bite injuries with what seems to be indifference," says Trevor Hassard, director of Tangalooma.

"We learn so much from the lives of other animals. Perhaps Dr Zasloff's contribution will bring the dolphin's remarkable healing capacities to the attention of the medical research community."

"My hope is this work will stimulate research that will benefit humans," says Zasloff. "I feel reasonably certain that within this animal's healing wounds we will find novel antimicrobial agents as well as potent analgesic compounds.