End of An Arab Dictator 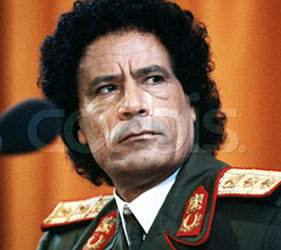 He did go down fighting to the end and showed every dictator in the world the actual futility of resisting the aroused will of the people.  We had already learned this in when the most organized states of oppression fell.  Then no dictator had thought it even possible.

Today we know better and now the Arab world also knows better.  Five long standing Arab dictatorships are today all states in transition.  The ones that are still ruled by monarchies of some sort have all been shaken but have survived for now, but are clearly under serious pressure to establish a parliamentary devolution plan.  Expect that to all speed up.

That leaves , , and who all are riding the tiger.

What has to come out of all this is a combination of true representative government, and the outright suppression of ideologies fomenting authoritarian solutions including political Islam.  I do not see an easy evolution at all.

What has ended is the past.  We had a break with Colonialism sixty years ago whose effective touch had been generally constructive, but also very brief and insufficient to change much.  One only has to read an optimistic report on progress in the to understand just how far off the mark the successor regimes became.  This break is from the post colonial successor regimes who have had a sixty year run at making their countries work.

We are now watching the people themselves assert real control over who will rule them.  The lessons of the enlightenment we had though lost on the Arab world were not.  They are now crafting Arab solutions to the needs of their polities.

This means that the old must first disintegrate before it can all be integrated back into a recognizable system.  So perhaps we really need to be optimistic.   The Dictators are gone or going, The Kings are discovering a late enthusiasm for their constitutions and the people are all learning how to vote and debate the nature of their government.

It has settled down generally but it is actually regforming.

The defenders had fled, and there was no immediate word on the whereabouts of Kadhafi or his family after the insurgents breached the defences as part of a massive assault that began in the morning.

"Rebels breached the surrounding cement walls and entered inside. They have taken Bab al-Azizya. Completely. It is finished," an AFP correspondent said.

"It is an incredible sight."

The seizure of the compound sparked celebrations by the rebel fighters, who fired their weapons in the air before raiding the armoury and seizing ammunition, pistols and assault rifles.

"It is an incredible sight," the correspondent said, adding that the bodies of a number of apparent Kadhafi fighters were lying inside, as were wounded people.

Amid reports that ordinary citizens were beginning to stream into the complex of several hectares (acres), rebel television Al-Ahrar called on people to stay away so that insurgent fighters could mop up inside.

It also urged police in to remain at their posts in order to guarantee security.
A rebel official in the western city of said that "at the same house used by Kadhafi before to describe the Libyan people as rats, today the independence flag is flying on its roof."

He was referring to a speech by Kadhafi soon after the rebellion was launched in mid-February in which he referred to those rising up against him as "rats."

The fighting for Kadhafi's nerve centre was the most intense in the city since rebel fighters in their hundreds came surging through its gates three days ago.

The sky in the afternoon was filled with the sound of heavy and light machine guns as well as mortars, with the overhead roar of NATO jets, though it was unclear if they carried out air strikes.

Even two kilometres (about a mile) from the fighting, the almost constant whistle of falling bullets could be hear from the rooftops, as the city's mosques chanted "Allahu Akbar" (God is the greatest).

Rebel leaders said fighters from their western bastion of Misrata, renowned for their prowess after breaking a months-long siege of the port city by Kadhafi's forces, had joined rebels in the assault, which also saw the deployment of tanks captured from loyalist forces.

"We are now in Ras Lanuf," Bani told AFP, adding he hoped insurgents would soon reach Bin Jawad, a hamlet just east of Sirte and almost halfway between the rebel-held cities of Benghazi and Misrata.

Bab al-Azizya had been the site chosen very early Tuesday by Kadhafi's son, Seif al-Islam, to make an appearance before journalists to refute reports that he had been arrested by the rebels.

" is under our control. Everyone should rest assured. All is well in ," Seif said at the compound, smiling broadly and flashing the V-for-victory sign.

"I am here to refute the lies," the 39-year-old said about reports of his arrest, and accused the West of waging a "technological and media war to cause chaos and terror in ."

Seif, like his father, is wanted by the International Criminal Court (ICC) for crimes against humanity. He said Kadhafi and his entire family were still in , denying rumours he had fled but without specifying the exact location.

His comments were backed up by the Russian head of world chess who said on Tuesday Kadhafi had told him in a telephone call that he was in and did not intend to leave the country.

"I am alive and healthy. I am in and do not intend to leave . Do not believe the lying reports by Western television companies," Kirsan Ilyumzhinov quoted Kadhafi as saying in the conversation, the Interfax news agency reported. Ilyumzhinov had met Kadhafi in in June.

NATO insisted Tuesday that Kadhafi's time is up but stressed that he was not being personally targeted by the Western military alliance.

"The end is near," chief NATO spokeswoman Oana Lungescu said in .

"A brief appearance in the dead of night doesn't indicate to me someone who is in control of a capital," she said, referring to Seif. "It shows the remnants of the regime are on the run."

Operation Unified Protector spokesman Colonel Roland Lavoie Lavoie told the press conference via video-link from the Libyan mission's Naples headquarters, that Kadhafi himself is "not a target" for NATO.

"NATO does not target individuals," he said.

In , French President Nicolas Sarkozy said he had agreed with his counterpart Barack Obama to continue military action against Kadhafi until he lays down his weapons.

Sarkozy's said in a statement that the two leaders had held telephonic talks during which they "agreed to pursue their military effort in support of the legitimate Libyan authorities for as long as Kadhafi and his clan have not put down their arms."

They were referring to the NATO-led bombing campaign launched in March under a UN mandate to protect civilians in .