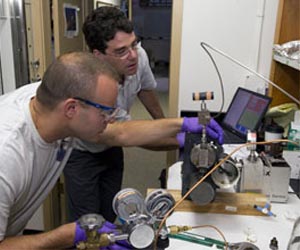 During the Deepwater well disaster, the most dramatic effect after the fire itself was the persistence of a plume deep in the water.  Now it turns out that plume represented only two percent of oil flow and consisted of the soluble fraction referred to as BTEX.  The remaining oil has been consumed by evaporation and ongoing biological degradation.

We can also presume that the BTEX fraction which appears to be dilute enough to cause no lasting problem is also been biologically degraded.  This really needs to be confirmed although it certainly looks good.

The good news is that Mother Nature is able to handle a massive oil spill in tropical conditions to a large extent quite quickly.  That does not make the experience pleasant but we have to take it.

The good news is that we are entering the last decade of the Age of oil.  Good ri9ddence although I have plenty of family and friends who will lament its end.

Taking another major step in sleuthing the 2010 Deepwater Horizon oil spill, a research team led by the Woods Hole Oceanographic Institution (WHOI) determined what chemicals were contained in a deep, hydrocarbon-containing plume.

The plume was at least 22 miles long.

The scientists mapped and sampled it last summer in the ; it was a residue of the Deepwater Horizon oil spill.

The researchers took a major step in explaining why some chemicals, but not others, made their way into the plume, they report this week in the online edition of the journal Proceedings of the of Sciences.

The National Science Foundation (NSF) funded the project through three Rapid Response Research grants, which enable support for fast-response research tied to events such as the Gulf oil spill.

"By any measure, this is a remarkable study," says Don Rice, director of NSF's chemical oceanography program. "Reddy and colleagues add several critical tiles to the growing Deepwater Horizon mosaic. We now have hints of why some earlier studies appear to refute one another.

"Most importantly," says Rice, "we now have a far better understanding of how and why an oil 'spill' into the ocean from below differs from one from above. The significance of this work extends well beyond the ."

It "helps explain and sheds light on the plume formation, and verifies much of what we thought about the plume's composition," said WHOI chemist Christopher Reddy, lead author of the study.

The data "provide compelling evidence" that the oil component of the plume sampled in June 2010 essentially comprised benzene, toluene, ethybenzene, and total xylenes--together, called BTEX--at concentrations of about 70 micrograms per liter, the researchers reported.

The BTEX concentrations in the plume were "significantly higher than background," Reddy said. "We don't know with certainty the adverse effects it might cause on marine life."

WHOI scientist Judith McDowell said that acute toxicity levels of BTEX are in the range of 5 to 50 milligrams per liter for aquatic organisms--100 to 1,000 times greater than that observed in the plume.

Sublethal effects, including neurological impairment, are observed at lower levels, she said.

"In most instances the BTEX compounds are volatilized very quickly, such that exposure duration is very short," McDowell said. "The persistence of BTEX at depth poses an interesting question as to the potential effects of these compounds on mid-water organisms."

A critical component of the study was a one-of-a-kind fluid sample the team collected directly from the broken riser at the Macondo well.

To accomplish this, the team used an isobaric gas-tight sampler, a unique piece of equipment developed by WHOI geochemist Jeff Seewald and his colleagues, and intended for use collecting fluids from deep-sea hydrothermal vents.

With the gas-tight sampler and other necessary equipment, the lead scientists were shuttled from their active research vessel to a smaller boat and brought to the Ocean Intervention III, operating above the Macondo well.

They were then given 12 hours--working with many unknowns--to do something never done before.

Using an oil industry remotely operated vehicle, they maneuvered the gas-tight sampler to the source of the spill to capture an "end-member" sample of fluid as it exited the riser pipe.

No other such sample exists.

By analyzing this sample, the scientists were able to determine what was in fluid spewing from the Macondo well before nature had a chance to weather it and the exact ratio of gas and oil in the fluid.

"Getting this sample was probably the most dramatic and thrilling thing I have done in my life," Reddy said.

Using petroleum industry terms, they found a gas-to-oil ratio (GOR) of 1,600 cubic feet of gas per barrel of oil. This value is smaller than other proposed values, Reddy said, suggesting "more oil may have been coming out of the well than other people calculated."

Analyzing samples from the Macondo well and those they collected from the plume in June 2010 aboard the research vessel Endeavor, the researchers found that BTEX represented about 2 percent of the oil that came out of the well, but "nearly 100 percent of what was in the plume," Reddy said.

"A small, selective group of compounds took a right-hand turn" after exiting the well and formed the 3,000-foot-deep plume, he added.

This raises a number of questions, he said, including, "Why are those chemical there in those concentrations? Why are they so abundant in the water?"

The answers have to do with the tendency of those chemicals that "like" to dissolve in water to migrate to the plume, Reddy said.

Unlike other substances emanating from the well that degrade or evaporate in the water or at the surface, the compounds in the plume showed little evidence of biodegrading when the researchers examined the plume in June 2010.

"[O]il and gas experienced a significant residence time in the water column with no opportunity for the release of volatile species into the atmosphere," the researchers reported.

"Hence water-soluble petroleum compounds dissolved into the water column to a much greater extent than is typically observed for surface spills."

"We needed to have an 'end-member' sample, so that we could compare how nature affected the hydrocarbons as they left the riser pipe," Reddy said.

"So this story is really about, 'From pipe to plume: what chemicals got off the elevator to the surface and migrated to the plume.'"

The findings have "direct implications for the ecotoxicological impact of plumes," Reddy said. "Now that we know the compounds were there for a certain time, we need to look at what that would mean to ocean life. This paves the way to look at any environmental effects."

The key to locating and mapping of the plume and the collection of samples from the plume was the use of the mass spectrometer TETHYS integrated into the autonomous underwater vehicle Sentry, funded by NSF.

Developed by Richard Camilli of WHOI's Deep Submergence Laboratory, the mass spectrometer is capable of identifying minute quantities of petroleum and other chemical compounds in seawater instantly.

This knowledge of the plume structure guided the team in collecting physical samples using a traditional oceanographic tool, a cable-lowered water sampling system that measures conductivity, temperature, and depth (CTD).

The CTD also was instrumented with a TETHYS the mass spectrometer to positively identify areas containing petroleum hydrocarbons.

Since TETHYS is limited in its ability to analyze petroleum hydrocarbons, Reddy said, the best samples were brought back to the land-based laboratories for more sophisticated analyses, which included the help of NOAA.

Other WHOI researchers who joined Reddy and Camilli in the study were Sean P. Sylva, Karin L. Lamkau, Robert K. Nelson, Catherine A. Carmichael, Cameron P. McIntyre, Judith Fenwick, and Benjamin Van Mooy. Also participating in the study were J. Samuel Arey of the Swiss Federal Institute of Technology at and G. Todd Ventura of . The research was also funded by the Coast Guard.