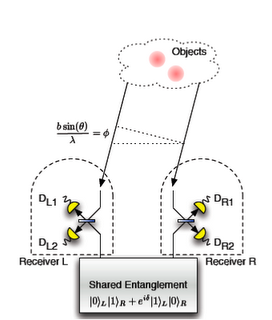 The next leap for mankind in astronomy is building out very long baseline systems out in the solar system itself.  The moon will be a great place to start.  This item talks of technology critical to all this.

We have already winkled out the existence of large planets.  A thousand fold improvement or even way beyond that will allow us to even map nearby solar systems to a high level of resolution.

It will all take about twenty years at most as we should have our own magnetic field exclusion vassals by then.

We are already in the golden age of astronomy and it will soon get better.

We present an approach to building interferometric telescopes using ideas of quantum information. Current optical interferometers have limited baseline lengths, and thus limited resolution, because of noise and loss of signal due to the transmission of photons between the telescopes. The technology of quantum repeaters has the potential to eliminate this limit, allowing in principle interferometers with arbitrarily long baselines. 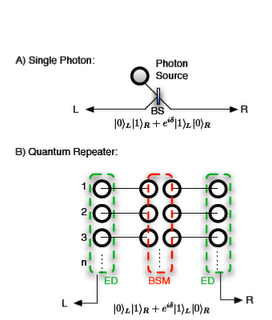 The two primary goals for a telescope are sensitivity and angular resolution. Interferometry among telescope arrays has become a standard technique in astronomy, allowing greater resolving power than would be available to a single telescope. In today's IR and optical interferometric arrays, photons arriving at di erent telescopes must be physically brought together for the interference measurement, limiting baselines to a few hundred meters at most because of phase uctuations and photon loss in the transmission. Improved resolution would, if accompanied by adequate sensitivity, have many scienti c applications, such as detailed observational studies of active galactic nuclei, more sensitive parallax measurements to improve our knowledge of stellar distances, or imaging of extra-solar planets. The eld of quantum information has extensively studied the task of reliably sending quantum states over imperfect communications channels. The technology of quantum repeaters can, in principle, allow the transmission of quantum states over arbitrarily long distances with minimal error. Here we show how to apply quantum repeaters to the task of optical and infrared interferometry to allow telescope arrays with much longer baselines than existing facilities. The traditional intended application for quantum repeaters is to increase the range of quantum key distribution, but the application to interferometric telescopes has more stringent demands in a number of ways. Quantum repeaters are still under development, and our work provides a new goal for research in that area. It sets a new slate of requirements for the technology, but simultaneously broadens the appeal of successfully building quantum repeater networks.


In this paper, we have primarily considered how distributed quantum entanglement can potentially improve optical interferometry. For radio frequencies, interferometry can be performed robustly today even between telescopes spread across the planet. Optical frequencies are much higher, so fewer photons arrive per second, making interferometry much more difficult. In telescope design, the arriving light is usually treated classically, but when the number of photons arriving is small, the quantum state of the light may become important. Thus, the eld of quantum information is well-suited to provide advances. Quantum repeaters have until now been under development primarily for use in quantum communications, so interferometry o ers a very interesting new venue for the application of quantum information techniques.


As we have shown, in the long run, quantum repeaters can completely lift the upper limit on distance over which it is possible to do interferometry. In order to do so, a number of technical hurdles need to be overcome, either by improved technology or by theoretical innovations. We need high-rate bandwidthmatched single-photon sources, and high efficiency photodetectors with very fast time resolution. We also need robust quantum repeater protocols, including entanglement distillation. One additional requirement we have is that the light arrives in the telescope in certain modes, and the quantum repeater modes must adapt to that. Therefore, the repeater protocols need to work at the desired optical frequencies or we need to implement technologies to shift the frequencies of either the arriving light or the entangled photons.


Quantum information technology may o er even more signi cant applications to help improve astronomical observations. For instance, it may be advantageous to coherently store arriving photons using a quantum memory and then perform the quantum Fourier transform, rather than measuring, waiting and performing the classical Fourier transform. The quantum Fourier transform works reasonably well even with a small number of photons, whereas if we measure rst, we need enough photons to get a reliable measurement of each phase.