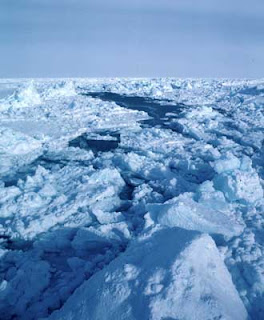 This is an excellent report on what is happening with the arctic Ice. Most important it is clear that the ice loss trend has continued and is continuing to eliminate multiseasonal ice at a much faster rate than anyone anticipated.

If the ice could actually escape from the arctic, we would actually have clear seas. Escapement is the long term control though as that will keep a lot of older ice in place.  It is apparent at this point that ice loss is a continuing factor with no end in sight and we should stabilize around a slowly rotating gyre of sea ice that migrates over a three year period.  This is my present guess and I would like to see a confirmed real number for this.  The present situation is that it appears that little ice is surviving the entire circuit and the gyre is actually losing a lot of mass.

This may be the limiting factor though.  Ice loss may well concentrate on the perimeter of the gyre rather than fully undermine the gyre itself.  Thus the heat engine while warming the and sharply reducing the gyre in size may well be unable to overwhelm the core of the gyre itself.

We would see a steady increase in available heat in the that will eventually become apparent as longer better summers.

Over the past thirty years, the has sustained a monumental loss of accumulated ice that is gone forever.  This is unprecedented.  It was not obviously caused by any climate driver that is creditable and therefore must represent an increase in warm surface waters been injected into the Arctic from the .  We do have some evidence of unusual changes that supports this.

The process is ongoing and continues to impact the sea ice.

I find naval measurements to be misleading because they end up measuring present thickness of fresh ice which in current conditions are been immediately broken up in the succeeding summer.  This also suggest that the original loss calculations indicated from the 1959 – 2000 drop may also need reconsideration.

Yet the core calculation has held up.  We have lost the majority of our multi year ice by 2012.  What is left is a gyre of recent broken up ice that is continually renewed and destroyed every year as it travels around the gyre.

The most recent global climate report fails to capture the reality of the changing Arctic seascape, according to MIT researchers.

Taken from the Canadian Research Icebreaker CCGS Amundsen, in the in September 2009.

The — a mosaic of oceans, glaciers and the northernmost projections of several countries — is a place most of us will never see. We can imagine it, though, and our mental picture is dominated by one feature: ice.


Yet the Arctic sea ice is changing dramatically, and its presence shouldn’t be taken for granted, even over the course of our lifetimes.


According to new research from MIT, the most recent global climate report fails to capture trends in Arctic sea-ice thinning and drift, and in some cases substantially underestimates these trends. The Intergovernmental Panel on Climate Change (IPCC) Fourth Assessment Report, released in 2007, forecasts an ice-free Arctic summer by the year 2100, among other predictions. But Pierre Rampal, a postdoc in the Department of Earth, Atmosphere, and Planetary Sciences (EAPS), and colleagues say it may happen several decades earlier.


It’s all in the mechanics


Established in 1988 by the United Nations, the IPCC issues reports that represent an average of many findings, and is sometimes criticized for forecasting according to the “lowest common denominator” of climate research. Still, many policymakers put large stock in its predictions, so Rampal says it is important to continuously evaluate and improve their accuracy.


After comparing IPCC models with actual data, Rampal and his collaborators concluded that the forecasts were significantly off: Arctic sea ice is thinning, on average, four times faster than the models say, and it’s drifting twice as quickly.


Part of the problem, Rampal says, may be inadequate modeling of mechanical forces acting on and within the ice in the Arctic basin. Thus far, the IPCC models have largely focused on temperature fluctuations, which are one way to lose or gain ice. But according to Rampal, mechanics can be just as important: Forces such as wind and ocean currents batter the ice, causing it to break up. Ice that’s in small pieces behaves differently than ice in one large mass, which affects its overall volume and surface area.


“If you make a mistake at this level of the model, you can expect that you are missing something very important,” Rampal says.


The seasonal tug of war


Rampal says mechanical forces can play a significant role in winter, when little melting occurs but when strong winds and ocean currents can wreak drastic effects on the ice’s shape and movement.


Traditionally, in winter, most of the was covered with a thick sheet of ice. But today’s winter ice cover is thinner, meaning it breaks up more easily under the influence of winds and currents. It eventually looks like an “ensemble of floes,” Rampal says, instead of one large mass. In summer, natural melting due to warmer temperatures opens the door to even more breakup. (Scientists refer to these patches of floes as “pancake ice,” because the small circular pieces look like — yes — pancakes on a griddle.)


During both seasons, ice in this state is prone to escaping from the Arctic basin, most commonly through the , a wide swath of ocean between Greenland and the Norwegian archipelago of . The smaller the floes, the more likely they are to be lost through the , where they melt on contact with warmer waters to the south.


So, several factors are connected in a positive feedback loop: Thinner ice breaks more easily; smaller chunks of ice drift more quickly; and drifting ice is more prone to export and melting at lower latitude. But Rampal also cites examples of negative feedback loops, which may counteract some of the ice loss. For example, large cracks in winter’s ice cover help create new ice, since the extremely cold air in contact with the liquid ocean promotes refreezing, which leads to a sheet with greater surface area than before.


Because “everything is coupled” in these intricate feedback loops, “it’s hard to predict the future of Arctic sea ice,” Rampal says. Doing so will require more thorough modeling and real-world observations, especially of mechanical forces and other ice phenomena that have been poorly understood. Rampal is now working on a project with researchers at MIT and NASA’s Jet Propulsion Laboratory, whose goal is to combine models and observations for a more accurate picture of the state of the world’s oceans.


Bruno Tremblay, an associate professor in the Department of Atmospheric and Oceanic Sciences at McGill University, agrees that “the dynamic of sea ice is really important,” and inadequate modeling of mechanical forces is “part of the reason [the IPCC report] can’t predict correctly the future of sea ice decline.” Still, he cautions against jumping to overly grim conclusions, citing a need to consider subtle changes in the Arctic atmosphere: At some point, for instance, “maybe the wind no longer aligns itself with the , and that reduces ice export,” he says.


Although it’s impossible to say for sure when we might see an ice-free , the IPCC itself has acknowledged that its 2007 report may have painted too rosy a picture. “If you look at the scientific knowledge things do seem to be getting progressively worse,” said Rajendra Pachauri, IPCC chair, in an interview reported by The New York Times shortly after the report’s release. “So you’d better start with the interventions even earlier. Now.”
Posted by arclein at 12:01 AM

I lived in Alaska for nearly 20 years. Having lived in Fairbanks, which is somewhat south of the Arctic Circle, I've nevertheless seen the midnight sun for myself on more than one occasion. Scientists leave out the fact that during the spring and summer, the sun can be up 24 hours a day, for as long as six months dead center at the North Pole.