Laffer: Obama Must Use Reaganomics to Save Economy 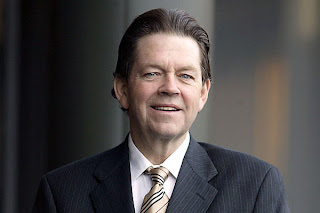 I agree with everything said here except to say that it is still a case of too little and too late for millions of Americans.

Three things need to be done.  The first is that the housing market needs to be reconstituted with a reformed foreclosure law and a swift disposal of all properties into the hands of able owners that should largely be made up of the victims.  See earlier posts of mine on how to go about doing this.

The second is that we need to make liberal use of government loan guarantees to jump start both the national power grid and the national high speed rail system as well as a complete rebuild of infrastructure in general.

The third and possibly the most important is that all states need to be given the authority to issue fiat money through their own state bank as has been done in .

I could add a great deal more to the mix, but this is enough to make the economy rebound to full strength and even full employment.

Otherwise we will suffer the disease and for the same reasons of outright incompetence.

Laffer: Obama Must Use Reaganomics to Save Economy

The only way President Barack Obama can solve the nation’s economic woes is to adopt “common-sense” Reaganomics, the policy’s architect Arthur Laffer claims in an exclusive Newsmax interview.


Laffer said the White House called him in the spring and asked him to speak to Obama’s former Council of Economic Advisors’ chairman Austen Goolsbee – and he had told him exactly the same thing.


“Reaganomics would fix any economy that’s in the doldrums,” Laffer said. “It’s not a magic sauce, it’s common sense.


“You’ve got to get rid of all federal taxes in the extreme and replace them with a low-rate flat tax on business net sales, and on personal unadjusted gross income. That’s number one.


“Number two, you have to have spending restraint. Government spending causes unemployment, it does not cure unemployment.


“Number four you need regulations, but you don’t need those regulations to go beyond the purpose at hand and create collateral damage. The regulatory policies are really way off here.


In the interview the veteran economist said Standard & Poor’s was quite right in downgrading the credit rating – in fact it should have done so far earlier.


The agency had no choice and if the other agencies, Moody’s and Fitch, don’t do the same they won’t be doing their jobs, said Laffer, who gave his name to the Laffer Curve which demonstrates that the maximum amount of government revenue does not come at the point of maximum taxes.


“If you had a company that had revenues of $2½ million and expenses of $4 million, with no change in sight, $1½ million in losses each year as far as the eye can see and it had already borrowed $10 million, what would you rate that company? I surely wouldn’t rate it AAA.


“That is the situation today," Laffer said. "Taxes are about $2½ trillion, government spending is about $4 trillion and we have about $10 trillion in net national debt. I don’t see that as being a AAA country.


“If the S&P and the others were doing their jobs correctly, they should have downgraded a long time ago.”


Laffer said he has no doubt the country will win its top rating back, but only when economic policies are completely turned around. He said President Barack Obama’s administration’s only economic plan seemed to be to expand government ownership of the means of production.


“They have nationalized the health care industry pretty extensively. They’ve done that with home building as well. They’ve tried it with the auto industry as well. So they have moved very, very deliberatively and purposefully toward extending the government ownership of the means of production.


“People don’t work to pay taxes, people work to get what they can after taxes. It’s that very private incentive that motivates them to work. If you pay people not to work and tax them if they do work, don’t be surprised if you find a lot of people not working.”


Laffer said the current economic woes started to form under President George W. Bush but have been made worse by Obama’s policies.


“There’s a wedge driven between wages paid and wages received and that wedge is the tax/government spending wedge,” he said.


“That wedge has grown dramatically in the last 4 ½ years…under W and a Republican administration and…under Obama. Bipartisan ignorance has led us to this very disastrously desolate state.”


Laffer had high praise for the role the tea party has played in bringing the problem of the deficits to the fore.


“The tea party is not the problem, the tea party may well be the solution,” he said. “They are critical to the future of the country in a positive way. They are the only fiscally sound people I know out there all the time.


“I don’t know that I would go as far as they go on a lot of issues but I surely respect their movement very much.”


And he said any one of the group of Republicans vying for the party’s nomination for the White House would make “ a great president.”


“Tim Pawlenty is spectacular. Newt Gingrich knows more about issues than anyone you’ve ever seen. Michele Bachmann is out-of-sight wonderful,” he said.


“Rick Perry is second to no one in this stuff. If you look at Herman Cain, he’s phenomenal.


“Oh and (Jon) Huntsman was a great governor of the state of and is a phenomenally experienced intellectual competent man.


“When you look at the Republican candidates, you see a group of people who are absolutely outstanding in attributes.”
Posted by arclein at 12:01 AM