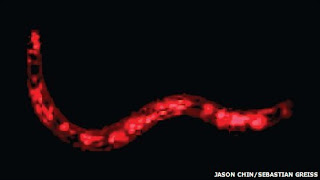 This is the first step in directly altering the DNA of creatures in directions chosen by ourselves.  We are no longer tied to the existing living animals and to working solely with them.  There is actually plenty of suggestive evidence supporting earlier work by humanity along these lines some forty thousand years ago, but that is another tale.  My point is that we are now starting to do just that ourselves and will soon surprise ourselves.

Soon enough we will be able to produce space adapted humanity ourselves.

I wonder just how much folks will howl when they really begin to understand how much capability we are gaining over life’s design?

Researchers say they have created the first ever animal with artificial information in its genetic code.

The technique, they say, could give biologists "atom-by-atom control" over the molecules in living organisms.

One expert the BBC spoke to agrees, saying the technique would be seized upon by "the entire biology community".

The work by a team, which used nematode worms, appears in the Journal of the American Chemical Society.

The worms - from the species Caenorhabditis elegans - are 1mm long, with just a thousand cells in their transparent bodies.

What makes the newly created animals different is that their genetic code has been extended to create biological molecules not known in the natural world.

Genes are the DNA blueprints that enable living organisms to construct their biological machinery, protein molecules, out of strings of simpler building blocks called amino acids.

But Sebastian Greiss and Jason Chin have re-engineered the nematode worm's gene-reading machinery to include a 21st amino acid, not found in nature.

Dr Chin of the Medical Research Council's Laboratory of Molecular Biology (where Francis Crick and James Watson first cracked the structure of DNA) describes the technique as "potentially transformational": designer proteins could be created that are entirely under the researchers' control.

The development builds on techniques first developed at the Scripps Research Institute, in , where Dr Chin worked 10 years ago.

The genetic code comes in four DNA letters, A,C,G and T; the genetic machinery reads it in words three letters long, called codons, which stand for the individual amino acid blocks to be built into a growing protein.

At Scripps, researchers showed in a paper in PNAS how one of those three letter words could be re-assigned, so that cells would read it as an instruction to incorporate an unnatural amino acid, one not normally found in living organisms. But that was in the bacterium E. coli; until now, no one had succeeded in doing the same in a whole animal.
Jonathan Hodgkin, professor of genetics at Oxford University, welcomes the new development, saying it "creates exciting new opportunities for research on C. elegans".

Closer to home, Dr Mario de Bono, an expert on C elegans, who is also at the Laboratory of Molecular Biology, predicts "this sort of news travels like wildfire" among research biologists, adding that the method could be applied to a wide range of animals.
So far it is just a proof of principle - the artificial protein that is produced in every cell of the nematode worm's tiny body contains a fluorescent dye that glows cherry red under ultraviolet light. If the genetic trick failed, there would be no glow.

But Dr Chin says any artificial amino acid could be chosen to produce specific new properties. Dr de Bono suggests the approach could now be used to introduce into organisms designer proteins that could be controlled by light.

Indeed, the two are planning to collaborate on a detailed study of neural cells in the nematode brain, aiming to activate or deactivate individual neurons in precise ways with tiny laser flashes.

Dr Chin rather modestly admits he's "incredibly pleased" to have succeeded in a project he had avoided until a year and a half ago, for fear that other well-established competitors would get there quicker.

On the other hand, Dr de Bono compares the invention with the Nobel-prize winning work on green fluorescent protein, which are now part of the standard kit in biology labs across the world.