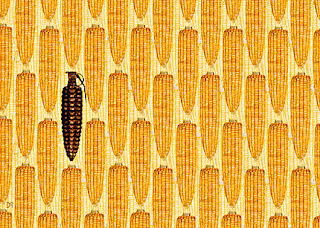 Folks have been complaining for years, but the reality is now well established.  Monsanto in particular has been able to play monopoly with industrial agriculture to such an extent that operators right now are effectively unable to wriggle free without a massive lossing investment.

This monopoly has been set up by the usual methods with particular attention been paid to locking down a regulatory regime that blatantly favors Monsanto in quite the same way Pharma has gamed the medical supply business.  These are all regulatory monopolies that serve only the monopoly and the consumer is powerless price taker.

Shouting that this is wrong from the roof tops is not going to work too well either.  The real answer must come with the advent of truly modern community friendly neo organic farming that emerges beside the industrial farms and starts by simply not competing directly on the same crops.

I already know how to organize it and do it and that will be the real future of agriculture.  This nonsense is going to run into a vicious wall of diminishing returns as available operators retire and are simply not replaced while margins continue to be squeezed by Mother Nature until breakdowns run amok.

Farmers speak out: GMOs are a trap that Monsanto is using to take over agriculture

(NaturalNews) Most Americans have no idea just how pervasive genetically-modified organisms (GMO) have become throughout the food supply. Predatory marketing practices have lured many farmers into converting over to GMOs, and craftily-designed, proprietary growing systems have kept them there. Meanwhile, multinational biotechnology companies like Monsanto effectively seize the reigns of agriculture and dictate how it will proceed from here.


In the short, but highly informative, documentary Farmer to Farmer: The Truth About GM Crops, family farmer Michael Hart interviews a number of farmers in the US about their experiences growing GM crops. He also asks them whether or not they would recommend GM crop systems to other farmers, particularly those in the and that are currently being pushed to adopt them.


You can watch the short documentary here:

Hart discovers, of course, that GM crops are not all that Monsanto toots them to be. Besides failing to improve crop yields, GM crops require increasingly more pesticide and herbicide applications in order to remain viable. And out of control "superweeds;" escalating prices for seeds, pesticides, and herbicides; and the non-reality of coexistence between GM and non-GM crops are among the many additional problems farmers are facing -- and unfortunately, viable solutions to these problems are largely non-existent.

Monsanto's goal is to convert everybody to Roundup Ready crops, buy out all the seed companies, and control the agriculture market

We frequently cover the topic of GMOs here at NaturalNews -- exposing both the schemes employed to implement them around the world and the political gerrymandering taking place in nations like the US and Canada that keeps them unlabeled and ensures they maintain a strong and ever-increasing foothold in agriculture. And Monsanto's endgame, of course, is to control the entirety of agriculture.


Monsanto's strategy with GMOs is a long-term one, and one that has crept in largely unaware throughout the years. According to the latest figures, Monsanto's GM crops now blanket over 330 million acres. Ninety-three percent of soybeans grown in the US are GM, and 77 percent of soybeans worldwide are GM. Most  corn, cotton, and canola is also GM (http://www.gmo-compass.org/eng/agri...).


So how did things get this way? In the early 1990s when GMOs were first being introduced in the US, Monsanto and others convinced farmers to adopt them by promising that crop yields would increase, that less pesticides and herbicides would be needed to grow them, and that overall costs to farmers would ultimately decrease. More than a decade later, farmers are now revealing that all of this was a lie.


"The first few years it'll be cheap and economical," said Joe (a farmer who wished to remain anonymous for his own protection) to Hart concerning farmers switching to GM crop systems. "Once everybody is switched to it, you'll lose your choices, you'll no longer have a choice to raise conventional products ... and you'll get yourself into a trap where you're paying royalty fees to companies that own traits and chemicals, and they'll continue to raise those fees every year."


And this is precisely the case with every farmer interviewed in Farmer to Farmer. Adopting GMOs seemed to make sense in the beginning. But after a critical mass of farmers made the switch, Monsanto began to raise prices for seed and pesticides, to buy up seed companies, and even to control GM farmers' ability to mix their own chemicals and save their own non-GM seeds -- and the end result was a widespread loss of agricultural freedom among American farmers.

So why don't farmers who recognize the failure of GM crops simply switch back to non-GM crops? The complex system Monsanto has built makes doing so a near impossibility.

Between buying up seed companies and making non-GM seeds difficult to obtain, and cornering the market on pesticides and herbicides and the research that goes into them, most farmers simply have no choice but to continue planting GM crops. And when their non-GM crops become contaminated with GM traits, any non-GM endeavors are ruined.

"The last years that I was growing conventional soybeans ... our beans kept becoming more and more contaminated," said Rodney Nelson, a GM sugar beet and soybean grower from , concerning his efforts to grow non-GM soybeans. "It was getting down to the point where about 50 percent of our loads were being rejected because of contamination, and we couldn't buy seed that was pure without contamination."

"On top of that, the conventional seed no longer was cheap. The seed companies (many of which are now owned by Monsanto or other Big Ag companies, as NaturalNews recently reported) ... simply hiked the price on their conventional seed, and then when they sold you the seed, it came with a clause the even though its conventional, it's not patented, you couldn't save and replant it ... we didn't have any choice but to go back and start planting Roundup Ready crops. There was no choice, that was the only choice."


Apart from switching to organic, which would take many years of preparation just to get the fields up to organic standards, most GM farmers today have no choice but to continue growing GM crops. As long as the government continues to provide patent protection for GM crops, as well as allow monopoly control over the seed market by biotechnology companies, many American farmers will simply have to remain in the clutches of Monsanto to stay afloat.


Be sure to check out the entire Farmer to Farmer documentary to learn the dirty truth behind GM crops, and why it is absolutely vital to do everything possible to eliminate patent protection for living organisms and to end corporate control over the food supply:

Who is this Monsanto, and where do I find him?


In an effort to rid the country of Monsanto's GMO products, Hungary has stepped up the pace. This looks like its going to be another slap in the face for Monsanto. A new regulation was introduced this March which stipulates that seeds are supposed to be checked for GMO before they are introduced to the market. Unfortunately, some GMO seeds made it to the farmers without them knowing it.

Almost 1000 acres of maize found to have been grown with genetically modified seeds have been destroyed throughout Hungary deputy state secretary of the Ministry of Rural Development Lajos Bognar said. The GMO maize has been ploughed under, said Lajos Bognar, but pollen has not spread from the maize, he added.

Unlike several EU members, GMO seeds are banned in Hungary. The checks will continue despite the fact that seed traders are obliged to make sure that their products are GMO free, Bognar said.

During their investigation, controllers have found Pioneer and Monsanto products among the seeds planted.

The free movement of goods within the EU means that authorities will not investigate how the seeds arrived in Hungary but they will check where the goods can be found, Bognar said. Regional public radio reported that the two biggest international seed producing companies are affected in the matter and GMO seeds could have been sown on up to thousands of hectares in the country.

Most of the local farmers have complained since they just discovered they were using GMO seeds. With season already under way, it is too late to sow new seeds, so this years harvest has been lost.

And to make things even worse for the farmers, the company that distributed the seeds in Baranya county is under liquidation. Therefore, if any compensation is paid by the international seed producers, the money will be paid primarily to that company's creditors, rather than the farmers. {Via}