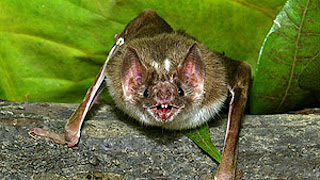 In the end it appears they can taste the heat at that low level in order to identify the target spot.  The effect was implied and now we have identified the actual pathways that make it possible.

The vampire bat must find a blood meal every one to two days to survive. A heat-sensing molecule called TRPV1 covering nerve endings on the bat's nose helps it achieve this goal. (Dr. Pascual Soriano )

http://www.cbc.ca/news/technology/story/2011/08/03/science-vampire-bats-molecule-heat-seeking.html
How vampire bats know precisely where to bite to strike a blood-spurting vein close to the skin has always been a mystery — until now.

A team of American and Venezuelan scientists studying wild vampire bats in has discovered a heat-sensing molecule called TRPV1 covering nerve endings on the bats' noses.

The finding, published in this week's journal Nature, shows how small changes to a particular species' genes can lead to important evolutionary adaptations.

In this case, it allows the vampire bat to detect infrared heat and zero in on the most blood for the bite, says lead researcher David Julius, a molecular biologist at of , .

TRPV1 is used by other animals to detect "noxious heat" — that is, painful heat above 43 C, says Brock Fenton, an expert in the behaviour and ecology of bats at the , who was not involved in the research.

"In vampire bats, however, the TRPV1 activation threshold is lowered to about 30 C," wrote Fenton in an accompanying commentary piece inNature.

While scientists have known for a long time that vampire bats' noses guide them to the best spots, they didn't know how. This new research shows the key is not just TRPV1, but an evolutionary genetic variation of it that allows vampire bats to sense low-temperature heat.

Intriguingly, the same molecule is also found on pain sensing nerve fibres in humans. On our tongues, it allows us to detect the burn of spicy food. On our skin, it lets us feel the pain of touching a hot object or of a sunburn.

That's why drug companies are working on developing new pain medications that target molecules like TRPV1.

TRPV1 belongs to a large family of molecules found in many animals. Depending on the species, those molecules have slightly different DNA and appear in different parts of the body.

But what they have in common is that the molecules cover nerve endings and can alternatively open or close in response to a chemical, heat, cold or the pressure of touch. With the right balance of openings and closings, the nerve will fire, sending a signal to the brain that says "hot" or "cold" or "hard" or "bitter."

Many animals have highly specialized adaptations allowing them to see, feel, hear or taste in special ways. In humans, painful stimuli signal danger to the brain and make us pull away to protect ourselves.

"There is a lot of stuff in our environment that we want to stay away from," said Julius.