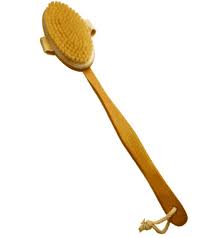 I must admit I have never heard of this, but it appears to be early days in the method’s popularity.  I suspect that most everyone else is just as uninformed, yet the arguments laid out in this article are rather compelling.  Brush your skin to assist in skin based elimination.  That that elimination exceeds any other method is startling and unexpected.  We learn that using a simple brushing encourages that elimination and it likely takes less than a couple of minutes before you have a daily shower.

In effect this is a form of skin stimulation that triggers best performance of the skin.  It is interesting that the much maligned cellulite issue has been associated with a lack of elimination easily reversed with such brushing.

It would be amusing to discover that much sagging skin is the result of such poor elimination rather than the general effects of gravity.  Whatever the truth is this is certainly a easy and viable protocol that we all should apply as a matter of course just for the stimulation of both the flesh and the nervous system.

The cheapest, fastest, easiest way to detoxify the whole body, look younger and be healthier

(NaturalNews) Some years back I heard Bernard Jensen, one of our country's great nutritionists and author of over 50 books, tell the story of Samson, "the Saxon Giant." Samson was a weight lifter and wrestler who was brought to the by Florenz Zeigfield in the 1920's as one of the featured acts in the Zeigfield Follies. Besides his strength, Samson was also known for his baby-soft skin, a feature that Samson attributed to his daily regimen of dry skin-brushing, and a fact that greatly intrigued Jensen.


One year, so the story went that Jensen told, Samson lost the world's championship heavyweight weight-lifting contest by just 10 ounces. Jensen was able to find and examine Samson's diaries, and found that Samson had a novel theory explaining his defeat. Samson attributed his loss to the fact that he had neglected to dry-brush his skin for three weeks prior to the contest.


Jensen decided to do a little experiment of his own to see why Samson would have reached such an unusual conclusion. Jensen bought a skin brush and stood on brown wrapping paper while he brushed his own body. After enough debris had fallen onto the paper, Jensen sent the material to a lab. The lab found a lot of dead skin, which, of course, was expected. But the lab also found dried catarrh, urea, sodium chloride, sebum and metabolic acid wastes. From his little experiment, Jensen came to understand that when these substances are not removed from the skin, they can become backed up in the muscle structure, and can consequently cause a loss of vitality. Jensen became a great advocate for daily dry-skin brushing.


One of the most wonderful things about our bodies is that its largest organ - the skin -- is on its outside. We can, and do, automatically and continuously both nourish and detoxify our bodies through the skin.


The ability of the skin to accept substances and deliver them to the bloodstream is well-known. The skin serves as a direct link to all the other organs. Contemporary physicians have revived the age-old practice of delivering medicine through the skin. Heart patientsuse nitroglycerin patches; cigarette smokers try to break their addiction through the use of nicotine patches. So great, in fact, is the ability of the skin to absorb substances that one drop of essential oil placed on the fingertip will show up in hair analysis ten minutes later.


The skin's ability to excrete toxins, however, is not as well emphasized. In natural health circles, the skin is referred to as the body's third lung, or third kidney. It aids tremendously in throwing off all toxins from the body. We absorb more impurities, and eliminate more waste through the skin than any other organ in our bodies (including the colon). Two pounds of waste are eliminated every day through the skin. The skin works hand in hand with the kidneys. On hot days, we do a lot of our elimination through our skin, and our kidneys don't have to work as hard. Conversely, on cold days, our kidneys take over this function of the skin because the skin is not eliminating as much.


The body organizes itself, in part, through a continuous dance of creating new while simultaneously shedding old, and it does this process especially efficiently with skin cells.


The skin is often the first place that biological imbalance appears. When the other systems are overloaded in dealing with too many toxins, the skin is utilized as an additional organ of detoxification. Sometimes old cells can cling to the surface of the skin, trapping pathogenic microorganisms like bacteria within; as well new cells are inhibited from breathing. Eruptions, blemishes, odors and colors may appear as the skin tries to do overtime in ridding the body of waste.


Skin brushing is especially useful for lymphatic cleansing. Cleansing the lymphatic system is essential because the lymph glands serve as one of the body's primary defense mechanisms. The lymphatic system cleanses out cellular debris that the bloodstream has not been able to take care of, such as viruses, bacteria and dust.


The lymphatic system is like the circulatory system: it moves a fluid -- which makes up about 80% of total body fluids -- throughout the body. This lymphatic fluid picks up debris as it moves along its path. Normally, excess lymphatic fluid is excreted through the skin, the kidneys and other eliminative organs.


Improper lymphatic drainage is one of the main reasons that so many women are plagued with cellulite. The dimples that form on the thighs and buttocks are due to the accumulation of fats, proteins and other waste products that are not being excreted from the body efficiently. These unwanted products are usually carried out of the body by the lymphatic system. Dryskin brushing helps to kick-start the lymphatic system by stimulating the lymph canals, which helps detoxify the blood and reduces the toxic build up that causes cellulite.


Jensen himself was testimony to his own theory. When he was 88, he appeared at a conference I was attending. He rolled up his shirt sleeves and pulled up his pants legs, showing us the skin on his arms and legs. There was not a single wrinkle, line or blemish anywhere on this man's body that we could see. Jensen, like Samson, attributed the beauty of his skin - its tautness, smoothness and elasticity - to his daily regimen of skin brushing.

Jane G. Goldberg, Ph.D. is a psychoanalyst and author of 7 books, including the acclaimed, The Dark Side of Love. As well, she is the owner of La Casa Day Spa in NYC , now celebrating its 18th year anniversary. In her specialization of working with cancer patients, Dr. Goldberg has integrated her psychoanalytic work with the field of holistic health. She has worked with many cancer patients who, through commitment to sound principles of health as well as an interest in the exploration of their mental, emotional and psychic states, have defied the statistical odds and consider themselves "cured."

Dr. Goldberg is also the Founder and Director of Brainercize, a system of interactive integrative brain exercise classes designed to maximize brain functioning

http://www.naturalnews.com/033194_skin_brushing_detoxification.html#ixzz1Tl4Kp0Ic
Posted by arclein at 12:01 AM