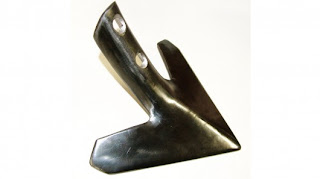 Even if they can simply coat the moldboard and leave the leading edge alone, a lot of the friction goes away.  However, we are likely looking at the leading edge been made from a particularly resistant metal that holds the diamond like coating.  Most likely be are dealing with graphene in some form, or if we are not we soon will be.

Graphene embedded in a tough metal would also do wonderfully.

In the event, the good stuff needs only weigh ounces while the structure itself can even be steel.

What is coming is a new generation of earth cutting tools that will be vastly superior and also produce those fuel savings.

We are a long way from working with material repaired by a trip to the forge. 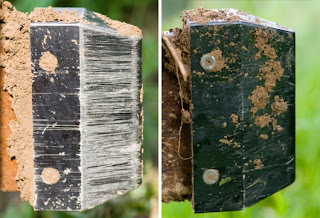 Plows are one of the most basic agricultural implements and have been in use for thousands of years. In that time they've evolved from simple ox-drawn scratch plows consisting of a frame holding a vertical wooden stick dragged through the topsoil - which are still used in many parts of the world - to tractor-mounted plows that can have as many as 18 moldboards. The evolution of the humble plow looks set to continue with Fraunhofer scientists working on diamond-like carbon (DLC)-coated plowshares that would slide through the soil like a hot knife through butter, thereby requiring less fuel.

According to the Fraunhofer scientists, there's more than a fraction too much friction when it comes to plowing fields. They claim that around 50 percent of the energy used when plowing or harrowing is lost as a result of friction between the plowshare and the soil. With farmers in Germany alone going through nearly a billion liters of fuel every year to work their land, that adds up to a lot of wasted fuel and money.

In an effort to create plowshares that create less friction and therefore require less power and less fuel to drag through the soil, scientists at Fraunhofer Institute for Mechanics of Materials IWM in Freiburg and their partners in the RemBob project are working on DLC-coated plowshares. They say they have already been able to reduce the friction by half, with the power required by the tractor pulling them reduced by as much as 30 percent in some tests.

Fuel savings aren't the only benefits for smoothly cutting plowshares either. Since not as much power is required to drag them through the soil farers can use smaller tractors or the same sized tractors could be run in partial load with longer repair and maintenance intervals. Smaller, lighter tractors would also mean a reduction in soil compaction that would result in better quality soil that is easier to work and absorbs water better.

Additionally, DLC coatings would provide protection against corrosion and wear. The high-durability steels currently used for plowshares suffer visibly if used for a prolonged length of time.

"A tine on a circular harrow can lose 50 per cent of its mass through wear every season," says physicist and trained fruit farmer Martin Hörner from Fraunhofer IWM.

But with soil, sand and stones wearing down conventional coatings in a very short period of time, plowshares have not been coated up to now. And although DLC coatings are able to withstand the extreme stresses and strains of plowing, the coating would chip and splinter because the underlying steel deforms more easily making it an unsuitable substrate for the more rigid DLC coatings.

For this reason, the Fraunhofer researchers and their project partners are field testing plowshares made of different materials, including nitriding steel, glass-fiber-reinforced plastic and tungsten carbide. The next goal of the project is to plow at least 20 km (12.4 miles) of ground before the coating fails.

"If we achieve that, the wear-free plowshare will be within touching distance," says Hörner.